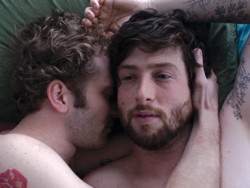 But the unexpected relationship they develop gives both women the strength to face the personal tragedies in their pasts.

Conn’s film upends traditional prejudices regarding a woman’s age, beauty and sexuality through depicting tender and joyous lovemaking scenes that will turn any theater screening this film into an instant sauna.

For those who love San Francisco, Travis Mathews’ locally shot sexual drama “I Want Your Love” presents plenty of familiar non-touristy sights. But “I Want Your Love” truly scores by its balancing heavy sexual scenes with believable emotional conflict.

Jesse (Jesse Metzger) claims he’s leaving San Francisco for his father’s place in Ohio so he can work on his art. Yet even at two days before his expected departure, the aspiring artist is still uncertain about his commitment to his drastic move.

Unbeknownst to Jesse, his roommate Jorge plans to throw a surprise party for him. Ben, Jesse’s comfort food boyfriend, is one of the invited guests. By the party’s end, these three characters will change in different ways.

Mathews uses various indirect means of giving the characters more depth than the norm in films of this genre. Jesse’s backstory is filled in courtesy of several friends’ comments at a party. The crackle of a vinyl record becomes a nice audio cue for smoldering passion. Jorge’s own ambivalence about having boyfriend Faren move in gets conveyed nicely by his passive-aggressive reaction to Faren’s cleaning up his familiar mess.

Fans of heavy cinematic sexual action can rest assured that the film delivers its fair share of same. Mathews merely makes sure that when sex scenes occur, they organically arise from the story rather than out of a need to keep the viewer aroused. The hard penises seen over the course of the film, though, are likely to arouse envy in those lacking similar anatomical gifts.

Another shortcoming of this low-budget film is its occasionally inaudible soundtrack. This is a film whose mumbled dialogue may not be heard in large theaters unless the volume is at 11.

In the end, though, “I Want Your Love” delivers pleasure by turning its sex scenes into vital moments of character development. One can definitely say that Mathews’ film offers a decidedly satisfying approach to the penetrating character study.

Frameline 36’s “Queer New Wave” retrospective demonstrated that, despite the passage of two decades since Frameline 36 awardee film critic B. Ruby Rich coined that term, time has not diminished the freshness and power of the four films selected to represent the best of 1990s queer film.

The spirit of the films falling within this sobriquet can be summarized in this apparently simple quote from Gregg Araki’s “The Living End”: “Don’t you get it?We’re not like them.”

Queer existence has been marked by pressures both external and internal to find happiness solely by finding a way to fit into the larger society. Whether it’s by marriages aimed at convincing others one was straight or by undergoing “ex-gay” therapy, the underlying assumption was that being LGBT was an aberration needing social control to maintain a supposedly beneficial communal stability.

Yet that assumption of non-conformity in sexual orientation as a social evil is precisely what the films screened in Frameline 36’s retrospective reject. If the protagonists in these films seek a place in their worlds, the path to that place involves passing by the milestones of self-acceptance and independence.

While this reviewer missed the Araki film, Ana Kokkinos’ “Head On” captures that dynamic with the relationship between closeted Ari and openly transgender cousin Johnny/Toula. Both characters have little likelihood of fitting into the larger Australian society. But where Johnny/Toula independently asserts her orientation to great personal cost, Ari’s reluctance to stand for himself doesn’t help him avoid his inevitable social collision.

Alex Sichel’s “All Over Me” creates an indelible coming-of-age film for outsiders of all sexual orientations. Alison Folland’s Claude makes the mistake of assuming personal happiness can only be achieved with attractive best friend Ellen. However, Claude’s friendship with gay musician Luke and her budding romance with guitarist Lucy helps give this baby dyke the strength to find something better.

Cheryl Dunye’s unique “The Watermelon Woman” effectively blends documentary, romance, historical research, film history, sexual/racial politics, and a hilariously awful karaoke performance to incredibly inventive results. Cheryl’s quest in the film raises the disconcerting question of how one can use history to build one’s place in society when pieces of that past are lost or disputed.

“Philadelphia” may have won the Academy Award. But the New Queer Cinema films screened at Frameline offers a still honest and timeless portrait of the LGBT community.

“Dearly Beloved” is the umbrella title for a program of documentary shorts on the struggle for marriage equality. Antony Osso’s “The Devotion Project: More Than Ever” grabs tearjerker honors. It traces John and Bill’s amazing 54-year relationship through military service, funding college education, and elder care. For those convinced that gay relationships are inherently short-lived, here is evidence to the contrary.

“Marriage Equality: Byron Rushing and the Fight for Fairness” from Thomas Allen Harris provides a portrait of the Massachusetts state representative who brought the case for marriage equality to his state’s black community. While the importance of Rushing’s work can’t be denied, the film ultimately fails to be more than a puff piece for Rushing.

Offering bigger disappointment, though, is James Chambers’ “Citizen Change.” Its recounting of the East Bay activist efforts leading to Berkeley’s passing America’s first domestic partnership law certainly covers important history. It dispels preconceptions regarding the motivation and tactics of those activists. Yet this well-intentioned history’s impact is undercut by its primary reliance on talking head recollections. What works for Studs Terkel doesn’t work visually.

(“A Perfect Ending” will be commercially released by Wolfe Video.)