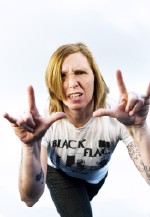 Patty Schemel just wanted to preserve footage on some Hi-8 tapes she’d shot in the 1990s. But those tapes consisted of over 40 hours of rare footage of the ex-Hole drummer’s days with friend Courtney Love’s band. With Schemel’s cooperation, preservationist/director P. David Ebersole used that footage as the spine of his Frameline documentary “Hit So Hard.” It recounts the story of Schemel’s rise in the grunge scene, her succumbing to addiction, and her eventual recovery.

Schemel talked via e-mail to Beyond Chron prior to the film’s upcoming screening.

Beyond Chron (BC): When you had gone into your downward spiral and then recovered, what kept you from destroying the tapes or selling them to grunge collectors?

Patty Schemel (PS): I was hesitant to even show the tapes to anyone, as they were so private. So the thought of selling them wasn’t ever something I considered.

It took a lot of time before I was comfortable telling [P. David Ebersole] about the tapes. Of course, I trusted him with the material and the story.

And I never would have destroyed them. I’m grateful that even during difficult times I was able to preserve them, as there are many other mementos that were lost.

BC: Did any material degrade so badly that it couldn’t be saved?

PS: There were a few tapes that had degraded. One tape in particular wasn’t usable at all, unfortunately.

BC: Marysville sounded like the type of place where LGBT teens would have needed to hear “It Gets Better.” How did you manage to survive as an out lesbian in that hostile environment?

PS: That’s the point. I didn’t come out until I went to Seattle and was able to be with more like-minded people. In Marysville, I got into punk rock and took trips to Seattle whenever I could. I also was inspired by figures like Klaus Nomi, David Bowie, and Patti Smith. With music, I knew there was more out there.

BC: Was drumming perceived as an aggressive band role belonging mainly to men?

PS: Yes. Rock ‘n’ roll was for boys, that’s why I wanted to do it. It’s still perceived as a male-dominated industry. How many women drummers can you name? That’s why I’m really devoted to my work with the Rock ‘N’ Roll Camp For Girls. It’s really important to let girls know that they can play rock! I want to give them the tools to help them succeed.

BC: The anger in Hole’s music came at the start of the American social and economic inequality begun during the Reagan years. Between those days and now, how more aware do you feel America is of the pain and rage that inspired Hole’s music?

PS: In the ’80s during the Reagan years, there was so much perceived oppression. It was a fertile time for the underground to revolt. People wrote songs about discontent or painted or wrote books.

However, I don’t necessarily feel that America today is aware of the pain and rage of that time. Most of today’s youth is inspired by the music, but not necessarily of the feelings that drove it. Back then, we didn’t have the Internet and this “instant gratification,” so we wrote our feelings in music and zines and there was more of a local or community feel. Now, with the Internet, youth has everything at their fingertips. But the community is online, rather than with your neighbor.

BC: Would you say the pain from being extra-emotionally sensitive and creative combined with the pressures of Hole’s fame and your family’s history of alcoholism created an emotional perfect storm that sparked your downward descent?

PS: I never really looked at it that way, but that is true. It was tough because I was clean and sober when we began the recording process, so I didn’t have anything to “blame.” But at the same time, that meant something was wrong with my playing. So in that regard, my artistry was being attacked, not just the fact that I was using. Since I felt like my artistry was in question, then yes, it was easy to turn to drugs.

BC: Do [your] dogs provide an emotional balance to the sometimes cruel realities of pursuing your art?

PS: Absolutely. Having a home life with my family and my dogs definitely provides the stability that I crave. Dogs are spiritual creatures, they accept you unconditionally. Having that reminder of spirituality and acceptance every day helps me have faith.

BC: It seems de rigeur that once you reach a certain level of fame, you write off less-successful peers. Yet Courtney Love provided an incredible amount of support and access to help make “Hit So Hard.” Could you talk about this bond between you two that ultimately withstood your struggles with addiction?

PS: Success is a matter of opinion…I measure “success” not by material wealth or power, but by interpersonal relationships. In that regard, Courtney and I have maintained a very successful relationship. Sure, we have disagreed. But ultimately, we have been through a lot together. I appreciate her support, and she is of course a part of my story.

BC: Watching your old tapes again eventually made you decide to do this film. What particular recording provided the “aha” moment which made you commit?

PS: There wasn’t really one moment. But over the course of the summer watching the tapes, I got more comfortable with the material and the questions that P. David was asking. With the benefit of time, I was able to reflect on what happened. Over the course of the years we made the film, I was able to open up more and let the film process open up. It ended up being really healing for me. I’ve been able to mend my relationships with Melissa [Auf der Maur] and Eric [Erlandson] and have been able to let go of lingering resentments.

(“Hit So Hard” screens June 19, 2011 at 3:30 PM at the Castro Theatre (429 Castro Street near Market). Director P. David Ebersole and subject Patty Schemel are both scheduled to attend the festival. Advance tickets can be ordered either online at www.frameline.org or in person at Superstar Satellite (474 Castro Street near 18th Street). As of this writing, tickets are still available.)