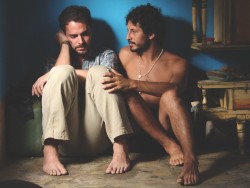 Tim Wolff’s documentary “The Sons of Tennessee Williams” looked at how gay Mardi Gras krewes arose in New Orleans during the 1960s. Home movies, period footage, and reminiscences by survivors helped paint a portrait of organizations which helped New Orleans gays to hide in plain sight during the city’s crackdown on “sexual deviants.” The gay krewes’ Mardi Gras balls provided both a chance for artistic revenge against straight society and a safe space for gays to be open.

The award-winning team behind “The Gymnast,” writer/director Ned Farr and actress Dreya Weber returned to Frameline with a new drama which personalized the cost of DADT (Don’t Ask, Don’t Tell.) The drama in question, “A Marine Story,” concerned ex-Marine Alex Everett (Weber) getting reluctantly recruited to help train 20-year-old delinquent Saffron (Paris Pickard) to be suitable armed forces recruiting material. But that summer training process also forced Everett to confront her personal aimlessness thanks to a DADT inquiry that permanently derailed her military career.

Farr and Weber clearly deserved points for doing their homework on the lives ruined by DADT. Weber also did enough research and training to make the Marine background of her character credible. Whether it was holding her ground in a barroom fight or strictly training Saffron, those sequences appeared natural. Pickard’s transformation from defiant delinquent to woman with a real life goal also worked well.

Where the film fell badly flat was its lack of an emotional heart, which shouldn’t have happened. Alex awkwardly tried to come out of the closet; Saffron had to confront her survivor’s guilt. Yet space for dramatically dealing with these problems got shoved aside for an emotionally empty violent confrontation. In short, this was a disappointment.

What obligations does a person owe a loved one? What happens when one has competing obligations to two different loved ones? Javier Fuentes-Leon’s Sundance award-winner “Undertow” asked these disturbing questions in the context of a bisexual love triangle. Its setting was a very religious fishing village on Peru’s Cabo Blanco coast. Well-respected Miguel (Cristian Mercado) formed the triangle’s apex. Mariela (Tatiana Astengo), Miguel’s wife, was pregnant with the couple’s first child. Openly gay painter Santiago (Manolo Cardona) wanted his clandestine affair with Miguel to become open. Yet Miguel doesn’t want to surrender his status in the village. The consequences of a freak accident wound up complicating Miguel’s life.

“Undertow” proved to be one of Frameline 34’s most beautiful films thanks to its gorgeous images of the Cabo Blanco beaches and
coves and its realistically attractive male leads. Ironically, this physical beauty contrasted nicely with the homophobic ugliness lurking in the villagers’ hearts. “’Brokeback Mountain’ by the sea” may make a nice tagline, but Fuentes-Leon’s stunning first film earned its emotional peaks and valleys.

Mercado, Astengo, and Cardona collectively held up the love triangle’s points. But strongest dramatic interest came from Mercado’s performance. Mercado made the viewer believe in the sincerity of Miguel’s love, yet also hate the fisherman for delaying choosing one lover over another. In the end, “Undertow” demonstrated how love can be both a unique pleasure and the worst kind of trap.

Bobby Sheehan’s documentary “Arias with a Twist: The Docufantasy” was not the film for those who preferred hard-hitting or mind-numbing documentaries. Instead, the film was a wondrous cinematic window into the work and lives of two outrageously talented avant garde artists.

Joey Arias is a drag artist and cabaret singer. Basil Twist is a puppeteer whose puppetry work includes choreographed sliding decorated screens and swimming puppets in a large tank. Together, their collaborative show “Arias with a Twist” mixed pop culture tropes to create such bizarre moments as Arias singing on a spinning operating table before a group of alien puppets. Thanks to excerpts from the show, the viewer became jealous that he or she wasn’t among the 70 people who watched performances of “Arias with a Twist” in its microscopic theatrical home.

Yet the film proved more than an infomercial for avant garde theatre. It was an endearing portrait of two talented artists’ friends and influences. Among that list were such names as Klaus Nomi and Jim Henson. More importantly, the film allowed viewers to see the avant garde artistic cauldron that was New York City’s Lower East Side in the 1970s and 1980s. What those artists lacked in financial resources was surpassed by sheer invention and pathbreaking creativity.

Cynical viewers will hate Sheehan’s sunny portrait of two artists loved and respected by their peers. The rest of us will settle for being dazzled by Arias’ and Twist’s inventiveness.

Guaranteed to raise viewer hackles was Adriana Maggs’ small Canadian film “Grown Up Movie Star.” How a character discovered and acted upon their sexuality disturbed mainstream sex-phobic American audiences. But that problem was compounded by the knowledge that the two characters in question were a 40-year-old father and his very precocious 13-year-old daughter. Ray (“Big Love”’s Shawn Doyle) dealt badly with both the sudden departure of his wife for Hollywood and his own burgeoning gay relationship with the school physical education coach. Ruby (Tatiana Maslany) looked forward to discovering sex, whether it was with a newly arrived student
from America or Ray’s wheelchair-bound best friend. Needless to say, the father and daughter found different sorts of trouble during their discoveries.

Maggs’ script sported some wonderful one-liners. Yet it was Maslany’s performance as Ruby that left the strongest viewer impression. In Maslany’s hands, Ruby turned the much berated “girl gone wild” into an honest yet disconcerting portrait of revenge against parental emotional abandonment and sublimated rage at her backwater Newfoundland town. Maslany deservedly won an award at Sundance 2010 for her performance.

(“Undertow” will be commercially distributed by Frameline Award-winner Wolfe Video.)