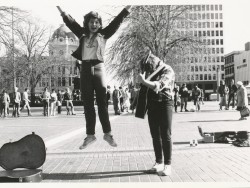 Ties of guilt and family obligations are the reference points for the metaphorically titled feature “The String.” This familiar theme gets an intriguing twist by director Medhi Ben Attia through its Tunisian setting and a performance by the legendary Claudia Cardinale as Sara, the guilt-inducing mother. The Middle Eastern setting allows Attia to present a portion of the Middle East where Western influences co-exist with conservative religious and cultural traditions. Stonings may not occur around every corner, but lacking guilt about gayness can be condemned as a path to Hell. Such expressions of intolerance are outweighed by the relative openness of one character’s lesbian relationship and the sight of another character’s nicely shaped naked derriere.

The film pleasantly lays out its characters and problems until Sara gets incontrovertible proof her son’s gay. After that, it drifts emotionally and feels overlong until the titular string finally is tested. “The String” ends up a mildly amusing dramatic trifle.

Can Suzi Graf’s documentary “Lost in the Crowd” provide moments of “aha” insights to San Francisco audiences concerned about Castro homelessness? Admittedly, the homeless LGBT youths followed over seven years live on the streets of New York City. Yet the causes of their plight, such as religious intolerance and abusive parents, will feel very familiar to local residents. One also sees parallels in the inadequate resources given to nonprofit organizations trying to help these homeless kids. The film’s The Neutral Zone only has funds for ten sandwiches a day for a clientele that’s probably several times larger.

In presenting these stories of a frequently scapegoated population, Graf performs a valuable public service. Those good intentions do balance a film which doesn’t quite manage to touch the heart as often as needed.

Several decades later, Mateo Guez’ “Off World” shows things have not changed on Smoky Mountain. Guez wants to raise viewer awareness of the plight of the slum’s children through his story of a man’s search for a brother left among the garbage. This quest is rendered in sometimes striking images, such as one of a couple standing behind a lighted window.

Yet Guez’ film lacks anything like the visceral punch of Brocka’s melodrama. At the thin line between meditative and soporofic filmmaking, “Off World” unfortunately falls on the latter side of the divide.

James Rasin’s excellent documentary “Beautiful Darling: The Life and Times of Candy Darling, Andy Warhol Superstar” has passion to burn. The former Warhol superstar’s life is rendered through photos, performance footage, and interviews with still living friends and compatriots. But the film’s emotional heart belongs to the story of Darling’s relationship with best friend Jeremiah Newton.

Darling’s desire to be a Kim Novak-like Hollywood star may be a classic American dream. But the sincerity of that desire couldn’t revive the defunct Hollywood studio system. Rasin shows Darling’s incredibly skillful impersonation of female glamor would never trump the biological fact that she was born James Slattery. Chloe Sevigny’s readings from Candy’s diary capture both the self-deprecating awareness and the heartbreaking dreaming beneath the glamor.

Rasin presents Newton on balance as a friend to the end. Darling’s former roommate preserved as much of the star’s memorabilia as he could. Yet the director also shows Newton’s self-imposed blindness regarding Darling’s probable turn to prostitution.

A couple of Darling’s contemporaries come off very badly in “Beautiful Darling.” Fran Leibowitz displays an unhealthy streak of transphobia. Warhol himself seems to have kept Darling around for personal amusement until he tired of her. Some audience members may end up wishing Valerie Solanas displayed better marksmanship.

Did Candy want her life to embody the classic tragic heroine? Rasin leaves that question unanswered. What’s clear is that this film is a powerful tribute to a beautiful dreamer.

Will Cheryl Dunye’s “The Owls” provide an inventive butt kick to LGBT film’s thematic inertia? Its portrait of a quartet of older wiser lesbians (the titular owls) creatively mashes together relationship drama, suspense thriller, and documentary commentary. The resulting mix exposes the limitations of genre storytelling and raises ambiguities regarding its onscreen drama. Whether Dunye’s film actually inspires artistic theft by later filmmakers is an open question.

The loss of innocence story gets a nice twist in Julia Solomonoff’s “The Last Summer of La Boyita.” In this low-key Argentine gem, the emotional innocence of central characters Jorgelina and Mario get lost to older people’s prejudices. Innocent play gets twisted by whispers and disapproving looks into an untoward relationship. But adult non-acceptance of Mario’s intersexual nature proves a breaking point. Jorgelina accepts Mario’s nature; the boy’s parents prove far less welcoming. By story’s end, happiness and sadness will commingle.

How could a documentary about a pair of yodeling twin lesbian singer-comedians from New Zealand turn out to be an incredibly endearing film? Leanne Pooley’s award-winning documentary “The Topp Twins: Untouchable Girls” answers that question with a warm and affectionate portrait of subjects Jools and Lynda Topp. These honest and friendly sisters combine inclusive comedy, political activism, and country-western music to create what Billy Bragg calls an “anarchist variety act.”

Performance footage of the sisters’ songs mixes with footage of their involvement in humanizing their country’s lesbian/gay movement and direct ant-apartheid action. The sisters’ eccentric comic characters such as Belle and Bell Gingham or Dilly and Prue Ramsbottom may confuse non-Kiwis. But Pooley’s film shows no doubts why these two sisters are treated as New Zealand
national treasures.

(“The Topp Twins: Untouchable Girls” won Frameline 34’s Audience Award for Best Documentary. Best Feature Film winner “The String” will be distributed by TLA Releasing. “Beautiful Darling” is a Sundance Channel co-production, so it may eventually be broadcast on the Sundance Channel.)