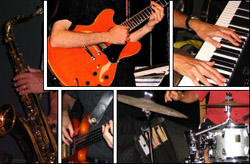 Bay Area quintet Fortune Smiles was formed by guitarist Ted Nirgiotis in 2007 to explore beyond traditional straight-ahead jazz by blending the creative improvisation of modern jazz with rhythms and harmonies from popular music styles such as Latin, Brazilian, funk, fusion and the blues. He has been fortunate to be able to recruit four experienced musicians to join him for this project all of whom have both a deep knowledge of jazz, as well as familiarity with a wide variety of other types of music. The group has been building up a large repertoire of lesser known standards by masters such as Wayne Shorter and David Samuels, and is currently focusing on incorporating more original songs. They released their first, eponymous CD this fall, and will be playing music from it at the upcoming Yoshi’s show. Several new original compositions will also be premiered.

The liner notes from the group’s new CD provides a glimpse of this fine album, “Featuring Ted Nirgiotis on guitar, Leonard Sklar on tenor sax, Gary Monheit on piano, Dan Krimm on fretless electric bass and Matt Willis on drums, Fortune Smiles draws on its members’ experience in a wide variety of musical forms, including classical, progressive, rock, Caribbean and Latin jazz (plus stylistic flavors gathered from around the world such as Indian and Hawaiian) to create a unique and eclectic jazz sound.

This self-titled album includes a selection of the band’s favorite tunes from the repertoire, showcasing a journey through a range of moods, textures, and styles.

The album begins with a tune drawn from Dave Samuels’ Caribbean Jazz Project: Ivory Coast, a rollicking 6-meter groove with roots in West African music, treated with fresh western harmonies and modal solo sections. Following that is Walden by bassist Dan Krimm, a lilting jazz waltz with an airy melody flying over a series of constantly modulating keys, resting occasionally on modal vamps.

Next up is Wayne Shorter’s touching homage to his wife Ana Maria, who was tragically lost aboard TWA flight 800. A poignant solo piano introduction by Gary Monheit leads to a gentle Latin-flavored groove with a melody both hopeful and admiring, but repeatedly interrupted by an ominous section filled with harmonic tension and sharp rock-based drums. Then comes Airto Moreira’s spirited 7-meter samba Mixing to lift the energy with a trundling groove punctuated by a sharp rhythmic motif played by the band in tight unison.

The program continues with The Jody Grind, a classic Horace Silver Latin-rock 12-bar blues head, on which the band settles into a steady dance beat with everyone getting a chance to offer their improvisational comments. That’s followed by Eddie Harris’ popular jam tune Freedom Jazz Dance, with a soft-funk groove that evolves over an extended modal exploration.

The penultimate track is Gary Monheit’s nostalgic ballad Last Time, introduced with another contemplative solo piano invention, and leading to a smoky melody seemingly reflecting on the intersection of past, present and future, ending with a pending “dominant 11th” chord as if delaying a final parting. Finally, a rousing salsa version of Benny Golson’s iconic Killer Joe cleanses the palette with a toe-tapping, hip-swinging party twist on the old cool classic, with a tight-pop ending to leave the listener tidily resolved.”

E. “Doc” Smith is a musician and recording engineer who has worked with the likes of Brian Eno, Madonna, Warren Zevon, Mickey Hart, Paul McCandless and Jack DeJohnette among others. He is also the inventor of the musical instrument, the Drummstick. He can be reached at edocsmith@comcast.net