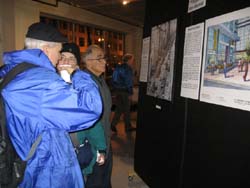 The luminous past of a much-maligned San Francisco neighborhood was brought to life Wednesday evening at the opening of “Forgotten Mid-Market.” The unique exhibition showcases a collection of photographs from a private collection of the little remembered heyday of the Mid-Market neighborhood, a stretch of Market Street near Civic Center. The exhibition is at Red Ink Studios at 1035 Market Street and will run until February 17.

The exhibition demonstrates a little remembered piece of San Francisco history. From the 1930s to 1970s, the Mid-Market was the entertainment center of the Bay Area with restaurants and theaters, including the popular Paramount and Fox theaters. The area was also a transportation hub, and was nicknamed “The Great White Way” because of its neon signs.

Television and home video hastened the decline of the neighborhood, which currently contains few remnants of its colorful past. Most notably, a 1967 beautification law called for the removal of the theater marquees, leaving little evidence of the grand movie palaces that used to line Market Street.

Wednesday night’s well-attended event also included a book signing by Jack Tillmany, author of “The Theaters of San Francisco,” and much discussion about the future direction of the neighborhood.

The show is particularly relevant as the Board of Supervisors is expected to make key decisions in the next few months about the area’s future. The area could be classified a Redevelopment Area, opening it up for private development.But one neighborhood activist said that he would rather to see a community-centered process.

“Restoration is a much better goal than redevelopment,” said Bobby Dew, a tenant representative at the National Hotel. “With gentrification it would be easy to price the artists out of existence. That’s a consideration that redevelopment doesn’t take into account.”

Bobbi Lopez of the Central City SRO Collective, a project of exhibit-sponsor Tenderloin Housing Clinic, said that the photos offer a glimpse of what the neighborhood could become.

“The most striking image to me is the picture of the Paramount Theater in 1956,” said Lopez, a chief organizer of the exhibit. “It was filled to the brim with people. It’s now across the street from where the exhibit is. All you have to do is shift your eyes a few inches to feel the loss of this great theater.”

Lopez added that the neighborhood’s development should be focused on restoring a sense of community to the area.

“You’ll never be able to bring a street back five decades,” she said. “But what you see in these photos is that the streets are filled with working people. It brings to question: why don’t we have that kind of a downtown now?”

To purchase a discounted copy of Jack Tillmany’s ‘Theaters of San Francisco’ for $15, come to the second floor of 126 Hyde Street.