by Tommi Avicolli-Mecca on September 4, 2007 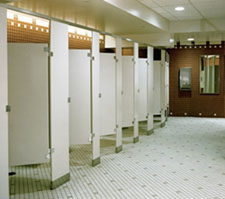 Forget terrorist attacks. America has a new threat at our airports, and it has nothing to do with people from the Middle East with last names no one can pronounce.

Ever since conservative Senator Larry Craig (R-Idaho) was arrested at a Minneapolis airport men’s room for allegedly tapping his foot in a homosexual sex code, panic has struck America’s airport bathrooms. Therapists across the nation report a 800.78% increase in pee-shyness, the inability of men to urinate at urinals when other men are present in the room.

Medical doctors are also seeing a 450.45% increase in serious bowel obstructions due to men at airports holding it in, rather than risk catching someone peering into their stall while they are trying to do their business.

“It’s really a serious and tragic situation,” said Dr. Albert Fraud of the Department of Psycho Babble at a prestigious university in Salt Lake City, Utah, “America’s confidence in its airport bathrooms is at great risk. A nation that isn’t comfortable taking a crap is bound to be full of it.”

Congress isn’t just sitting on the potty and doing nothing. The nation’s highest legislative body just passed a new “Craig Alert” law to warn passengers of the imminent danger to our airport bathrooms. It will be issued by Homeland Security when a suspected predator is in the vicinity of an airport.

Homeland Security will ask Congress for $50 billion to employ agents at every airport bathroom in America. All the presidential candidates except for Dennis Kucinich are supporting the request. Democratic hopeful Hillary Clinton said that $50 billion was “probably too low.”

“No amount is too great to keep America’s bathrooms safe,” said Clinton, who added that at least her husband didn’t do it in an airport bathroom.

In a special address to the nation last night, President George Bush promised that America will have a “no tolerant” policy towards those who do “that sort of thingie” in airport bathrooms. “We intend to employ a surge in troops to remedy the situation.” Reminded that the bathrooms were in the U.S. and not Iraq, Bush replied, “Do you want the terrorists to win? That’s what they do, confuse people.”

Newspaper editors, meeting in Washington for their annual power breakfast, have promised to put the alert above the fold on the front pages of newspapers. Said the editor of the Washington Post, “There’s nothing more important than safety at America’s airport bathrooms. Our city’s infrastructures can fall apart, we can even lose the war on drugs, but if a guy can’t go into an airport bathroom and take a crap in peace, then there’s no hope for any of us.”

Fundamentalist Christians are calling for the death penalty for convicted airport bathroom foot tappers. Said one preacher, “It’s what Jesus would’ve wanted. He didn’t tolerate such things in airports in his day.”