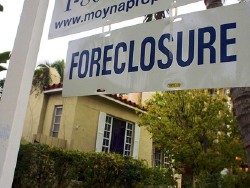 Earlier this summer, Countrywide Financial’s most famous troubled customer received an altruistic bailout that saved his home. Now months later, despite attention from the highest levels of government, hundreds of thousands of anxious homeowners are still waiting for their reprieve.

Back in August, high-profile developer Donald Trump purchased the 7,000 square-foot home of “Tonight Show” sidekick Ed McMahon. He then leased it back to the 85-year-old TV personality, allowing McMahon to avoid foreclosure. “How could this happen?” Trump asked at the time.

Not-so-famous homeowners across the country are asking the same question. Few are getting specific answers.

Foreclosures continue at a record pace, according to the latest data. Just last month, 84,000 homeowners lost their homes despite calls from Congress to freeze foreclosure activity, a $700 billion bailout that was intended to buy toxic debt and an $8.68 billion legal settlement with Countrywide Financial Corp., the country’s largest mortgage broker.

Undeterred, the grassroots Foreclosure Freeze Movement that started in San Diego, Calif. with a simple protest less than a year ago has enjoyed enough success to press on.

The progressive idea of stopping the glut of foreclosures seemed like the wishful thinking of a radical fringe that gathered in San Diego in December 2007 to protest Countrywide’s predatory lending practices. Faith Bautista, executive director of the Mahubay Alliance, organized the protest in the hope of drawing attention to victims of a coordinated plan to sell risky, high-cost loans.

“We want to send a message that it can be done here, that this pattern can be changed.” Bautista said. “The City Council has to realize that every half hour another family is losing its home and something needs to be done.”

The conservative-bent city council and mayor were less than enthusiastic supporters. But the city’s rogue city attorney, generally despised by the mayor, the conservative newspaper and the business organizations, enthusiastically joined the effort.

Aguirre, a Democrat, became the first city attorney to sue a major lender when he sued Countrywide along with attorneys general from Illinois and California. Many other states soon filed suits of their own.

A string of victories followed for “The Movement,” as Aguirre and others like to call it. States like Massachusetts and California approved legislation restricting lenders from foreclosing on homes without taking steps to mitigate the loss.

Emboldened by the high-profile attention, The Greenlining Institute and The California Reinvestment Coalition dashed off a letter to Brown and to Bank of America Chief Executive Ken Lewis demanding a temporary moratorium on Countrywide foreclosures.

Though both Brown and Lewis spoke with The Greenlining Institute’s General Counsel Robert Gnaizda, neither supported a freeze on foreclosures.

Sensing the momentum and frustrated by Brown’s unwillingness to act, Aguirre sided with Gnaizda and sought a temporary injunction in court against Countrywide foreclosures.

“Saving neighborhoods by keeping families in their homes is a better option than foreclosure,” Aguirre said, “and a national consensus supporting that wisdom is galvanizing. We are better served if we turn off the automatic foreclosure switch.”

“It’s really easy for Aguirre to make statements and what not,” Brown said, “but we have to act in a responsible way.”

But Aguirre wasn’t done. In September, he lobbied the San Diego City Council to declare a “foreclosure crisis.” The city attorney made his pitch during a council meeting, in which activists like Gnaizda and Bautista, a representative of the FDIC and members of the state Assembly spoke in favor of the resolution.

The council sent the issue back to a committee for further review. But, despite the setback, The Movement had expanded far beyond San Diego and the state of California.

“This loan-modification program provides real relief for borrowers at risk of losing their homes,” Brown said.

Aguirre even called it “a home run.”

Aguirre followed his suit against Countrywide by suing Wachovia and Washington Mutual as well. Attorneys general from more than a dozen states issued a strong statement to 16 major lenders urging them to rework all predatory loans — the threat of additional lawsuits a clear and present alternative should they resist. At one point, Gnaizda said as many as 75 to 90 percent of all looming foreclosures could be avoided if the momentum continued.

But, as could be expected, investors facing the loss of billions in revised loans met The Movement’s swift rise to prominence with fierce backlash. Lawyers representing hedge funds spoke out against loan modifications and Bank of America issued statements putting them at ease, downplaying the prominence of revising loans.

Then on Nov. 4, The Movement lost its biggest ally. Voters bounced Aguirre out of office. His successor, Republican Judge Jan Goldsmith, vowed to drop the lawsuits against the mortgage lenders.

“I was not anticipating getting the shit kicked out of me in the election,” Aguirre said. “I got it from every angle: North, South, East and West. I united people who never worked together before. Unfortunately, I united them against me.”

The fight continues in daily negotiations, court proceedings and Congressional actions. This week, Gnaizda of the Greenlining Institute, went to Washington, D.C. and met with FDIC’s Bair, Speaker of House Nancy Pelosi and Rep. Barney Frank to lobby for The Movement’s goals.

“We cannot accept the Bank of America settlement as the gold standard,” Gnaizda said he told the political leaders. “Despite what Attorney General Brown says, Bank of America only expects to address 20 percent of their troubled mortgages. They don’t have the power to address those in the hands of the investors and hedge funds.”

The Greenlining Institute wants Bair and Pelosi to push for a national temporary freeze on all foreclosure activity for a period of 120 days. Legislation to that end is expected to be introduced this week, Gnaizda said.

The Attorney General’s office dismissed concerns by Gnaizda and Aguirre, saying they distort the value of the settlement. The settlement includes language, according to California Deputy Attorney General for Consumer Law Benjamin Diehl, which assures a “substantial majority of investors” are in agreement.

“We have the investors on board,” Diehl said, “so we have a program that is going to save homes.”

Clearly Donald Trump won’t save everyone, so it’s the governments turn. How effective they are remains to be seen, but rarely has a progressive movement caught fire so rapidly and rose to such a high level of prominence.