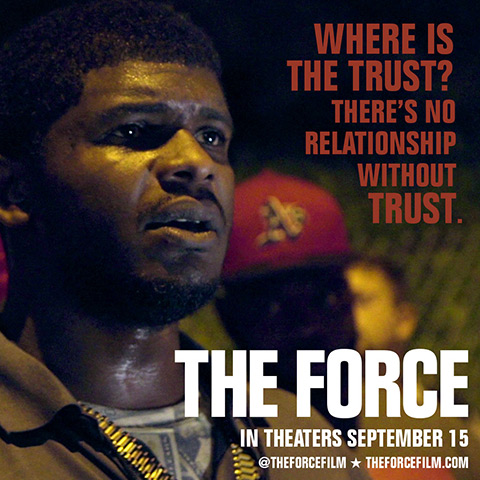 Peter Nicks’ quietly challenging new documentary “The Force” is the film needed for America’s highly polarized environment of “police vs. the public.”  Without cheerleading for either side, Nicks’ observant camera captures the cultural markers by which various public and law enforcement attitudes arise.   This powerful film does not break bread with the “both sides” pundits who mistake their simplistic judgmental attitudes for wisdom.  Instead, “The Force” finds truths in both sides of the police/public divide.  But the greater difficulty is developing from divergent attitudes mutually palatable solutions.

“The Force” is of particular local interest because its subject is the Oakland Police Department (hereafter, “the OPD”).  This police agency has the dubious distinction of undergoing the nation’s longest continual period of federal oversight.   But then the OPD’s long history of police misconduct and frequent civil rights abuses makes such an outside action necessary.

Nicks’ film follows the OPD through the tumultuous years of 2014 through 2016.  Pro-police reform Sean Whent has taken the Chief of Police reins, hoping to finally bring the OPD into compliance with federal guidelines.  Yet as Black Lives Matter rises in power, the OPD can’t seem to shake the public belief that the police generally gun down black men with impunity.

Beyond Chron readers who expect intimate portraits of the OPD a la Nicks’ previous film “The Waiting Room” will be disappointed.  Subject empathy takes a back seat to gleaning observed truths from “The Force”’s cinema verite approach.  Observing the public from inside a patrol car reveals momentary displays of caution or barely concealed hostility.

But then, members of black and Latinx communities in particular shouldn’t have to treat encounters with police officers as major causes of mortality.  Black Lives Matter’s necessary protests challenge the cultural carte blanche mainstream American society grants the police in general.  White suburban communities would hardly remain sanguine about the alleged reasonableness of police force if they were on the receiving end of chokeholds or were suddenly shot over a dozen times within seconds of a police officer’s arrival.

Then again, how much should OPD officers be resented for hewing to their personal survival philosophy?  A lesson the future OPD cops learn early is to come back alive at the end of the shift.  “Neutralizing” a potential malefactor as quickly and efficiently as possible is seen as a pragmatic way of saving lives.

Yet a heated police academy discussion already shows the police/public division over tactics in microcosm.  The spark is actual dash-cam footage of a cop pumping thirteen bullets into a black man getting out of his car.  A white male cadet loudly sees the shooting as neutralizing the black man’s threat.  But a black female cadet’s body language suggests resentment at having her dissenting views ignored or derided.

The Pastor Ben Mc Bride sequences show one constructive OPD attempt to address the department’s history of racial prejudice.  The Pastor mentions that the OPD operates in the shadows of the first police forces, the slave patrols used to keep runaway blacks in check.  He sympathizes with the officers operating in a profession which is a victim of historic identity theft.  Yet the Pastor’s sympathy doesn’t obviate the OPD officers’ struggle to bring down the high social bill of anti-police mistrust.  It’s very unlikely that outspoken racist Sheriff Joe Arpaio would let his cops near a Pastor Mc Bride.

Chief Whent’s interactions with the Oakland public show he’s definitely not an East Bay version of Arpaio.  During a 2014 Black Lives Matter protest, the Chief orders the OPD to facilitate the protest but not allow deliberate property damage or direct attacks against the OPD.  A meeting with community members unhappy with police coverage shows Whent trying to balance acknowledging community concerns with communicating the realities of police patrolling.

Certainly image plays a part in police-community trust.  During one police academy lecture, Captain Leronne Armstrong points out that one cop’s unprofessional behavior will cause a citizen to expect another cop will display an equal level of offensive or derogatory behavior.  Having an OPD cop’s unprofessional behavior immortalized as a YouTube video puts extra pressure on cops to maintain the force’s good image.

But hindsight shows it was a mistake to expand the OPD’s image with a P.R. blitz.  Publicizing through news interviews that there has been no OPD officer involved shootings over the past couple of years matters less than how the OPD handles such shootings when they inevitably happen.  Sadly for Chief Whent, four OPD fatal officer shootings of black men over the space of two months do not result in the OPD being given the public benefit of the doubt.  Further unwashable mud on the OPD’s reputation comes with the notorious May 2016 prostitute scandal.  But it’s reasonable to wonder if Mayor Libby Schaaf’s office engaged in P.R. overkill with the spectacularly brief tenures of OPD Acting Chiefs Fairow and Figueroa.

Nicks’ film offers no simple answers regarding the best way to have satisfactory police and community relations.  As a police academy lecturer points out, there will always be a level of distrust between the American public and the police.  This country was built on public mistrust of government power.  And cops are the most visible symbol of that power.  An extreme version of that mistrust can be heard among the participants of a civilian police reform group.  These civilians wonder whether any good cops exist and where they can be found.

“The Force” avoids using “law and order” to romanticize the right-wing fetish for unquestioning obedience.  But Nicks’ film also avoids discussing two hot-button public-police relations issues.  Police departments’ ready adoption of surplus military equipment to crush domestic disturbances seems to visibly reject the building community trust approach to policing.  Nor does “The Force” consider the other historic black mark on the police: their role in violently suppressing efforts by workers to fight the cruelties of 19th and 20th century capitalism.

Yet these minor quibbles shouldn’t deter readers from checking out Nicks’ powerful film.  It might open more productive dialogue regarding police and community relations.  Or at least it might inspire a viewer to hesitate before crying out “F**k The Police.”