For Our Students and For Our Profession’: Denver Educators Strike for First Time in 25 Years 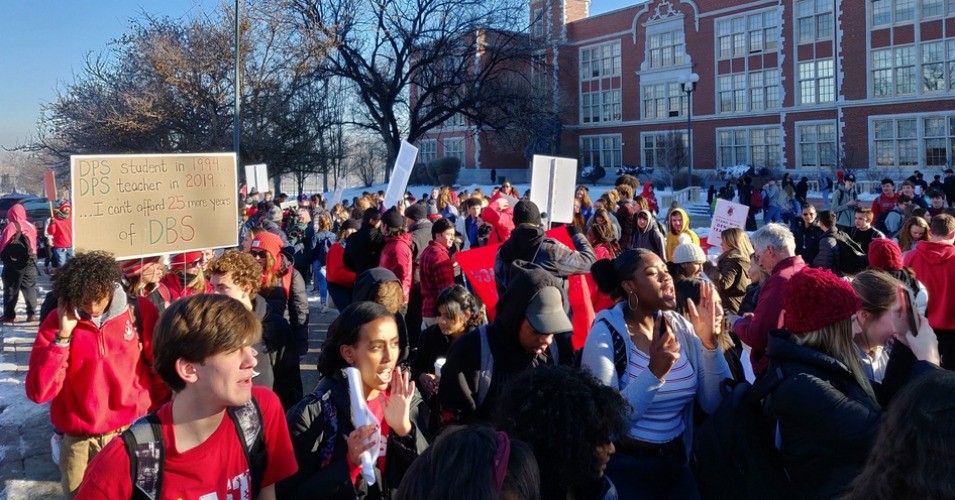 Students at East High School in Denver braved the cold weather to join their teachers in the picket line Monday as educators in the district went on strike for the first time in 25 years. (Photo: @BoulderCRC/Twitter)

(This first appeared in CommonDreams.org)

“You left us no choice, we have to use our teacher voice!”

Taking their place among a national awakening of public school educators demanding better treatment of their profession and better schools for their students, thousands of teachers went on strike Monday after 15 months of negotiations stalled.

The walkout is the district’s first in about 25 years, with teachers decrying their chronically low pay resulting from an incentive-driven compensation system, and the suffering it inflicts on Denver’s 71,000 students.

“We will strike Monday for our students and for our profession, and perhaps then DPS will get the message and return to the bargaining table with a serious proposal aimed at solving the teacher turnover crisis in Denver,” said Henry Roman, president of the Denver Classroom Teachers Association (DCTA), in a statement Saturday, after the union rejected Denver Public Schools’ latest offer to reform compensation.

Outside the district’s schools on Monday, many students braved the cold to join their teachers in demanding fair pay. Demonstrators carried signs reading “On strike for our students” and “I’d rather be teaching but I can’t afford it.” Many chanted, “What do we want, fair pay! When do we want it? Now!”

The main issue teachers are striking over is a compensation system which they say favors giving out incentives over base pay, making it hard for the district to attract and retain qualified educators. More than 30 percent of Denver teachers have been in the district for three years or less, according to DCTA.

Under the compensation system, teachers are given financial incentives to teach hard-to-staff subject areas and schools. This keeps base pay at an average of $43,255 per year, according to USA Today—an amount that makes it hard for many to make ends meet in Denver.

“Over the years,” education reporter Jenny Brundin said on NPR‘s “Morning Edition” Monday, the system “became really complicated and unpredictable. Some of the incentives would suddenly disappear or shrink. And teachers say that makes it really hard to plan or even pay rent.”

CNN shared stories on Monday of the struggles of some Denver teachers, including a physical education teacher who drives a Lyft on off-hours to cover his bills, a Spanish teacher who hasn’t made enough in nine years of teaching to start a savings account, and two teachers who are considering leaving the field because they can’t afford to live on their paltry salaries.

“We’re not asking for a million dollars,” gym teacher Sean Bowers told CNN. “We’re asking for an extra $200 to $300 per paycheck so that I can save up so that I can buy a house and live in my community and not jump from house to house.”

Over the weekend, the DCTA rejected DPS’s offer of more funding for base salaries, as the plan kept incentives in place and “lacked transparency,” according to the union.

“We are incredibly disappointed that on the last day of bargaining and less than two days before a strike, they doubled down on one-time incentives teachers do not want, and the data shows do not work to keep teachers in their schools,” said Roman. “The bizarre proposal proves what we have said during this entire process, that DPS is not interested in listening to the concerns and needs of its teachers and special service providers.”

Last month, DPS superintendent Susana Cordova came under fire for approaching furloughed federal workers to entice them with paid substitute teacher jobs in the event of a teacher strike, as 800,000 government employees languished without paychecks during the 35-day government shutdown. One local union official denounced the move as “union-busting.”

On social media, some local substitute teachers indicated that they would refuse to cross the picket line.