For Marriage Equality, It Took A Movement 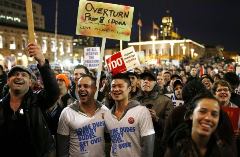 The Supreme Court’s striking down DOMA and Prop 8 sent a powerful message about the ongoing power of grassroots movements to bring social change. These rulings could not have come a decade ago. Then, even campaigns for domestic partnerships and civil unions were politically controversial. But the broader activist struggle for marriage equality brought the courts along, just as the African-American civil rights movement of the 1950’s and 1960’s brought legal rulings to support that struggle.

San Francisco City Attorney Dennis Herrera, Gavin Newsom, and other speakers at yesterday’s City Hall press conference framed the marriage equality campaign as having “kicked down doors” blocking justice, and praised those who did what was morally right rather than politically expedient. Of course, some marriage equality activists knocking down doors, like John Aravosis of Americablog were often criticized for such tactics. But they did not relent, and the movement included a broad range of strategies and tactics. By not letting tactical differences get in the way, the movement expanded exponentially and became a powerful model for all those engaged in the drive for justice.

I feel very fortunate to have witnessed the extraordinary sense of joy and fulfillment yesterday morning at San Francisco City Hall. I was not in Chicago for Barack Obama’s 2008 election night speech but watching on television it showed a similar sense of exultation among travelers on a long and torturous journey toward justice.

The Broadening of a Movement

The marriage equality movement has come a very long way.

When the long burgeoning gay rights movement burst on the national scene with Dade County, Florida’s repeal of an anti-discrimination measure in 1977 and California’s Briggs Initiative in 1978 (which made Harvey Milk a national figure), it was widely seen as dominated by middle-class white people. The next decade saw frequent stories about middle-class gay men evicting renters of color from their homes, and the continued (and wildly overstated) depiction of upscale gays as prime forces of urban gentrification.

ACT UP’s emergence in the 1980’s changed this inaccurate but stereotypical perception. The public now saw a racially diverse movement filled with people of all income levels. ACT UP also showed that the movement was not a monolith, as its confrontational tactics drew opposition from the Gay Men’s Health Crisis and other mainstream groups.

Urvashi Vaid’s Virtual Equality: The Mainstreaming of Gay and Lesbian Liberation (1995) highlighted the movement’s internal conflicts. Vaid’s perspective as Executive Director of the National Gay and Lesbian Task Force reflected the ongoing frustration of more activist-oriented gay and lesbian activists with the non-confrontational approach of many movement funders who were not only wealthy, but also disproportionately white men.

This internal movement conflict included debates about alliances with key Democratic Party leaders, and occurred as President Bill Clinton signed both DOMA and Don’t Ask, Don’t Tell. Many activists wondered what the movement was gaining from funding Democrats who backed such measures, other than White House access for top donors.

The movement was also divided over goals. Grassroots activists felt that mainstream groups were limiting the movement’s agenda to policies that Democratic politicians would accept; this put civil unions on the forefront and branded marriage equality as politically “impractical.”

These internal conflicts over pursuing marriage equality were dramatically reshaped in 2004 when San Francisco Mayor Gavin Newsom had his city grant marriage licenses to gay and lesbian couples. Newsom may have gotten the loudest applause at the City Hall press event for his leadership on this issue, as he clearly moved marriage equality to the center of the movement’s agenda.

Despite ongoing disputes over tactics and strategies, particularly over the best way to defeat Prop 8, the drive for marriage equality became a full-fledged movement following Newsom’s action. Mainstream gay leaders either embraced the cause or lost credibility. While groups remained split over how hard to press President Obama to keep his commitments on DOMA and Don’t Ask, Don’t Tell (I have a new book coming out this fall that analyzes this issue), activists like John Aravosis and Cleve Jones made sure that pressure on Obama continued on these issues and on his lack of support for marriage equality.

By the time Obama began his 2012 re-election campaign, the drive for marriage equality was in high gear. Knowing that young people strongly supported the campaign, Obama had to support this critical issue to ensure these voters went to the polls for him in November.

The movement’s breadth was expanding exponentially. When every state ballot measure supporting marriage equality prevailed in November 2012, gay marriage had gone from being falsely blamed for John Kerry’s defeat in 2004 to be seen as a boost for Democrats.

To show just how big the movement has grown, on the night before the Supreme Court ruling my older daughter, who teaches at a public high school in New York City, told me her students were really excited about the gay marriage case. These low-income, overwhelmingly Latino, African-American and otherwise non-white students are not the demographic normally associated with the marriage equality movement, but the upcoming Supreme Court ruling was “all they were talking about.”

That’s a remarkable development. It’s a tribute to a movement whose message of inclusiveness and diversity was mirrored in its strategic approach, and which will grow until marriage equality is the rule in all states.

Millions made this historic victory possible. I give special tribute to the ACT UP activists who brought an activist, confrontational, breaking down the door spirit to the broader movement. While many did not live to this day, their commitment and passion still infuses the marriage equality struggle.

Randy Shaw is Editor of BeyondChron. He is the author of The Activist’s Handbook and Beyond the Fields: Cesar Chavez, the UFW and the Struggle for Justice in the 21st Century