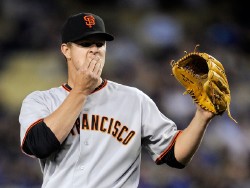 In the ninth inning of the 7th Game of the 1962 World Series, Willie McCovey’s potentially game winning line drive was caught by the Yankees Bobby Richardson to end the game. In the fifth inning of the second game of the 2010 Series, the Rangers’ Ian Kinsler came within inches of a home run that would give his team a 1-0 lead; instead, his drive bounced off the wall and he was left stranded on the bases. Edgar Renteria then gave the Giants the lead for good in their half of the fifth. That’s what happens when the Baseball Gods write a new script. And while nobody should start planning the Giants Market Street victory parade route, 2010 does not appear to be déjà vu all over again for the San Francisco Giants.

There was a vigorous debate on KNBR’s Fitz & Brooks show in the hours before Game 2 of the World Series. The issue was whether the Rangers could come back from a 2-0 deficit, or if this meant they were “done.”

After the Red Sox came back from a 3-0 deficit to the Yankees in 2004, nobody should count any team out until the end. But regardless of how the media trumpets the Rangers’ “resilience,” and recounts how they came back from a tough defeat against the Yankees and beat Tampa Bay on the road, it is fair to say that Texas has not confronted a team as multi-faceted as the Giants.

It’s also fair to say the Dallas media doesn’t have a clue. The Dallas Morning News sports headline after Game I was “Josh Hamilton: San Francisco fans were smoking weed in stands.”

Perhaps that explains the Rangers’ fielding problems. Players were looking at the crowd, not the batter.

Isn’t this what every Giant fan accepted prior to the start of the Series? Well, after scoring 11 and 9 runs in the first two games, I offer an alternative theory.

Maybe the Giants did not score much against the Padres, Braves and Phillies because no team scores well against these teams. Maybe Texas has nowhere near the starting pitching of those teams, and a bullpen that has repeatedly proved unreliable.

The Giants are scoring without Posey, Huff and Burrell hitting homers, or even driving in runs. If these guys get back on track, the Giants will really start putting runs on the board.

That’s what Texas manager Ron Washington said in anticipation of facing Matt Cain. Everyone loves Wash, but he appears to have taken the power of positive thinking beyond logic.

Matt Cain shut down the Rangers as they have not been shut down the entire playoffs. If this is how they respond to “power” pitchers, Wash needs to revise his analysis.

The Rangers got no stolen bases of consequence in Game 2, and one theft was due to Renteria dropping a sure tag. The television I’m watching has the Giants running around the bases, and the Rangers mostly standing still watching the action.

To be fair, Ranger pitchers do appear to be “running wild” to get down to the bullpen, but this is not what all the experts meant who picked them to run the Giants ragged.

Can Sanchez Deliver in Game 3?

I’m going out on a limb and saying he can and will. He must be embarrassed over his last start, and has shown he can win on the road. Sanchez is in a proving himself mode, and I think he pitches well Saturday.

The Ranger starter, Colby Lewis, has pitched well in the post-season. But he cannot match Sanchez at his best.

Can Bumgarner Get it Done in Game 4?

I don’t have the same confidence in Bumgarner as I have in Sanchez, but the 21-year starter finds a way to win. And if he or Sanchez loses and we go to Game 5, the Baseball Gods might like nothing more than for the San Francisco Giants to win their first title by beating Cliff Lee twice.

It’s never been more fun to be a Giants fan, regardless of the torture.

Randy Shaw was at the 1981 49er’s parade down Market Street, and until late September never thought a Giants parade in 2010 was even in the cards.