For Dykes on Bikes, A Lot’s Riding on a Name 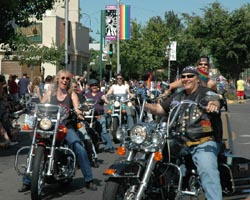 Juliet had no idea what she was saying when she asked that immortal question: “What’s in a name?” If she were alive today, she might be asking: “Wherefore art thou Dykes on Bikes?”

Who in San Francisco doesn’t know Dykes on Bikes? The amazing motorcycle group leads off the annual San Francisco Pride Parade. Who has not thrilled at the sight of hundreds of women zooming down Market Street? The answer is quite simple: Michael McDermott.

Identifying himself as a fourth generation San Franciscan, McDermott filed an appeal after the motorcycle group was granted a trademark on its name. McDermott says he finds the word dyke offensive, scandalous and immoral. He feels what the group calls itself is “disparaging to men.” Our legal system’s not buying it. In a 3-0 decision, the Washington D.C.-based Court of Appeals recently denied his suit. The judges felt that as a man he didn’t have standing to object to the word dyke.

The trademarking of the name wasn’t easy. The U.S. Patent and Trademark Office originally rejected the organization’s application because it felt the word “dyke” was vulgar and offensive to lesbians. Even when it was being used by lesbians.

Names mean a lot to people. For years, the term “dyke” or “bulldyke” was used to put down women-loving women. In the 70s, gay liberation groups reclaimed many derogatory terms for LGBT folks, including dyke and fag (or faggot). In the 80s, ACT UP (AIDS Coalition to Unleash Power) and other radical groups embraced the word “queer.” Though initially controversial in the LGBT community, the Q-word has become so popular that it’s even the name of two successful TV series.

Reclaiming derogatory words is nothing new. Black rap artists use the N-word. Other ethnic minorities also use names that were once putdowns. I’ve been known to use WOP and Dago to describe myself as an Italian. It seems to be part of the process of empowerment for disenfranchised people in this country.

Not everyone agrees. The NAACP in Detroit recently staged a mock funeral for the N-word, calling on rap artists to stop promoting it in their lyrics. In other ethnic communities, there’s also not consensus on the idea of reclaiming negative words.

One thing’s certain. The right to turn derogatory words around rests in the hands of the people whom
they hurt. It’s not up to white people to say the N-word is now acceptable, nor straight folks to decide
that dyke isn’t appropriate for a rowdy group that rips down the main thoroughfare of San Francisco on their Harleys and Kawasakis.

McDermott will just have to understand that.