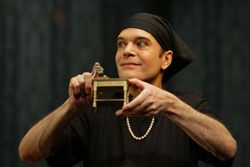 The Footlights all over town are burning overtime. It’s a summer blitz of showbiz. Some of the intriguing offerings are free, some at modest prices and other on the high end. With all the options available, there is bound to be something that you will find magical – something that will be romantic and something that is just downright bizarre. Ah yes, it’s the magic of it all.

A GOOD TRICK IF Y OU CAN DO IT! Well, Charlotte Von Mahlsdorf, a real-life German Transvestite managed to survive both the Nazis and the Communist. So, I guess that being his own wife wouldn’t be all that difficult. Jefferson Mays in the play “I Am My Own Wife” plays over 40 characters, including the controversial figure herself and the American writer who becomes intrigued by her. The first thing you see on the stage is a mysterious figure crossing the stage behind a wall of lace. Well, you got me there. I’m going to go. One always needs to know how you can become your own wife. Think of all the trouble it would save. You’d never have to ask them what they want for dinner. Cook for one and enjoy it for two. What a way to go. And, here’s the big advantage. You can go out anytime you want and stay out as long as you want. Opens May 3 at the Curran Theatre. Tix on sale now for this Tony Award winner. Tix are going, going and maybe gone. Available at the Box Office.

Speaking of the Tony’s – you can make it a really special evening with the Annual Gala Ticket to the Tony’s on Sunday Evening June, 5 at The New Conservatory Theatre Center. Also a fun event with other Theater Lovers. Watch it on a big screen and gossip. Who knows you may even find your lover or someone else’s. Call NCTC for Tix info. Mention my name. It won’t get you a ticket, but it will get you a smile.

The Bay Area celebrates National Dance Week. There will be over 200 FREE dance performances April 25 – May 1. Bay Area Dance Awards are on April 26. Info and locations at www.bacndw.org. Throw those shoulders back – wear an off the shoulder T-Shirt and open toed sneakers and dazzle the crowd. But, be sure to arrive in an old convertible with a long scarf around your neck to billow in the wind. Slink out of the car to mad applause and join the dance.

More exciting things will be coming up. There is “Wicked” the prequel to Dorothy and the Wizard of Oz. A huge success here and in New York. Warm up your broom – you will be in for an explosive evening. Annie will escape the orphanage one more time singing “Tomorrow”. And here is a biggie. “Lestat” in the pre-Broadway World Premiere is coming this way. Horrors – It’s scary. It’s all part of the extensive “Best of Broadway” series that will be at The Curran, The Orpheum and The Golden Gate. And guess what, everyone’s favorite show “Les Miz” will be back soon at the Curran. I guess it’s too late for Marie Antoinette. Oh well, she would have hated it.

At the Post Street Theatre Star of Stage, Film and TV Bebe Neuwirth who has won the Tony and Emmy brings her new show to town called “Here Lies Jenny. Jenny follows a guiding star. She roams around the dark city, drawn in by haunting music. She tumbles down into a dock-side gin joint. She sings haunting songs that cast a spell over darkly handsome men. “Jenny” will feature the music of Kurt Weill, with lyrics of Bertolt Brecht, Roger Fernay, Ira Gershwin, Langston Hughes, Alan Jay Lerner, Maurice Magre, Ogden Nash and Franz Werfel. Starts May 1, with Grand Opening on May 3. Tix are on sale at the Box Office. Gee, I’m already excited and I haven’t even had a Viagra yet.

Free Things to do in Union Square. Yes, they are all legit. Every Wednesday from 10 noon to 1pm, and every Sunday from 2pm to 4pm there will be live performances of music, dance, poetry and theater this spring and summer. “Union Square is a jewel in the crown of San Francisco public spaces.” Said Mary McCue, principal of MJM Management, which overseas Union Square. “We feel the best way to keep Union Square clean and safe is by animating it with entertainment and fun events.” Adding to the festival will be a large outdoor screen in Union Square that will offer a continuous video of clips from films that are featured at this year’s San Francisco International Film Festival. That will continue thru May 5. The Square will also be the setting for a robotics exhibition presented by Neverland Productions and The Red Umbrella Art Group. There is more. On Sunday April 24 at 2pm the award-winning slam poets The Suicide Kings will shock and amaze you with their spoken word art. There is also Bluegrass festival regulars The Alexis Harte Band. They will perform on April 27 at 12 noon. We’ll get into the Squares May and June Events later. But I have to let you in on this scooplet. This fall Union Square will come alive at night with a film series on Sept. 17. Gee, film under the stars – or at least Macy’s lights. And, it’s all free!

TERESE GENECCO will star in “Drunk in Love!” A musical tribute to the famed Francis Faye. You can’t do any better than hearing Genecco sing and perform. Her star is rising. In fact according to the director Mark Gagne this show has already been booked for a New York run. Opens on July 15. Mark that down, and do it now. I will be around to check.

Spencer Day and the Crimson Club will star in this same Concert Series with the new show “Someday, Love.” Music and Lyrics by Spencer Day and directed by Scrumbly Koldewyn.
The time: a while ago. The place: a big town. It’s described as a Noir musical. It takes place in a bar. Too bad they can’t smoke. They did in all the Noir movies you know. Maybe they’ll pretend.

Also coming up in this extraordinary concert series is the famed Carole Cook in the show “Dress Up”. For that you will have to wait until August 18. But it is never too early to buy tix. Why not get the series – it’s cheaper that way. All three shows will be at the New Conservatory Theater. The New Little Big Deal in Town – headed by Director Ed Decker.

Don’t ever tell me again that there is nothing to do in this town. If none of these venues get you out and about, then you had better check your pulse. I absolutely refuse to pick you up and drive you there.