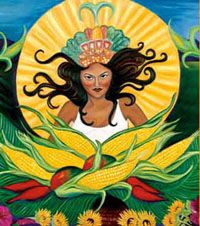 Where, in the Bay Area, are the street vendors? At Union Square, for the sake of tourists, pretzels sell for $2.00. On the fringes of Dolores Park, on a sunny day, a lone vendor sells politicized hot dogs and sausages amidst the occasional ice-cream cart. And, throughout the Mission, International in the East Bay, and small parking lots the area over, taco trucks abound. But what of New York City’s sidewalk diversity, Chicago’s wind-swept sausage carts or even Washington’s tourist-trusted vendors? In the Bay, it seems, the sidewalk supper remains a non-entity, but further south, in Los Angeles, the practice thrives, and at the soul of the movement sits a small cafe in MacArthur Park, a model for everyone, Mama’s Hot Tamales.

Mama’s Hot Tamales is an apprentice-operated training restaurant-a non-profit with funding from The Institute for Urban Research and Development. The concept, a simple one, allows some cooks to rent kitchen space in the cafe in order to produce their own food which they then resell both to the cafe for its menu and outside the restaurant on their own. Essentially, tamale makers from all over Latin America, now living in Los Angeles, receive guidance, training and assistance in starting their own food-based businesses. The results are nothing short of fantastic.

A tamal (or tamale depending on your etymology), essentially consists of a corn meal filling and any variety of accoutrements wrapped (again variety reigns) and steamed. Fillings range from the sweet, like sweetened corn and pineapple, to the savory with classic fillings like pork or chicken mole. The wrappings, which most often reflect the tamales’ place of origin more than anything else, generally find banana leaves, cornhusks or avocado leaves imparting a subtle flavor to the delicious finger-food.

At Mama’s you can choose, on weekdays, from a changing list of 12 tamales from over 7 distinct geographical locations, along with homemade side dishes and refreshments. Mama’s also has a full breakfast menu, a coffee bar, and lunch specials, but the lynchpin, as the name implies, remains the tamale in its glory. Everything that comes out of the kitchen satisfies; in fact, there is almost a palatable excitement when your order arrives.

And for good reason. The chicken mole tamale, for example, nearly overflows with the dark, chocolaty sauce, and the richness gives the corn dough an incredible complexity. The spicy beef tamale, a little drier, holds just enough spice so that the mild corn begins to act as a perfect counter-balance and welcome respite. Even the sweet tamales manipulate the basic dough in a way that invokes the essential hominess of the dish. For all of its preparation, for all of its permutations, this is comfort food-individually wrapped expressions of a home that has, for now, moved to Los Angeles.

MacArthur Park, the site of the cafe, offers much the same interpretation of home. Recent community efforts have cleaned up the park considerably, and on a sunny day the appeal is impossible to ignore. Mama’s Hot Tamales exerted a large part of that effort, and the aesthetic of a home invoked with food pervades the park and the vendors that circle it. The pushcarts themselves also come from Mama-as a functioning non-profit, Mama can rent the carts for a negligible amount for the year, allowing the vendors to make a larger profit, and thus build capital, with their own efforts.

To this point Mama’s Hot Tamales can be considered nothing short of a consummate success. Publicity has been good, and their funding steady-though both pale in the face of the product itself: spectacular food and a burgeoning community. Meanwhile, the Bay Area, despite our self-regard for progress politics and food, lacks any such effort at development or implementation. Licensing for street vendors remains elusive, and though institutions like The Tamale Lady thrive on a hipster-based, cult-like status, a real pushcart culture founders. Mama’s Hot Tamales should be a model for foodies who expect more out of food than just flavor. As a basis for community, for building reliable homes, there are few foundations more sure than food, and Mama’s is a home that the wandering cook, and the meandering gourmand, can believe in.

Caleb Zigas can be reached for comment at caleb.zigas@gmail.com