Folsom Street as the Ceremonial Center of SoMa 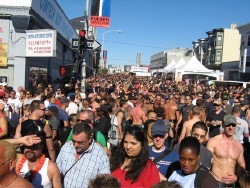 Ed Note: The SoMa Leadership Council is holding an important public meeting on the future of Folsom Street tonight, Wednesday, February 16, at 6:00 PM in the community room of the Folsom/Dore Apartments 1346 Folsom Street, between 9th and 10th Streets.

South of Market has always been a little bit funky, and most of us wouldn’t have it any other way. A lot of the housing pre-dates World War II. Between the aging flats and apartments you’ll find auto body shops, small manufacturers, Internet startups, nonprofit social services, bars, nightclubs and a grassroots arts scene that thrives even as luxury condo buildings proliferate. We are the quintessential mixed-use community.

Folsom street is rich with history. The Jackson Brewery complex can be found on the National Register of Historic Places. The Kleiber Motor Truck Company built the wagons and trucks that hauled away the debris from the 1906 earthquake. The park between 6th and 7th Street is named in honor of Olympic gold medal winner Victoria Manalo Draves, born and raised on Folsom Street.

Three generations of the Luna family operated nightclubs at the corner of 8th and Folsom Street. By the late 1970s, Folsom’s Miracle Mile had been home to nearly 30 gay leather bars, clubs and merchants.

The community has long supported the idea of turning Folsom into a pedestrian-friendly two-way street. All the great neighborhoods of San Francisco are defined by their commercial corridors.

The legislation which created the Western SoMa Citizens Planning Task Force is built around the promise of a Folsom Boulevard. Folsom Street is designated as a neighborhood commercial corridor in the Western SoMa Community Plan with community-serving businesses, wide sidewalks and good public transportation. But community plans have an unfortunate tendency to be long on promises and short on delivery.

We cannot allow this to become one more great idea that just gathers dust. Tonight, we’re bringing representatives from the San Francisco Planning Department, the MTA, the Transportation Authority, the Office of Economic and Workforce Development, Livable Cities, the South of Market Business Association and the SoMa Bar and Business Guild together to strategize over a community-based approach to accomplishing this within our lifetimes. The Western SoMa Plan is a product of the people. Let’s put some momentum behind this proposal.