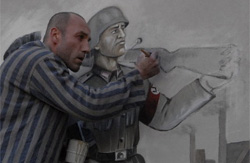 This Academy award winning film is a beyond doubt one of the best riveting movies about Jewish Prison Camps. When Karl Markovics (the main character “Sally’) is arrested by the Berlin police for counterfeiting — he is sent to a concentration camp. His reputation as an artistic counterfeiter precedes him. The Guard in charge has an idea. He wants “Sally” to counterfeit the British Pound so that he can flood the world with it and ruin the British economy. It was called “Operation Bernhard.” It was a nutty idea – but by going along with it “Sally” was able to survive. I should say barely survive. Even though he got some special privileges and was able to help a few of his cellmates, it was not an easy life. He was still treated as if he were not human.

One of the reasons the film is so compelling is because the story has rarely been told. This is a totally different look at Prison Camp living. The story is emotional and gut-wrenching…a suspenseful look at the dark side of town that you’ll not easily forget.

Not only does this movie bring us a shocking look at what went on in the ‘horror’ days – it’s masterfully filmed with grainy, washed out colors. You would be hard pressed to find realism like this again.

The Counterfeiters is a thrilling and magnificent film. It won the ‘Oscar’ for best Foreign Language film this year. Karl Markovics should have won best Actor. Do not pass up this opportunity to enjoy a wonderful, immersing experience. At Bay Area Theaters.

The Weatherman threatened every thing but raining lawn chairs the night that Amanda McBroom and Melissa Manchester arrived to sing in a special Cabaret show at the Herbst Theatre. Fearing the worst, I dressed like an Eskimo. And then the first miracle of the night started. The rain and wind stopped. The second miracle of the evening was the sensational evening of music on the Herbst stage with McBroom and Manchester

Starting off, Mc Broom immediately captured the audience with fun little tidbits – “I am the rep of the age of vinyl”, she said. Then she launched into the terrific “One More Time”, ‘Old Love’, ‘Wheels’ and Cole Porters “I’ve Got You Under my Skin.”

That is just a sample of the terrific songs where the words do matter. Later on she treated us to a fabulous ride with “Carousel” and at the end of her show she sang one of the most beautiful songs in the world — “The Rose” which she also penned for the movie of the same name. Bette Midler sang it in the film. “Dazzling” is the word that I would use about McBroom. Her arrangements were richly imagined and unbearably exciting.

The adventure was way too short for me. The audience wanted more. It was a solid Gold evening of tantalizing music. The talented Michele Brourman wrote several of the songs. She also accompanied McBroom on the piano. Heavenly.

Manchester has been hiding away for about ten years. “I took off to bring up my kids” – she said. “Now my kids are big, and they told me ‘Mom, you need to get out of the house more’. So here I am – on the road again.

That’s good news for the entertainment industry. Manchester is one of the giants in the industry and has a range of music to sing. She did Irving Berlin’s “I’ve Got My Love to Keep Me Warm” and then a complete surprise with “Be My Baby” – The Ronettes song. Loved it – it’s always nice to here music from that era. From that she gave us some Chick Correa and Kenny Loggins (Sweet Love) and from the movie The Yearling, “Kind of Man’. Especially extraordinary was “Don’t Cry Out Loud”. The whole evening played out at top speed. You leave the Theater thinking – You know what, there are happy endings on a Rainy night in San Francisco.

Special thanks to Marilyn Levinson who loves Cabaret and manages to always come up with terrific artists and performances. If you’ve never attended one of these events, then you should check it out. You could spend money on a Hot Tub and come out all wrinkly – but music is so much better.

Judy Gold will be at the Marines Theatre in the acclaimed “25 Questions For A Jewish Mother” Gold is a veteran comic. The show is written by award winning playwright Kate Moira Ryan with Judy Gold. You can find out what those questions are all about at the Marines Theater starting on March 11.

“Oleanna” is a story about a female university student who accuses her male professor of sexual harassment. This two-person play by David Mamet is controversial. But what has Mamet wrote that wasn’t? I would guess that it stirred up a hornet’s nest because it is based on the famous Anita Hill – Clarence Thomas hearings that revolved around a coke can. Linda Reid directs at the 6th Street Playhouse Studio Theatre, 52 West 6th Street, Santa Rosa (Located in historic Railroad Square. Starts March 2l. www.6thstreetplayhouse.com.
This is an American Premiere at Berkeley Rep. “Tragedy: a tragedy” is a comedy. Reporters descend on a governor with a flurry of questions. The Gov. urges calm. It’s a mournful comic tale. A savage look at all of us in the dark. The great Les Waters (The Pillowman) will direct. And if anyone can bring out all the heartache and humor of this play, it would be him. Starts on March 19. www.berkeleyrep.org.

Remember we promised Stars and fun? Well, here’s one. Billy Connolly starred with Judy Dench in “Mrs. Brown” the movie. He played her lover. Great movie – but Connolly not only acts he is a famous comic. And lucky SF, we will get to see him in his uncensored and uncut show at the Post Street Theatre starting on April 1st — April 12 only. Considered to be ‘Britain’s greatest living comedian’– he has broken box office records around the world. Billy Connolly Live! …Is the name of the show. You may also remember him from “The Last Samurai and Lemony Snicket’s – A series of unfortunate Events. Box office: 771-6900. THAT’S ‘69’ – OH, OH.

More fun…A.C.T. opens with Inspector General on March 26. Saturday March 1st at the Zeum Theater is “Orlando”. The New Conservatory opens soon with the musical play about Leopold and Loeb on April 2. …It’s called “Thrill Me”. Also at NCTC will be the spectacular Connie Champagne as Judy Garland starting in March. It should be called Judy Live!…because you won’t be able to tell the difference.