Flames In The Backyard Of Flaming Iguanas 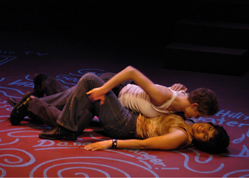 REV UP THOSE FINELY TUNED MOTORCYCLES FOR A PLAY THAT STARTS ON THE STAGE AND ENDS UP IN THE BACKYARD. This new play, based on Erika Lopez’s novel literally goes on the road. The story follows Tomato Rodriquez, a Puerto Rican biker chick (a Jersey Chick) at that who sets out to experience life on the road.

As she tells the audience, who are enthralled, or stunned at this point “I’m bi: bicoastal, biracial, and bisexual. On the road trip we are invited by “Tomato” to follow her from the main stage down some stairs to yet another theater, then through some hallways, the basement, offices and finally the backyard of the theater, where seats are placed around two gleaming bikes with their engines roaring. Gazing around you can see fire escapes. The action takes place on the dirt in the yard and is flanked by two tall apartment buildings on either side of the yard. Every once in a while you get a glimpse of the neighbors peeking through the windows at 9:30 pm to see what in the hell in going on. The audience was either too stunned – or were frozen in their seats to move. The Temp that evening was about 45 degrees. The actors were in scanty clothes. I would advise you to wear long underwear or bring a blanket.

Tomato (Mirla Reyes) crosses the country in search of the meaning of life and love. She hits hog heaven as she has sex along the way with men, woman and actually anything that moves. Her bike breaks down along the way – and she waves two Mexican Truck drivers to help fix her bike. They were ready to do that – and more. The three of them crawl under a blanket after several beers and go at it. The audience comprised of gay and straight seemed to really get into the unusual play. Especially the straight couples. I was shivering, but not the attractive girl in front of me with her boyfriend. She offered me her coat – exposing her off the shoulder top. Guess the action was heating them up.

This is not a play in the true sense of the word. It is more of a Lesbian Alice in Wonderland. Also appearing are Molly Shaiken, Libby O’Connell, Octavio Saez De Ibarra, Melissa Ososke, Jerry Metzker, Shira Burstein, and Karole Langlois. I would recommend this play as a “Voyeur” trip that should only be seen on a warm night. The brightest star on the stage was Tomato’s love interest Molly Shaiken (Hodie). Her take on Dolly Parton was brilliant. RATING: FOUR GLASSES OF CHAMPAGNE! At the New conservatory. Lee Hartgrave can also be read on Castroonline.com and Spectrum.com.

Next up at Rhino: Intimate Details by Marga Gomez. The comic takes a look at ay pride. On the 24th the new Conservatory opens with “Dirty Blonde” that played in San Fran before at Theatre On The Square”. That production left me cold – buy NCTC has a way a reviving weak plays and making them interesting. We can hope.