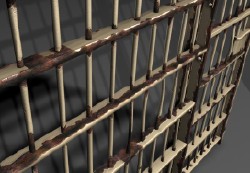 To get a handle on the damage California’s current approach to incarceration is having on its citizens, consider this: In a recent 23-year period, California erected 23 prisons — one a year, each costing roughly $100 million dollars annually to operate, with both Democratic and Republican governors occupying the statehouse — at the same time that it added just one campus to its vaunted university system, UC Merced.

Speaking at an American Civil Liberties Union meeting in Pasadena this past Tuesday, prison reform activist Gary Gilmore pointed to several root causes for California’s move away from its earlier leadership role in progressive prison management:

(1) A prison guards’ union that can and does intimidate politicians at all levels of government in California,

(2) A three-strikes law that incarcerates those convicted of even rather minor crimes for unconscionably long sentences, and

“But the real problem is a lack of political will to change an intolerable situation,” said Gilmore, who works in the Bay Area with the California Prison Moratorium Project and Californians United for a Responsible Budget. “So it’s up to us, regular citizens.”

From Top to Bottom

California’s public education system has been hard hit by the state’s preoccupation with building more prisons and locking up more people. Since the late 1970s, California has fallen from first in the nation in per-pupil spending, nearly to the bottom at number 48. With California’s annual budget falling from $103 billion three years ago to $80 billion currently during what’s often called the Great Recession, schools — including the world class University of California system — continue to face deep cuts in funding, fewer teaching positions, and a reduced ability to educate students.

Meanwhile, the prison budget and population has grown in lockstep with its expansion: “Thirty years ago, 2% of California’s budget went to prisons,” Gilmore said. “Now it’s supposed to be 9.7%, but the Department of Prisons has already overspent its budget by $1.2 billion and nobody seems to care.”

California’s prison system has gotten so far out of hand that the federal government has taken over the states prison medical system — “One prisoner per week is dying of medical neglect and mistreatment,” said Gilmore — and the entire system is under federal court order to cut the prison population by 40,000 beds. Otherwise the federal government might step in to take over the entire prison system.

The nature of the people we incarcerate bears scrutiny as well, according to Gilmore, who cited these facts:

“Half the people in California’s prisons held a job for the year before going to prison. So, if you’ve got 174,000 people in prison, that’s 87,000 people who had jobs, going to work everyday and paying taxes.”

“Over a third of prisoners are in prison for drug possession or possession of drugs with intent to sell.”

“Nationwide,70 to 90% of crimes were committed when the person was high on drugs or drunk or were trying to get drugs.”

California has a program called the Substance Abuse and Crime Prevention Act — also known as Prop 36 — which passed in 2000 and which provides drug treatment for first- and second-time nonviolent drug possession offenders, but it’s seriously underfunded.

“In any case,” said Gilmore, “it would be far better if people got drug treatment before a conviction”.

How We Got Here

In looking for culprits in California’s interrelated budget, education, and prison crisis, many observers look immediately to Prop 13, the antitax initiative California voters passed in 1978 to limit annual real estate taxes to 1% of a property’s value, along with a two-thirds legislative majority requirement to pass a budget and raise taxes.

Clearly, there’s a direct link between Prop 13 — especially the fact that commercial and industrial property that changes hands slowly is included in the antitax protections — and the widespread destruction of California’s education system. And clearly the two-thirds majority budget requirement has made a laughing stock of our state legislature, calling into question California’s ability to govern itself.

“But Prop 13 doesn’t explain everything,” Gilmore said. “Each decade after that initiative passed, California’s budget doubled—from $20 billion in the 1970s, to $40 billion in 1980s, to $80 billion in the 90s. So the State had money to build its prisons, but the local communities and school districts couldn’t build and operate their schools.”

The change had more to do with a shift in approach — you hesitate to call it a philosophy — toward incarceration. Gilmore cited this example:

“In 1978, then Governor Jerry Brown planned to tear down Folsom and San Quentin prisons, which even then were considered antiquated and inhumane, and build instead, small, therapeutic 500-bed prisons designed to rehabilitate prisoners and return them to society,” said Gilmore. “But then Republican Governor George Deukmejian took over and instead built standard 5,000-bed prisons that were quickly filled.”

And so the “build it and we’ll make them come” program began that has landed us in our current fix. Historically, California had led the nation in progressive prison management:

“In the 1950s, ’60s and ’70s, California embraced a philosophy that the state could successfully treat individual offenders through education and psychotherapy. Wardens wrote books, including the groundbreaking 1952 study “Prisoners are People,” and held advanced degrees in social work. The department’s research wing had 80 experts on staff.

California was leading the rest of the nation,” said John Irwin, a professor of criminal justice at San Francisco State University who is a living example of the rehabilitative philosophy. Before he got his degree from the University of California at Los Angeles in the late 1950s, he spent five years in Soledad Prison for armed robbery.”

“It’s political suicide to suggest that we’re going to incarcerate fewer prisoners — that’s what you always hear,” said Gilmore. “But it’s interesting to note that Ronald Reagan, when he was governor before Jerry Brown, shrank the prison system by 30%, largely through sentencing reforms. So it can be done.”

The key questions are how do you fight the entrenched interests — principally the California Correctional Peace Officers Association (CCPOA) — which hold so much sway in Sacramento.

Their members are affected by this emphasis on incarceration — both in their jobs and in their communities — and some of them, like the SEIU, are already working on prison reform.

Then there’s the question of political leadership. Who’s going to step up and advocate for dramatic prison reform when everyone thinks its political suicide to even raise the topic?

“Senator Mark Leno is good, and Shiela Kuehl was a strong advocate when she was in the Senate,” Gilmore said. “Jackie Goldberg was a real dynamo on prison reform when she was in the Assembly, too. But she got worn out when she couldn’t find enough others to follow her. So in her last couple of years in Sacramento, she turned to education reform.”

To that end, the LA Progressive plans to begin a California prison reform report card, much as other groups have them on progressive environmental or labor or immigration issues. Like them, we’ll reach out to prison reform activists across the state to help us determine which of our California Legislators are stepping up to the plate on prison reform, which are phoning it in, and which are actively pursuing the “lock ‘em up and throw away the key” approach that is harming so many Californians.

Dick Price is the Editor of LA Progressive, a progressive online daily publication based out of Los Angeles.