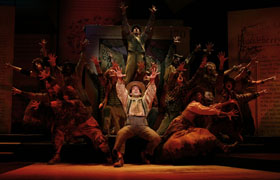 A new exhilarating revival of the Huckleberry Finn story is coming to the Curran Theater on June 14 as part of the Best of Broadway season. This time though, the musical “Big River” is giving the non-hearing community a chance to show their talents. How often, if ever, have you heard of a deaf musical making it to Broadway? “Big River” did that and Los Angeles too – garnering rave reviews along the way. This production mixes the hearing and non-hearing actors who will also perform with expressive signing along with singing. For instance Huck’s father is played by two men, one will sign and one will sing.

Once declared as “trash and suitable only for the slums,” Adventures of Huckleberry Finn” was banned by a Massachusetts Library. Of course now and then is it still one of the most read stories in the world. Adding music to the story and adventures of Huck makes perfect sense. It only adds to the masterpiece. When I first saw the musical – I found it to be thrilling, engaging. It brought the story to life in a way that I never thought possible. Now, by giving it new dimension with deaf actors – it takes on a new complex interest. See you at the Theater. I’ll be wearing one of my signature hats.

First there was New Faces of 1955. Now the Empire Plush Room is bringing us an updated look at the new faces of 2004. They have put together an amazing array of talent like Heather Macrae, Debbie De Coudreaux, Mark Brignone, Kevin Dozier, Sony Holland, Kim Kuzma & Blair Shepard. Sure to please is Kevin dozier who was named Male Performer of the Year in the San Francisco Cabaret Competition. Blair Shepard had a wonderful little tune that he wrote called “Give Me Your time” under his other name Ken Curtis. Perhaps you heard him sing it in a nightclub in Paris. Sony Holland has been compared to Peggy Lee – and that is a HUGE compliment. This undoubtedly will be great summer fun. Following New Faces will by Andrea Marcovicci on July 13. New Faces runs thru June. Take a break and luxuriate in the sensual Empire Plush Room.

Summer is bursting out all over at New Conservatory Center. “Goldfield & Koldewyn” gives us a droll evening of give and take comedy mixed with wonderful song styling for the 20’s and 30’s staring on July 10. San Francisco’s sweetheart couple takes the stage in the revue “So In Love” — the Song of Cole Porter. And who could sing Porter better than these two long-time married lovebirds. Starts July 24. Sand Francisco Idol – “Spencer Day” will take us on a personal musical journey. He will also premiere some new original compositions. Day, who was a finalist on “Star Search”, is a real crowd pleaser. He’s briskly entertaining. So, you see summer can be lots of fun – make it special – see a show, see a performer. It will lift your spirits.

To bring the summer to a crashing crescendo is the annual “Help Is On The Way X – Norhern California’s largest Annual Aids Benefit Concert. His is the 10th Anniversary of the Benefit. Each year the musical theme and and the performers change – but you can always count on it being one the most entertaining evenings in the whole universe. To paraphrase C.B. De Mille – “There are more stars at this year’s event than there are in heaven”. Look for these extraordinary talents. Lucy Lawless (Xena), Tyne Daly (A tough Cop and more recently on “Queer as Folk). Also appearing are Mary Wilson (Supreme) and Florence Henderson. Bruce Vilanch will be there from his role in Hair Spray (At the Golden Gate Theater). Will he be in drag or not? We will find out. The terrific Lucie Arnaz will also sing and skating sensation Brian Boitano will either skate or sing – I’m not sure. San Franciso favorites Jill Eikenberry & Michael Tucker will also do a wonderful little routine. Last but not least is the Carole Cook. The Broadway star will win the hearts of every one there. This is a fundraiser that provides monies to many Aids/Hiv organizations. You can help by attending. You presence provides needed help – and in return, you get an amazing evening of entertainment. You can’t beat it. So – get out and do it! The date and time.. August 2nd at The Palace of Fine Arts Theatre. I’ll be looking for you.