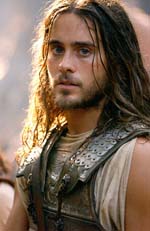 After all the hoopla surrounding the new Oliver Stone film “Alexander” – you would have thought that it was the second coming of Christ. I should have guessed that when a film gets this much press before it opens usually means that the studios publicity wheels are working overtime. In a nutshell this film is a disaster.

It starts out with an old man (Anthony Hopkins) as a wise old sage who is going to tell us the story of “Alexander The Great.” This is another bad sign. When a movie starts out with “Once Upon A Time” – look out and put tooth picks in your eyes to keep them open – cause the old guy is going to hypnotize you into thinking that his wise insights will make this film important. It doesn’t. His incessant talk just drags the movie down in depths that it can never recover from.

When the movie actually starts after 30 boring minutes listening to Hopkins, the scene opens to Angelie Jolie who is rubbing a snake all over her body. I have to admit that she is stunning – even covered with snakes. The purpose of this little snake routine is to convince he young son “Alexander” that you have to always be wary. To paraphrase – “People are like snakes. You may think they love you – but they will turn against without warning.” This film is just loaded with little daily household tips that we can all use. Not that we haven’t heard them before. Jolie is not really Royalty. She is a barbarian that Alexander’s father dragged home and then married her. There is some question whether “Alexander” – could or should descend to his fathers throne. Jolie – takes care of that by poisoning daddy and killing off his other more Royal wife and kid. Now that they are out of the way – the Crown goes to Alexander.

Here is more trouble. Colin Ferrell as Alexander is laughable. He no more looks like a great Warrior then Pee Wee Herman. And to make it even more ridiculous – Ferrell can’t act his way out of a paper bag.

The hype about the gay stuff is highly over hyped. Ferrell and Jared Leto give each other a couple of kisses – but that’s it. Not exactly the steamy sex scenes the studio promised in all the articles from around the world. The battle scenes are shrouded in dust, and suddenly Alexander comes out of the dust on his beautiful black Stallion like he was just dressed by Details Magazine. Oh yes, they do smear a little grease paint on his face to make it look dirty.

The funniest part of the movie that is not meant to be funny is the variety of accents. Some sound Scottish, some sound very, very English and in the cast of Jolie – she has concocted an accent that sounds like a Jewish woman who is trying to learn English. Victor Mature.where are you when we need you? You where the king of this kind of movie in a time when we didn’t know any better.

Alexander, the movie is a bomb. A bomb that will make money the first weekend – then the take will dry up and the word gets around. Not many people will be willing to give up three hours of their life for this badly edited pile of crappola. Oliver Stone, the Director must have been stoned to believe that this would be a great movie. So much for “Oliver The Great”. One more pix like this one and Colin Ferrell will be washing dishes at the “Outback.’ Perhaps the Studio should tie him in a chair and force him to watch this three-hour disaster. Then they should burn the print so that it could never be shown again.

RATING: NO BOXES OF POPCORN.T

Rating system. Four Boxes – Jump over Humvees to get there. Three Boxes – Don’t jump.but walk. Two boxes – It’s O.K..but you could wait to get the DVD. One Box – Has a few moments that are good. No Boxes – Run in the other direction of the theater.