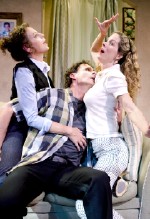 Well, at this school you would expect to see student activities for the first days of school. Those activities are: Introduce yourself … find seating chart … and do some energizers. You know, like activities that will energize you and your new friends. But in this stage play, the parents take it to a new level. Their first day of school goes like this: They introduce themselves by saying to a fellow parent. “Do you want to have Sex with me?” Instead of a seating chart, it turns out to be a bed. And for energizers – a little glass of wine or more will do the trick.

I can guarantee you lots of fun. After one roll in the hay – one of the characters says after a session. “That lasted a lot longer than our reading group!” And I might add – “Breathless.”

Two parents (husband and wife) – think they need to spice up their lives. How about this – “We could try having sex with other people.” – the wife says. When one female parent is confused about having a four way, the wife assures her: — “My Husband is an amazing multi-tasker.” And, yes he is. Not that I personally was part of it – but it might be something to think over.

One actor gives a blow-by-blow description like a sportscaster. Yes, they do sort of throw Balls around but not footballs.

And for those of you that are into it – there is also some nipple pinching. Some men apparently go wild when you do it.

This fantastically funny new comedy by Billy Aronson is really terrific. You may not actually have sex yourself – but you will be exhausted by osmosis. It’s like you did the deed along with the outrageous actors.

AND THEY ARE: ZEHRA BERKMAN (Susan), BILL ENGLISH (David), Jackson Davis (Peter), Marcia Pizzo (Kim), Stacy Ross (Alice), Torie Laher (Belinda) and Myles Landberg (Jonah). All together they are the best ensemble players I have seen this year. It’s a real winner – everyone will enjoy! “A seductive comic touchdown. And I do mean touchdown!” EXTRA: BEST ACTOR: JACKSON DAVIS, BEST ACTOR: MARCIA PIZZO. (The Lee Hartgrave Fame Award goes to both)

The fantastic directing is by Chris Smith.

The Story: Mitchell Green is a movie star who hopes to make it really big. And with the help of his agent (a real Pit Bull) he will probably make it. There is this problem however – Mitchell is having a Gay affair with a hustler. Not good for Box Office if anyone should find out.

Michaela Greeley (the agent, Diane) is the best, most devious Bitch agent that you are likely to meet. In Hollywood – even the Palm trees tremble in fear when she walks by. Even they know that she has ripped the skin right off of actors in front of a crowd. Forget “The Devil Wears Prada” – this is the real thing.

Mitchell’s problem begins when he calls up a ‘Rent Boy’. The relationship goes further than he was looking for – but he soon begins to fall in love with the handsome young man Alex (Justin DuPuis). Mitchell’s agent Diana (Greeley) flies into a rage when she finds out that this is a continuing relationship and devises a way to get the Rent Boy out of the way.

Mitchell the Star has to make a decision. He is walking a tightrope between stardom and doom. But boy is it funny to watch him try to get himself out of this fix. The hyper Agent will take over and come up with an uncanny solution. She clears the mess up as she talks to Mitchell and screams at others over the phone – barking orders. The lines are to die over. It’s a cold and forgiving world, and she is the Queen of ‘cold’. With just one word, she could demolish you. And will!

The High Rent boy gets the heave ho – but he is much richer for it. The Agent is like a cynical Lawyer who is hired to defend a young punk in a Noir movie.

You Must See This Play. The playwright Douglas Carter Beane sure has a way with words. He’s a genius writer. “Watch out – or the snap ending will give you whiplash.”

Believe me. This is the most diabolically fun evening you’ll have. It’s over the top ‘Smart-alecky’ – and that’s why I love it and the outrageous uproarious funny situations.

AT THE NCTCSF THEATER CENTER

BEST NEW MOVIE FIND has to be “Me and Orson Welles.” Richard Linklater’s coming of age feature is set in 1937 and stars teen throb Zac Efron who plays a young aspiring actor. By a fluke he lands a small role at Orson Welles Mercury Theatre Company. Welles is launching a groundbreaking version of Julius Caesar. Welles has a huge-ego and he crushes new and old actors like bugs that just get in his way. He may be brilliant, but not a very nice man. …It is a beautifully crafted and disturbing epic tale of an unforgiving incident, an unlikely love and friendship that fades away. Julius Caesar may be on the stage – but two generations of characters drift apart. LOOK FOR THE OPENING – IT’S A SPELLBINDER OF BREATHTAKING BEAUTY! RATING: FOUR BOXES OF POPCORN (highest rating) – trademarked-

O.K. ALL YOU WITCHES – THIS IS FOR YOU.
As you all know by now, the hit Musical ‘Wicked’ is still playing at the Orpheum Theatre. Now here is something that every Witch in town will want to see. I’m talking about a unique offer from the SHN Orpheum Theatre called “BEHIND THE EMERALD CURTAIN’. Here’s your chance for an exclusive Behind-the-Scenes Tour offered before Saturday Matinees Beginning Oct. 17. They are offering this rare insider’s glimpse into the world of the blockbuster Broadway musical. Cast members from the show will host this exclusive journey of WICKED, and the tour will be offered Saturdays at 10Am beginning Oct. 17. It’s a 90-minute experience. Do not bring your own brooms. Tickets go on sale on Monday, Oct. 5. MORE INFO: www.shnsf.com.

CAN YOU WRITE LIKE DAVID MAMET? A.C.T. wants to know. They have announced a David Mamet Writing Contest in conjunction of the West Cost premiere production of “November” (Mamet). A.C.T. is now accepting submissions of short original work in Mamet’s unique writing style. Deadline is Wed. Oct. 28. More details, guidelines and exact info about the contest and the readings can be found at http://www.act-sf.org/mametcontest

…Why is it that, as a culture, we are more comfortable seeing two men holding guns than holding hands? – Ernest Gaines

NEW MUSIC DIRECTOR NICOLA LUISOTTI AT THE SAN FRANCISCO OPERA HAS REALLY BROUGHT IN THE CROWDS. Free Opera events at Golden Gate Park and AT&T Ballpark had attendance of $40,000 plus. And that’s not counting the attendees at the Opera House. II Trovatore was a huge hit at AT&T Park and the Opera house. There was one little slip-up at AT&T Park. KDFC asked everyone to turn off their Cell Phones. And a little later while General Director David Gockley was at the Opera House which was also shown at the Ball Park – He said: “You know how they always tell you to turn off your cell phone. At the Ball Park you don’t have to do that.” Ooops. I don’t know about you, but for me I would rather not have them ringing during singing. Luckily, I didn’t hear anything ring. It was a superb production and a real joy to be able to relax and listen to the marvelous Arias. I can’t wait for the next AT&T outing.

Reviews coming up: Call Me Madame and The Heidi Chronicles.