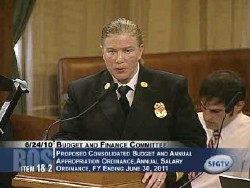 With the Board of Supervisors Budget Committee scheduled to conclude deliberations on June 30th, Fire Chief Joanne Hayes-White is back at City Hall today. It’s unusual for a department head to come back for a third Committee hearing, but enough questions remain in the Fire Department budget that members have asked for more. The NERT program is staffed by firefighters on overtime, the budget still pays for a redundant Deputy Chief of Administration (although Gary Massetani is retiring) and there are more Battalion Chiefs than necessary. The Committee will also review the Department of Children Youth & Families’ budget – with its $2 million for Newsom’s Kids2College Savings Plan (actually $257,000 – see Ed. Note at end of story), a reincarnation of the Mayor’s “baby bonds” proposal that was killed two years ago. With the scores of youth programs currently facing DCYF cuts this year, now is not the time to revive this idea – and the Budget Committee should cut it.

The Fire Department was back on the Budget Committee’s agenda on June 24th, and the Supervisors were armed with tough questions – questions that require a third hearing by the Fire Chief today. The Department plans to hire 55 new firefighters this year and keep its top-level hierarchy, but only three employees were laid off – all civilians, and all women – including Medical Leave Supervisor Margaret O’Sullivan, who had worked there for ten years. Here are the contentious issues we should expect to hear more about today:

NERT Training: Budget Analyst Harvey Rose’s report says that except for a Lieutenant who runs the NERT program, firefighter instructors get paid overtime to teach its classes. Actually, salary records show NERT Program Coordinator Erica Arteseros was paid $23,000 in overtime last year above her base salary of $115,000. The Fire Department could save $250,000 by making NERT part of a firefighter’s regular pay. One firefighter I spoke to even told me when he signed up to teach NERT classes, he thought it was going to be a volunteer gig.

But Chief Hayes-White said not paying NERT instructors overtime would “decimate” the program – and that “consistency in this training is key to its success.” At the June 21st public comment, some NERT trainees (who had clearly been told by the Fire Department that the program was being cut) spoke out against this proposal. One even brandished a photo of “Doug” their instructor, and how key the program is at preparing for when the next major earthquake hits. Of course, do they know Doug gets paid overtime to teach them?

The latter point is factually incorrect. Only two provisions in the City Charter specifically deal with the Fire Department – Section 4.108 requires a Fire Commission, and Section 4.128 talks about the Fire Chief. Section 2A.93 of the Administrative Code does talk about having 2 Deputy Chiefs – but only in the context that they serve at the pleasure of the Fire Chief. I could not find any other ordinance or Charter Provision that deals with the Deputy Chief of Administration, let alone one that requires such a position to exist.

But what was left unsaid at the June 24th hearing is that current Deputy Chief of Administration – Gary Massetani – is retiring this month. Nevertheless, that position is still in the Mayor’s Annual Salary Ordinance for Fiscal Year 2010-2011 – where his successor can continue to make a salary of $255,000. It is always politically difficult to “lay off a firefighter” – especially when the Mayor is running for statewide office. But if Massetani is retiring, now is the perfect time to eliminate that position and save money.

Battalion Chiefs: At the June 24th Committee Hearing, Chief Hayes-White said the Fire Department has 35 Battalion Chiefs. But the Mayor’s budget funds 38 – and salary records show that 38 were on the City’s payroll in 2009. Their base salaries are $160,000 – and last year, the average Battalion Chief took home over $217,548 after overtime pay. The union contract says each battalion must be staffed with a Battalion Chief at all times.

The Fire Chief said they calculate a need to staff each of the City’s nine battalions with 3.45 Chiefs (168 hours per week, divided by a 47.8-hour workweek.) But that only adds up to 31 Battalion Chiefs – not 35, and certainly not 38. In a line-by-line rebuttal to my June 21st story, a reader claimed that the Fire Department needs 40 Battalion Chiefs – due to “when a Chief must undergo specialized training, take medical leave, vacation leave, holidays.” But if so, why did Battalion Chiefs make a total of $1.195 million in overtime last year?

Proposition F – which is not legally binding, but politically risky to mess with – does list the City’s nine battalions, so consolidating the number would be hard for the Supervisors to do. But there is no reason not to reduce the number of Battalion Chiefs down to 31 or 32. Eliminating five Battalion Chiefs (keeping it at 33) would save over $1.08 million.

After publication of this article, Beyond Chron became aware that the $2 million line item which includes this program also takes into account other DCYF programs. The actual cost of this program is $257,000. Beyond Chron regrets its error.

Another agency on the Budget Committee’s agenda today is the Department of Children, Youth & Families (DCYF) – and there’s a very easy cut that the Supervisors could make: $2 million to Mayor Gavin Newsom’s “Kids2College Savings Plan,” or Baby Bonds II.

At his second inaugural address in 2008, Newsom proposed we give every newborn baby $500 – which would go into a savings account to pay for their college education, and the City would contribute more money each year. Sounds like a good idea, but there are practical questions – what happens if the kid moves out of San Francisco before they turn 18? The children likely to get the most benefit are from less mobile (i.e., more wealthy) families.

Newsom’s Baby Bonds idea didn’t get very far. In June 2008, Budget Committee Chair Jake McGoldrick killed it – because we had an awful budget deficit, and it didn’t seem like the right time to start a program where we would not see the benefits for decades.

Now, the idea is back – as the “Kids2College Savings Plan,” where a number of children in Kindergarten would get $50 or $100 this year. To address the issue of rich vs. poor kids, those on free or reduced school lunch programs would receive twice as much money. But we still would not see the benefits for decades.

And this year, we’re again in a terrible deficit. DCYF is facing a 10% cut in its budget, and 39 non-profit agencies that received grants may no longer funded. Many of these grants are only about $100,000 each – such as tutoring pre-teen Latino kids in the Mission District, and weekly meal times for homeless queer youth at the LGBT Community Center. The money spent this year on “Kids2College” could save over twenty of these organizations.

Ed. Note: The actual cost of the program is $257,000 – and this morning the Budget Committee voted 4-1 (with David Campos dissenting) to cut it. Beyond Chron regrets the initial error of erroneously reporting that it cost $2 million.