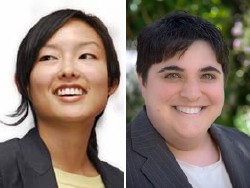 SF Ethics Commission filings for the first half of 2010 are now public, which gives us a clearer idea of who’s up and who’s down in the contested Board of Supervisors races. In District 6, Jane Kim has raised $72,000 – exceeding the combined total of her two nearest competitors. And just like Ross Mirkarimi raised a substantial sum from the Iranian-American community in his first bid for Supervisor, Kim’s donor list is replete with Chinese and Korean surnames. In District 8, Scott Wiener predictably outraised Rafael Mandelman – but the big story here is that Rebecca Prozan outraised them both with $52,000. A cursory look at the donor list also suggests that Downtown may be starting to shift its money away from Wiener and to Prozan. District 10 is relatively quiet, but Lynnette Sweet has major corporate donations – and Steven Moss took $500 from Ellis Act landlord lawyer Andrew Zacks …

Six months ago, Jane Kim reported zero donations in her run to replace termed-out Supervisor Chris Daly. With the June 30th reports in, she’s now the clear front runner at $72,000. Debra Walker raised about $38,000 for her race, but only reported $9,079 in the past six months. While she raised more for her DCCC race, the final report shows she spent all but $3,000 of that for the June election. Theresa Sparks, who was pegged early as the Downtown candidate, reported an underwhelming $29,000. Elaine Zamora’s campaign raised approximately $25,000.

So who’s giving to Jane Kim? Some names are familiar to political insiders – Board President David Chiu, School Board members Sandra Fewer & Hydra Mendoza, College Board member Chris Jackson, and ex-School Board member Mark Sanchez. You won’t find many real estate developers (only one – Art Evans – to be exact), and a few activists like Julian Davis, Rob Arnow and Richard Marquez stand out. But the vast majority of her money comes from lawyers, teachers and non-profit employees who aren’t that well known – but either have a Korean or Chinese surname. In 2004, Ross Mirkarimi raised from the Iranian-American community for his Supervisor campaign. Kim is using the same playbook.

In the race to succeed Bevan Dufty, it’s not surprising that progressive favorite Rafael Mandelman lags behind moderate Scott Wiener in fundraising. Both are members of the DCCC, and both have racked up endorsements on each side of the spectrum. Progressive candidates are always outspent, and the Mandelman campaign certainly expected to be.

Mandelman raised $19,688 in this period, for a total of about $40,000 so far. His donors include the California Teamsters, California Nurses Association, BART Board member Tom Radulovich, Supervisors Ross Mirkarimi & Chris Daly, Rent Board member Polly Marshall, non-profit and labor employees and a number of public defenders. Wiener raised another $33,000 in this period – bringing his current campaign total to $84,000.

But the bigger surprise is that moderate Rebecca Prozan outraised them both – bringing in another $52,000 for a total of $106,000. Wiener took $500 from the SF Police union PAC (the group has endorsed him), but Prozan received at least five checks of over $100 each from rank-and-file cops. Wiener still had an impressive list of donors like Russell Flynn from Flynn Investments, Rev. Cecil Williams, bankers and real estate brokers. But Prozan also took money from such moderate “usual suspects” like the Plumbers Union, Newsom aide Mike Farrah, developer Ron Kaufmann, and Pier 39 Limited Partnership.

In the 2008 race to replace District 3 Supervisor Aaron Peskin, Claudine Cheng was an early recipient of “moderate money.” But as the election got closer, many of those donors started giving to Joe Alioto –as Downtown started to re-think which candidate was viable. Are we seeing another “shift of allegiance” this time? That would appear strange, as Wiener did very well in District 8 for the DCCC elections. But the money going to Prozan should give observers pause.

With record sums of money being raised elsewhere, the race to succeed Sophie Maxwell is relatively quiet. Only three candidates – Malia Cohen, Steven Moss & Lynnette Sweet – have raised over $30,000, and progressives Chris Jackson & Eric Smith have each less than $20,000 so far. But there are interesting donors among the top three candidates.

It’s clear that Lynnette Sweet is using her BART Board connections to raise money, as a good number of her colleagues have given money. Other notable Sweet donors include LAN-PAC, a Houston-based engineering firm that has contracts with transit agencies across the country. And Lynette Sweet received seven $500 contributions from seven members of the Vidovich family – who own a conglomerate of real estate holdings in the South Bay. 49ers owner John York also gave to her campaign.

In this period, Malia Cohen reports $500 from Assemblywoman Fiona Ma – and a $400 check from her aide Bob Twomey. Steven Moss took a lot of contributions from realtors and architects. But Moss also took $500 from Andrew Zacks, the landlord attorney who is famous for doing Ellis Act evictions – on behalf of himself, and other real estate speculators. In 2008, Beyond Chron reported that a Supervisor candidate took money from Andrew Zacks – and the very same morning, the campaign called me to say he had returned it before I wrote my story. Moss, however, received Zack’s check on January 4th – and six months later has kept the money.

EDITOR’S NOTE: As a private citizen and a District 6 resident, Paul Hogarth has endorsed Jane Kim for Supervisor – and contributed $20 to her campaign. He also gave $20 to Eric Smith for Supervisor in District 10, who also writes for Beyond Chron.