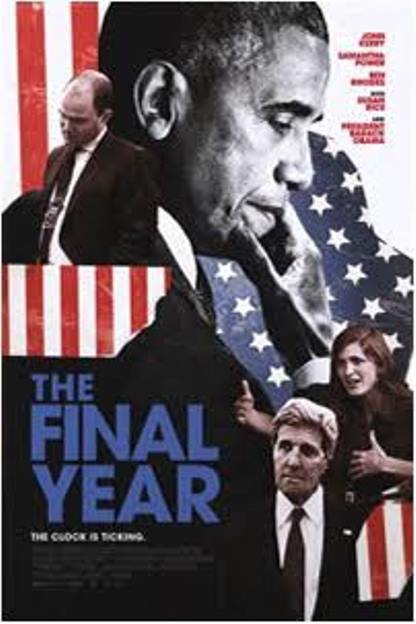 Barker’s film still comes at a welcome time.  The regime of Cheeto Benito, as Samantha Bee dubbed the White House’s current occupant, has been pronouncedly unmarked by even the semblance of concern for the 99%’s welfare.  Instead, Hair Hitler, his appointees, and his Republican enablers have shown a greater talent for finding new ways of stealing from the public till.

“The Final Year” gives viewers real examples of working for the public good.  Secretary of State John Kerry’s visit to a site of horribly melted arctic glaciers shows him as a man with his eye on long-term world problems.  United Nations Ambassador Samantha Power’s in-person visit to Nigerian and Cameroonian women whose girls were kidnapped by Boko Haram means far more to the victims than pious denunciations publicly uttered from the safety of Washington, D.C.

Barker’s film quickly establishes its general tone in its opening minutes.  Our principal subjects display some of the same problems faced by those in less exalted circles, such as getting the kids ready for school or forgetting their cell phone.  Titles recap Obama’s incredible rise from his unforgettable keynote speech at the 2004 Democratic National Convention to his precedent-shattering election as America’s first black president to his re-election in 2012 to the start of the last year of his administration.   By the end of this sequence, “The Final Year” sets itself up as a cinematic document of a historic presidential administration making a peaceful transition of power to its successor.

The central idea behind Kerry’s, Power’s, and Rhodes’ efforts is an understanding that basing American foreign policy on our dictating other countries’ actions is doomed to failure.  Far more productive results can be achieved by pursuing cooperation and finding mutual interests.  The Iran Nuclear Deal and the Paris Climate Agreement are shown to be two such positive results.

The three principals’ different personalities affect the way they individually implement their shared ideal.  Secretary of State Kerry brought optimism and a year’s worth of persistent effort to make the Iran Nuclear Deal happen.  UN Ambassador Power’s activist idealism meant firsthand observation of on the ground conditions made her a better advocate at the United Nations.  Assistant National Security Advisor Rhodes used his writing skills to translate President Obama’s ideas into pragmatic policy.

The Syrian Civil War crisis shows the shortcomings of the three principals’ approaches to foreign policy.  Power’s concern for the innocent lives lost in the Syrian conflict brings up her support for humanitarian interventionism.  Rhodes wants to prevent repeating America’s slippery slope mistakes in Iraq by blindly doing “something” like shooting a missile or two into Syria.  Kerry gambles that trusting in other players’ goodwill will bolster the long-shot odds of a negotiated but fragile temporary truce.   Needless to say, things do not end well.

Finding a right course of action in a situation with degrees of bad options provides one of “The Final Year”’s few moments of insight.  By contrast, much of the rest of the film is as insightful as an NBC Studio Tour’s portrait of Hollywood’s real day-to-day workings.

It’s hard to tell how much White House security concerns affected the film’s degree of candor.  “The Final Year” may not seem to cobble together tiny fragments of footage to create a respectable running time.  But more information about the process by which the Iran Nuclear Deal and the Paris Climate Agreement came to be could have provided the antidote to the poisonous GOP disinformation campaign regarding those two important agreements

Instead, Barker’s film gives Obama era political sausage making the white glove treatment.  Concerted Congressional GOP sabotage seems to play no role in Obama’s focus on foreign policy in his lame duck term.  Nor do the film’s principal subjects seem to take the possibility of a 2016 Republican presidential victory seriously.  Has Kerry truly forgotten that America is a nation that foolishly elected George W. Bush twice?

Making these points would not have made “The Final Year” a partisan film.  The American right-wing’s viciously hysterical partisanship would have labeled even the smallest positive comment about Obama’s presidential tenure as evidence of Barker’s alleged bias.  Barker’s apparent failure of nerve robs his film of lasting power.

One thing Barker doesn’t skimp on is showing Power and Rhodes as this documentary’s emotional heart.  Kerry appears quietly guarded and distant.  Power, in contrast to professional bully impersonating a diplomat John Bolton, turns an encouragement to check out a VR display on refugees into a moment of connection with a fellow diplomat.  Rhodes happily embraces a job that mixes being a white collar working stiff with a clear sense of doing good in the world.  The Washington press corps’ attacks on Rhodes on what comes across as his hurting their fee-fees in an interview might have spurred Rhodes to reconsider that position.

Hillary Clinton’s defeat in the 2016 U.S. presidential election tellingly throws the film’s peaceful transfer of power narrative off course, and it never truly recovers. Kerry optimistically hopes the incoming people have at least some inkling of the enormous responsibilities they’re being given.  Yet a candid shot of Obama’s oafish successor makes clear that inkling is clearly missing.  Power is left shocked after Clinton doesn’t become America’s first female president.  For a man who crafts words for his job, Rhodes is uncomfortably left speechless for several achingly long moments.

Hope in the wake of the November 2016 electoral disaster does not come from the film’s central subjects.  Kerry has no hopeful wisdom earned from losing to the equally unqualified George W. Bush.  Power and Rhodes’ determination to be politically active citizens feels like face-saving.

It’s President Obama who finally offers the film’s bright notes of hope.  His confidence for the future lies in playing the long game of seeing a generation inspired by him wanting to get involved in politics.  His other hope frames America’s progress as a series of zig-zags, with the current political situation being a terrible zag.