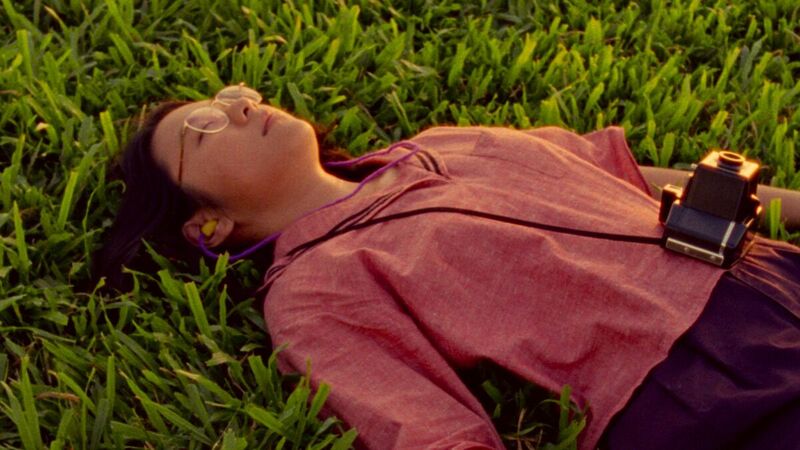 Capturing the grace and coordination of a murmuration of starlings describes Jan Van Ijken’s short film “The Art Of Flying.”   The camera catches a cloud of hundreds of starlings rising and falling in a formation resembling a dark wave with feathers.   A viewer’s mouth will gape, responding to the natural coordination and cooperation required to allow these birds to move in the same direction without crashing into one another.  Physics and lack of sufficient trained personnel make a human mimicking of a chattering of starlings highly unlikely.  But any desire to completely drink in Van Ijken’s marveling at this natural avian phenomenon is tempered by a distinct sense of repetitive image oversaturation.

Gustav Geir Bollason and Clementine Roy’s film “Carcasse” takes its central conceit from human history.  Throughout human existence, animal carcasses in whole or in part have been employed as everything from food sources to clothing material.  Could such ingenuity be applied to technology’s many bodies, the machines and other inventions which no longer function as originally intended?

“Carcasse” was filmed in Iceland, but that’s one of its few certain details.  The film’s black and white images underscore the harsh coldness of the setting’s environment.

A lack of understandable dialogue or visual signifiers unmoors the viewer.  Are the scenes Bollason and Roy captures examples of how Iceland’s present-day inhabitants survive in an intense environment?  Or are these images an imagined foretaste of the world to come should extreme climate change and fossil fuel over-dependency not be addressed?  A lack of narrative means that the viewer must seek other virtues in “Carcasse.”

The trouble is that the film’s central idea gets executed in an unimpressive manner.  There is admitted ingenuity in repurposing a plane cabin and truck wheels as, respectively, a sheep pen and grinding stones.  But the repurposing needs to create a plausible substitute, which is not what one sees in this film.  A detached fuselage may provide some shelter from the cold, but the interior setup doesn’t appear to generate sufficient heat to keep the sheep from freezing to death.  Truck wheels may be round like grinding stones, but the surfaces of truck wheels are more recessed and uneven than the flat surfaces grinding stones need.

“Carcasse” can be read as an indirect criticism of the planned obsolescence mentality underlying capitalist technology.  The repurposed technology’s existence shows that even now “useless” technology can still play a useful part in human survival.  Yet the often excruciating detail of daily life presented in the film lacks the necessary taint of the strange or unexpected that would excite the mind.

A centenary re-enactment of a notorious strike-crushing incident reawakens old political antagonisms in Robert Greene’s documentary hybrid “Bisbee ’17.”   The Deportation refers to the World War One-era crushing of a 1917 Bisbee, Arizona strike against atrocious working conditions in the mines.  A hundred years since the incident, a public re-enactment allows various Bisbee residents to face the event’s ugly legacy.  Greene’s fascinatingly immersive camera captures everything from event preparation to nostalgia for mining company paternalism.

Sandi Tan’s delightfully entertaining personal documentary “Shirkers” is the less extreme cinematic equivalent of a Whizzo Chocolate Company offering.   A Crunchy Frog may not be found beneath the film’s sweet nostalgic exterior of teen friendship in Singapore.  But there are exploding cats, a teenage assassin, Wim Wenders theft, and a couple of interconnected mysteries.

Singapore in the late 1980s and early 1990s may have made socially acceptable behavior a civic virtue.  But culture-wise, the country could charitably be called a film wasteland.   The country lacked a film industry to speak of.   Tan, who grew up in this environment, decided to correct this situation by filming what she hoped would be Singapore’s first indie film “Shirkers.”

In the summer of 1992, “Shirkers” was made with best friends Jasmine Ng handling script and Sophia Siddique covering production duties.  Camera work was handled by the three girls’ filmmaking mentor Georges Cardona.  Tan took the film’s lead role of a teenaged assassin.  A feverish two-month summer shoot ended with completion of filming.  The problem came when Cardona disappeared with all the film footage.  “Shirkers” the documentary answers what happened to the “Shirkers” DIY film footage and tries to unravel Cardona’s backstory

Making and starring in a feature film despite youth and lack of filmmaking experience wasn’t that much of a stretch for the teenaged Tan.  She and Jasmine, the self-styled Coen Sisters, did everything from creating the Exploding Cat ‘zine to getting bootleg VHS copies of American indie films.   As candid interviews with Tan’s friends reveal, Tan’s taking the lead role in “Shirkers” seemed a product of her being particularly full of herself.

Overconfident egotism and Tan’s relationship with Cardona explain why the director didn’t suspect earlier that her mentor was sketchy.  Her recollections paint Cardona as the first adult in Singapore who both understood and encouraged her.  Excerpts from Cardona’s audio messages to Tan characterize him as a sort of hippie-ish mentor.  But it’s when Tan starts looking into Cardona’s life before he met her and afterwards that the viewer realizes the former mentor is a lot less saintly than he appeared.

Yet “Shirkers” avoids being a personal story of betrayal and disillusionment.  The 1992 “Shirkers” footage proves a cinematic time capsule of a Singapore that has been lost to architectural and social change.  The non-actors who took part in that DIY film don’t regret their participation in the project.  Forging ahead and making a feature film without awareness of the difficulties of doing so demonstrates a wonderful display of reckless courage.

The reappearance of the 1992 “Shirkers” footage doesn’t mean a lost cinematic treasure is rediscovered.  From what Tan tells the viewer about the film’s making, Cardona’s disappearing with the film may very well have been the best fate for all involved.

“Shirkers” the 2018 documentary, on the other hand, is a magnificent jewel.  It’s a youthful reminiscence, a remembrance of a Singapore past, a tribute to DIY culture, and a cinematic inquiry, among other things.  But Tan’s documentary’s most important label will be “one of 2018’s best films.”

How does one live on a land still under history’s shadow?  Hale County’s name came from that of a Confederate general.  The poor rural white inhabitants of this Alabama county were the subjects of James Agee and Walker Evans’ classic work “Let Us Now Praise Famous Men.”  Martin Luther King Jr. visited the county two weeks before his assassination.

RaMell Ross’ debut documentary “Hale County This Morning, This Evening” answers that question by capturing the small moments that come with living and being alive and finding the emotional connections among them.   This might sound like a standard artistic approach.  What gives Ross’ film a unique slant is that this approach is applied to a poor majority black community in the heart of the South’s Black Belt.

What makes Ross’ film unique and also hard for the average non-black moviegoer to understand is its conscious rejecting of the usual fictional stories assigned to blacks.  Excepting racists who’ve found a natural home in the Republican Party, it’s doubtful the clips from Bert Williams’ blackface film “Lime Kiln Club Field Day” would be a source of audience amusement.  But Ross also rejects the idea that black lives are only interesting when they’re struggling with large social issues such as racial prejudice and police brutality.

“Hale County This Morning, This Evening” stakes a what-shouldn’t-be revolutionary claim that mundane beauty exists in the lives of black folk.  Whether it’s the eeriness of a dark rural highway or the joys of just hanging out with friends, Ross’ photographer’s eye catches what makes these small moments meaningful to the people who live them.

The gleaning of these images came over a five year period.  But the dynamic that allowed those images to be captured on film was not that of outside visitor coming in to gather pretty stones and leave.  Ross consciously rejects that dynamic to the point of openly ridiculing it.  A mock Old English title card describes a pregnant mother’s refusal to allow Ross’ camera further access.

As revealed in interviews, the filmmaker became a part of the community by teaching GED classes and coaching basketball.  It was through that work that he met his subjects Quincy Bryant and Daniel Collins.  That trust between filmmaker and subject pays off particularly well in a wrenching sequence where Quincy’s wife Boosie graphically gives birth to twins before losing one child to SIDS.

Those looking for familiar structure in Ross’ film will wind up being restless at best and bored at worst.  The closest the film comes to stereotypical film structure is the sense from the title that the assembled moments add up to a prototypical day in the life of Quincy, Daniel, and their friends and family.

Instead, Ross’ film relies on associative editing to link its images together.  As an example, there’s a sequence where Daniel practices his shots at basketball so intently that drops of his sweat fall on the gym floor.  A few scenes later, there’s a shot of raindrops falling on the ground prior to a storm.

A consequence of the editing process for Ross’ film is that viewers unprepared to actively make these aesthetic connections will have difficulty seeing the greater whole Ross is trying to convey.  Individual moments of beauty can be noted, such as a couple of shots of the underside of a basketball hoop framed against the night sky.  But an extended sequence of Quincy’s son Kyrie drawing on a seemingly inexhaustible well of energy to run back and forth across his parents’ living room seems puzzling when viewed by itself.

“Hale County This Morning, This Evening” is not a film designed for easy aesthetic comprehension.  It honestly asks viewers to open their minds and their hearts to lives they might otherwise remain ignorant of.  Not everyone will be able to make this effort.

(“Carcasse” is now available to SFFILM members via streaming at its online screening room (www.sffilm.org ). “Shirkers” will be released by Netflix sometime in Fall 2018.  The Cinema Guild has obtained U.S. distribution rights to “Hale County This Morning, This Evening.”)