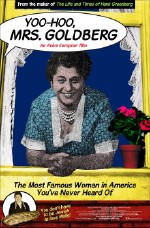 Comedian Gertrude Berg died long before the birthers polluted the public discourse. But those deniers of President Obama’s citizenship stood for the same “American citizenship as private club” mentality as the American anti-Semites of Berg’s time. The Goldbergs, the long-running radio and television comedy created by Berg, provided an entertaining counter-definition of American citizenship as both an affirmation of individual identity and a sharing of common stories and struggles of surviving in America.

Kempner shows that Gertrude Berg’s success seemed an inversion of her unpromising beginnings as Tillie Edelstein. Her father, Jake Edelstein, tried various enterprises such as a Catskills resort without long-term success. Berg’s success with The Goldbergs led to her founding a media empire which included a personally written “Mama Talks” advice column and a clothing line. Her mother remained severely and permanently depressed following the death of Tillie Edelstein’s older brother. The fictional Goldberg family had no dead immediate relatives, and was headed by the warm and generous Molly Goldberg.

But the documentarian also shows that Berg never built her success on rejecting her past. From working in her father’s Catskills resort, Tillie Edelstein learned the skills needed to run a business and got an unexpected workshop to hone her writing and staging skills. The comedian came up with part of her fictional family’s name by utilizing her mother’s maiden name.

Kempner’s portrait depicts Berg’s eventual success as a combination of those traditional elements of hard work and luck. Tillie Edelstein’s adoption of the name Gertrude Berg marked a determination to make a professional career out of writing and acting. Berg’s identification with the role of Molly Goldberg began as an accident. Her original plans to play the role temporarily ended when audience outcry over Berg’s absence for a week convinced CBS executives that The Goldbergs was a hit. The comedian would consequently play the beloved Jewish mother on radio, television, and even film from 1929 to 1956.

Why did The Goldbergs achieve such popularity? Did anti-Semitic viewers see the show as an opportunity to indulge in mocking Jews? Molly Goldberg’s accented English malapropisms certainly underscored her outsider status compared to the so-called American mainstream.

Kempner answers these questions by comparing The Goldbergs to the more popular “Amos ‘n’ Andy.” The titular characters of the latter show may have been black men. But the actors playing them were white men with Southern accents. Nor is evidence offered that the show’s portrayals of black American behavior were accurate. Berg, by contrast, insisted on having Yiddish-speaking actors playing her fictional family members. Inspirations for The Goldbergs’ stories came from Berg’s frequent visits to New York’s Jewish ghettos, where she looked for interesting bits of behavior that she could note for story kernels.

The result was a level of honesty and emotional authenticity that resonated with a wide spectrum of listeners. As CBS anchor Andrea Roane put it, “it was something being from a black family. You didn’t think about religion or even ethnicity listening to Gertrude Berg, the Molly Goldberg show, all you thought about was family.” Fan Chris Doweny noted the Goldbergs were more like his Greek family.

The Goldbergs’ viewer popularity was matched by Berg’s professional success and her setting of pop cultural milestones. The Goldbergs became television’s first character driven situation comedy. Berg received the first Best Actress Emmy. The comedian also introduced the concept of product placement, but that cinematic irritant shouldn’t be permanently held against her.

Despite Berg’s hardest efforts, Senator Joseph Mc Carthy and the Hollywood Blacklist ultimately proved far stronger than her. Philip Loeb (husband Jake Goldberg)’s career and ultimately his life could not be saved once his union activity led to accusations of communism.

Berg continued working in theater and television up to her death in 1966. Yet ironically, Berg and her achievements are largely forgotten today. “I Love Lucy,” The Goldbergs’ replacement, was recently honored in the US Postal Service’s stamp series of early TV shows … But Berg’s creation was not among the chosen. Even the current head of CBS, the network where Berg was a major star, had never heard of Berg.

Kempner makes a case that Berg and her creation didn’t deserve the oblivion of cultural amnesia. The clips of Berg’s Molly Goldberg show a woman whose very fiber radiated love and generosity. The show, for all its technical limitations, captured such core realities of tenement life as lack of privacy and finding ways to get along with one’s neighbors in such an environment. Yet it ultimately went beyond genre optimism to find real optimism in making it through tough times. NPR’s Susan Stamberg tells onscreen the apocryphal tale of President Franklin Delano Roosevelt feeling that The Goldbergs mattered more in helping Americans weather the Great Depression.

Yet did The Goldbergs’ accurate depiction of its milieu also contained the seeds of its own destruction? Americans’ national mood in the 1950s seemed geared more towards putting the hardships of the past decades behind them. A fictional family acclimated to seemingly eternal struggle could not survive transplanting to an environment where their struggle became irrelevant.

Was it a coincidence that the Goldbergs’ relocation to the suburbs presaged the series’ eventual cancellation? Then again, even if Berg’s show survived past 1956, the social upheavals of the 1960s would probably doom the show to irrelevance.