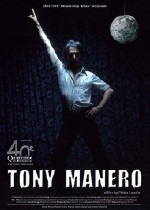 On the heels of the 35th anniversary of Pinochet’s coup came the San Francisco Film Society Screen’s newest offering. Pablo Larrain’s “Tony Manero” discusses neither the history of the coup nor the American government’s involvement in fomenting the overthrow. In fact, the director has admitted in a TwitchFilm interview that a thorough knowledge of 1978 Chilean politics is not necessary to enter the film’s world. Yet “Tony Manero” subtly raises disconcerting questions regarding the harmful consequences of emulating American pop culture.

Larrain’s film is set five years after Pinochet’s coup. Dancer Raul Peralta (Alfredo Castro) aspires to be publicly recognized as Chile’s Tony Manero on a national impersonation show. That aspiration extends beyond the contest to an ongoing worship of John Travolta’s “Saturday Night Fever” hero. One of Raul’s projects is re-creating the Travolta film’s glass brick floor in a ratty bar.

However, “Tony Manero” strays far from the formulaic liberatory “following one’s dream” film churned out by Hollywood like Mc Donald’s burgers. Raul clearly does not use his obsession to liberate himself even mentally from Pinochet’s oppression. Instead, Larrain subtly mocks the supposed universality of the pursuit of one’s dreams. “Saturday Night Fever”’s Tony Manero may proffer illusions of romance and transcendent sexual power. Yet that power resembles a hothouse flower which only flourishes in a very controlled environment. The image of Raul in his Manero white suit walking along Santiago’s dirty rooftops is less a demonstration of sexual prowess and more a display of cultural deconstruction.

That image also illustrates the ambivalent dynamic surrounding the introduction of outside ideas to an existing culture. Foreign ideas may provide a fresh perspective that forces re-evaluation of the existing culture’s assumptions. Yet what happens when those outside ideas are based on assumptions that can’t be replicated in the receiving culture? That’s the question “Tony Manero” wrestles with.

Raul’s identification with Travolta’s character does demonstrate a wholesale embrace of an American image. Yet his attempts to replicate “Saturday Night Fever”’s world in Santiago sidesteps or ignores the American film’s social infrastructure. Obtaining the dance floor bricks may be a matter of criminal ingenuity. But the syncopated lighting system that brings such a dance floor to life remains impossibly outside the pathetic resources of bar owner Wilma’s facilities. Raul’s desire to embody the fictional American’s sexual potency overlooks the very pronounced age difference between the Chilean and his idol.

Why is Raul obsessed with the Tony Manero character? Larrain provides suggestions rather than explanations. The aspiring dancer’s involuntarily spartan apartment hints at an economically unbearable existence. 1978 Chile’s overt military and police repression certainly makes at least a mental escape from that country worthwhile. But the closest the audience comes to understanding Raul occurs during a screening of “Saturday Night Fever.” His facial expression during the film screening resembles religious revelation more than entertainment.

“Tony Manero”’s visual style suggests a world as seen through a surveillance camera or at least a cultural anthropologist’s lens. Raul’s actions are clinically observed through Larrain’s lens. But his motivations need to be supplied by the viewer. It’s ironic that in the one part of Raul’s life where an outside observer can’t spy on him, this particular member of the Chilean underclass seems to lack an inner life of freedom.

Having a revelatory monologue or a statement from someone who knows Raul’s past would work against Larrain’s aesthetic. Raul clearly doesn’t come across as being one of those cliched “nice guy mistakenly making bad choices.” His shocking method for removing fellow competitor Goyo from the Tony Manero contest demonstrates he’s acting with definitely deliberate aims. Yet he doesn’t recognize the pettiness of his ultimate goal. His desire for momentary public recognition on a national celebrity impersonation show transforms his character from an ambitious monster to hypnotically pathetic creature.

Actor Alfredo Castro faced difficult acting challenges in playing Raul. The viewer had to believe that Raul’s pronounced age difference between him and his favorite character didn’t matter or could be overcome. In lesser hands, this would have provided moments of low comedy. Castro also used uninspired or banal dance moves to illustrate the gap between the Chilean’s ambitions and his actual abilities. He does succeed in inspiring viewers into trying to puzzle out Raul’s semi-blank slate character.

Trying to take on the role of Tony Manero does awaken in Raul aspects of his character buried by poverty and other limitations. His unlikely sex appeal becomes plausible. Yet any physical appeal Raul has seems eclipsed by a seeming gift for being a projection screen for the secret desires of the women in his life.

American films made in Hollywood tend to be considered part of what’s called American soft power. Such films present ultimately positive portraits of the American way of life. Yet this bit of cultural PR puffery can have negative consequences. During the Chilean music dance sequence, the viewer notices Raul displays very little emotional interest for his country’s native music. It’s nice that the Chilean likes Bee Gees music. But he seems to exist in a cultural limbo where he’s alienated from his home culture yet it’s impossible for him to cross over into his dream foreign culture.

Larrain’s film definitely doesn’t take either the American government or American pop culture to task. But “Tony Manero”’s disturbing portrait of life in Pinochet’s Chile offers a sense of unacknowledged American responsibility for creating the conditions that allow Raul to run roughshod over his fellow Chileans.