Film Review — “Phil Ochs: There But For Fortune” 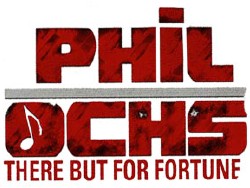 Phil Ochs came of political age as America slowly emerged from the Eisenhower years’ repressions. An apolitical journalism student, Ochs befriended student leftist and folk music enthusiast Jim Glover. Thanks to Glover, the future singer/songwriter would be inspired by exposure to Woody Guthrie and The Weavers to start writing politically charged folk songs.

Within a year of joining the Greenwich Village folk music scene, Ochs’ passionate songs on war and civil rights earned him a growing fan base. Any political rally for a cause Ochs believed in would generally be graced by an Ochs performance on request. Yet widespread popular success continually eluded the singer/songwriter’s grasp. That continual frustration combined with the darker turn America took from 1968 on ignited a downward emotional spiral that would ultimately lead to Ochs’ tragic end.

Bowser obviously frames Ochs’ story against the political changes hitting America in the 1960s and early 1970s. Period news footage is used throughout to ground the viewer in the politics of that decade and a half. From Kennedy’s inauguration to Nixon’s warning of enemies within the borders of the US, it’s all here. The director’s approach is understandable as such songs as “I Ain’t Marching Anymore” were crafted in reaction to the injustices existing in American society. In matching Ochs’ successes and failures against the decade’s changing political climate, the film portrays Ochs as the musical spirit of the 1960s left.

It’s ironic that Ochs craved Elvis Presley‑levels of musical success. Interviews with Jac Holzman and other record company executives reveal that they recognized Ochs’ talent. Yet one senses their implication that, commercially, Ochs would never be more than a midlist artist to them. Despite the folk troubadour’s willingness to work with the record company to promote himself, customers who hated Ochs’ political stances would have probably proven unlikely to spend money on his records. The type of music that topped the record charts didn’t publicly criticize forced Christian conversion of “heathen” communities or racism in Mississippi.

That lack of commercial intuition also plagued Ochs’ attempts to broaden his audience. Instead of following his contemporaries’ commercially successful evolution from folk to folk‑rock, the political singer/songwriter experimented with classical symphonic backdrops. Needless to say, these efforts satisfied neither more conservative listeners nor Ochs’ existing fans.

But if Ochs never received his commercial due from the record‑buying public, the admirers and contemporaries who are interviewed speak to both the enormity of his talent and his personality. This list includes such names as Sean Penn, Tom Hayden, Christopher Hitchens, Pete Seeger and Joan Baez.

One notable absence among the interviewees is Bob Dylan. Ochs admired him to the point of placing his own talent second to the man he felt was the best songwriter of the age. Yet that admiration had its self‑destructive side. Dylan was frequently critical of Ochs’ obsession with politics, and often belittled his work. Instead of defending his work, the protest singer sadly was willing to endure the more famous songwriter/singer’s abuse. So perhaps Dylan’s absence is not surprising.

Hearing Ochs perform his songs, one realizes that Dylan was unfairly dismissive of Ochs’ work. The circumstances that led to such tunes as “There But For Fortune,” “Love Me I’m A Liberal,” and “Here’s To The Great State Of Mississippi” may be the distant memories of decades past. Yet the human failings of racism and tolerance of injustice that Ochs sang about are unfortunately timeless. Vintage footage of Ochs’ performances of these songs shows the singer/songwriter is never less than riveting, as he displays an affable cocksureness and confidence.

Also impressive is the range of Ochs memorabilia seen in the film. There are old lyric sheets, yellowed press clippings, and rare home movies. Footage of performances on now forgotten television shows or nightclubs pepper the documentary.

The personal anecdotes are a nice mix of optimism and despair. Stories of life in 1960s New York City’s Greenwich Village show why it was a hipster magnet. Ochs’ trip to Chile, shortly after Salvador Allende came to power, is especially poignant because of Ochs’ encounter with famed Chilean political folksinger Victor Jara and what happened to Jara after September 11, 1973.

That trip to Chile could be called a last resuscitation of Ochs’ old optimism regarding people power. The American political disasters of 1968, from the Martin Luther King assassination to the election of Richard Nixon, had dissuaded Ochs that his music could make a difference in people’s lives. The aforementioned lack of commercial success also didn’t help.

Did the uncompromising nature that made Ochs an effective musical activist also prove to be the source of his failures? Interviewee Billy Bragg thinks so, and it’s hard to disagree. Though Ochs didn’t follow the Weather Underground’s path of bombing buildings, his alliance with the Yippies equally failed to bear long‑term political fruit.

Ochs’ own toxic family background certainly contributed to the tragic turn his life eventually took. His father also suffered from manic‑depression, but unlike Ochs was hospitalized for it. His mother frequently criticized his father for his own lack of professional success.

Yet when the film charts Ochs’ descent into alcoholism and near‑madness, the film is oddly reticent. There aren’t any accounts of the strains placed on Ochs’ marriage or friendships except in the most general of terms. One suspects the high regard Ochs still commands among the interviewees prompted them to not speak ill of the dead.

If “Phil Ochs — There But For Fortune” does not achieve greatness, at least it returns relevance to an artist whose best truths
still remain relevant.