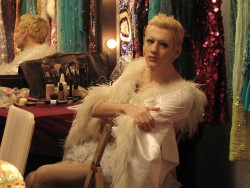 Quite a few San Franciscans’ introduction to the music of Svika Pick occurred over a decade ago through the good graces of Israeli director Eytan Fox. During one of the S.F. Jewish Film Festival screenings of his amazing TV series “Florentine” at the Castro Theatre, Fox had brought along the video of Dana International’s performance of the Pick-scribed tune “Diva.” The transgender singer’s delivery and the song’s wonderful beat overcame monolingual audience members’ ignorance of Hebrew. Needless to say, by the video’s end the Castro audience saw why “Diva” won that year’s Eurovision Song Contest. Pick, on the other hand, has remained a generally unknown name to San Francisco audiences. Ironically, he’s a beloved Rod Stewart-level star in Israel.

San Franciscans’ state of ignorance will no longer apply with the upcoming Castro Theatre screening of “Mary Lou.” This musical comedy/drama Israeli TV mini-series introduces viewers to over twenty of Pick’s songs in the course of its 2 ½ hour running time. Scriptwriter Shiri Artzi is best known to American audiences for creating the original version of the TV psychiatry series “In Treatment.” Finally bringing things full circle, “Mary Lou”’s director is Eytan Fox.

Beautiful Miriam Levi (Maya Dagan) mysteriously abandons her husband David (Shmuel Vilozni) and son Meir (Amit Morris) on the boy’s tenth birthday. Among the things she leaves behind for her child is a love of Svika Pick’s music.

While David no longer speaks of the absent Miriam, Meir believes she’s left their rural Israeli town to pursue her dream of singing with Pick. Life for the lonely Meir is made bearable by his inseparable friendship with fatherless Shuli.

But in the last year of high school, Meir (Ido Rosenberg) and Shuli (Dana Frider) form an unexpected love triangle with the arrival of handsome new student Gabi (Alon Levi). While Shuli and Gabi becomes a couple, out student Meir can only futilely lust after the basketball team captain. By school year’s end, Meir is forced to leave town for Tel Aviv.

At an “American Idol”-style tryout, a chance encounter with Uri (Yedidia Vita) eventually leads Meir to joining Uri’s drag troupe The Holy Wigs. As Meir’s role in the troupe changes from costumer to performer, his search for his mother eventually leads the young man to find himself.

The jukebox musical has in recent years become one of musical theatre’s annoying genres. Unlike a musical revue of a particular songwriter (e.g. Jacques Brel), this genre attempts to bring theatrical life to a medley of popular hit songs (e.g. classic 1980s rock hits in “Rock of Ages”) via plots that possess less life force than one of “The Walking Dead.”

Fox’s “Mary Lou” overcomes the jukebox musical’s limitations with more than just American unfamiliarity with Pick’s songs. The film skillfully uses Pick’s tunes as ways of fleshing out his characters’ feelings and relationships.

For Meir, Pick’s music provides his most tangible bond with his absent mother. The young man’s singing of Pick’s songs conveys both his hopes that his mother’s dreams came true and the love that he knows she would give him were she present. Then again, when Meir performs “Love in the End of the Summer,” darker emotions such as jealousy are clearly at play here.

“Mary Lou”’s more serious plot elements, such as homophobia and death, also lifts the film out of the disposable entertainment niche. Instead of aspiring to just spur dancing in the aisles, its portrait of modern day Israel reminds viewers that the country is far from “the Middle East’s Provincetown” portrayed in the Castro area public relations campaign.

An encounter between the starstruck young Levi and Pick never degenerates into the unfortunately familiar squirm-inducing meeting between a celebrity and their “Number One Fan.”

Traditional monolingual English-speaking musical fans may feel reading “Mary Lou”’s subtitles prevent them from immersing themselves in the mix of song and onscreen action. Also, the film’s lack of a choreographer translates to an absence of visual transcendence in its dance numbers.

For those who can deal with Bollywood musicals or opera supertitles, the subtitle use should not be a problem. To be fair to Fox, a visual grace is brought to a song Shuli performs in the confines of a kitchen. If Meir’s first on-stage performance may lack the confident exuberance of Pick’s song, a quartet of well-toned bare-chested male dancers in silver short-shorts provides Castro-level visual eye candy.

“Mary Lou”’s other strengths are the fine performances elicited from the cast. Dagan’s Miriam becomes both muse and chimera to Meir. Frider dispels fag hag stereotypes by making her character genuinely loyal to Meir and dissatisfied with males solely interested in getting her clothes off. The openly gay Levi displays both angelic beauty and devilishly repressed sexuality.

The real-life Israeli entertainers who appear in the film never come across as stunt performers. Pick resembles a mature Ozzy Osbourne, and his scene doesn’t coast on his star power. The Holy Wigs are real-life drag performers. However, aside from Yuval Edelman’s Ziona Patriot, the other actual members of the Holy Wigs lack major speaking parts.

“Mary Lou” displays more fantasy and less danceable numbers than recent Frameline selection “Leave It on the Floor.” On the other hand, Fox’s film does provide the time needed to allow its characters’ dramatic growth to be shown.

While the Israeli film will not always have viewers clamoring for its soundtrack album, one will see why Fox’s film deserved its award as Best Television Miniseries of 2010.

(“Mary Lou” screens at the Castro Theatre (429 Castro, SF) from September 17-21, 2011. See www.castrotheatre.com for information on showtimes and ticket prices.)