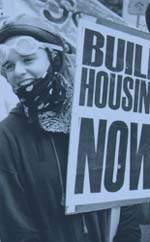 Bush homeless czar Phil Mangano came to San Francisco yesterday to announce with Mayor Newsom that the City will receive $18.8 million in federal aid to end chronic homelessness – a $1.6 million increase over last year. But advocates point out that it’s only a $2 million increase over what the City got in 2003 – and that meanwhile the federal government has made drastic cuts in public housing that will drive many more families into homelessness.

As the Bush Administration declares war on low-income housing, San Francisco has advanced solutions to homelessness with local funds. Care Not Cash is the most prominent example, but now the city has finally achieved tangible results through the Surplus Property Ordinance. This week, the effort to develop 150 Otis Street into housing for homeless seniors passed a critical milestone that will create over 100 units of housing. And yesterday, the Board of Supervisors Budget Committee voted to allocate the proceeds from the sale of City property to homeless and low-income housing. This won’t come close to filling the gap in federal cuts, but it does show that the City is advancing solutions.

“How dare the Bush Administration come to San Francisco to praise themselves for funding homeless assistance when they continue to decimate funding for affordable housing,” said Paul Boden, executive director of the Western Regional Advocacy Project. Last year, the federal government cut $700 million in the operating budget for public housing. George Bush’s proposed budget for 2008 calls for another cut of $400 million – and a whopping $736 million cut to Community Development Block Grants.

The Bush budget cuts are not only drastic – they go after the most needy of poor people. $112 million of the cuts are from housing programs for disabled people, $160 million from housing programs for elderly people, and $415 million from public housing capital expense funds – despite a more than $20 BILLION backlog in necessary expenses. San Francisco’s $2 million increase in McKinney-Vento funds for supportive housing might house a few people, but it pales in comparison to the cuts that the federal government has pushed at the same time.

“Monetarily, it makes no sense,” said Sara Shortt of the Housing Rights Committee and a frequent contributor to Beyond Chron. “Homeless services are far more costly than just providing units – but these cuts will take away housing for thousands of low-income tenants. They just want to put resources into band-aids, while taking away the cure.”

Like in other cities, Mayor Newsom has a Ten Year Plan to end chronic homelessness in San Francisco. But a recent report by the Center on Budget and Policy Priorities shows that cuts in federal housing assistance have undermined local plans to end homelessness. While HUD sends out press releases that tout its assistance to local communities, the public housing cuts make it virtually impossible to make any substantive progress. For example, while the City of Chattanooga, Tennessee has received rental assistance from the federal government for 135 units of supportive housing, its Housing Authority has lost more than 650 federally funded housing vouchers since 2004.

This leaves local communities hanging dry, and puts a sour taste in the mouth of housing activists who struggle with the devastating cuts by the Bush Administration. “They don’t hold a press conference when they’re cutting $700 million from the HUD budget,” said Boden. “But then they put on a dog-and-pony show when they add $2 million to homeless services for San Francisco. It’s unadulterated bullshit.”

With the Bush Administration abdicating its responsibility, San Francisco has taken steps to create more housing through the Surplus Property Ordinance. Sponsored by Supervisor Chris Daly, the Ordinance makes it City policy that all “surplus property” owned by the City must be used to house homeless people. Either the City must develop the property, or else sell it and use the proceeds for low-income housing. A Citizens Advisory Committee was established in 2004 to oversee its implementation, and work closely with the Mayor’s Office of Housing (MOH) on evaluating each property.

This week, two developments occurred that will help accomplish what the Surplus Property Ordinance was originally designed to do. After years of frustration, one property (150 Otis Street) will finally be developed, and the other (Alemany and Ocean) will be sold and the proceeds go towards affordable housing. Before this, only one property (Washington and Sansome) has been developed, and no properties have been sold.

Housing advocates have urged the City for years to develop 150 Otis Street
– an empty office building that could provide over 100 units for homeless seniors. Despite unanimous support from the Citizens’ Advisory Committee, MOH insisted that it would be more practical to sell the property because the costs of developing it would be “too steep.”

The Mayor’s Office brought in a structural engineer last week to look at the building, and was pleasantly surprised to learn that it is very sound. While the next step is to develop the property, it looks like over 100 homeless people will finally be able to get a newly renovated studio unit at 150 Otis Street. After years of struggling to make it affordable housing, the dream will finally become a reality.

At the February 14th Budget Committee, the Board of Supervisors voted to approve the sale of another piece of surplus property – the vacant lot at Alemany and Ocean – to a private developer who paid above-market value ($850,000) for it. At yesterday’s meeting, the Supervisors voted to appropriate the $850,000 for “homeless and low-income housing.” While some Supervisors had previously tried to divert the funds to other projects, money was found in the City’s “rainy day” capital fund to pay for those initiatives.

Amazingly, this is the first time since the Surplus Property Ordinance passed in 2002 that the City will realize revenue from selling surplus property. The City got more than its market value on selling a piece of land, and that money will go to the Mayor’s Office of Housing. While it is not certain what the $850,000 will be used for, Housing Development Director Joel Lipsky told me that it will likely go to assist planning for 150 Otis Street. Although it will cost more than that to develop 150 Otis Street, last year the City allocated $4.5 million (which has not been spent) for the construction, acquisition or rehabilitation of affordable housing.

At a time when the Bush Administration drastically cuts funding for affordable housing that drives people out on the streets, San Francisco’s Surplus Property Ordinance is a small but necessary step to mitigate the damage. This week, we saw one property move ahead to develop affordable housing – and another get sold and the proceeds used to develop housing for homeless people. Once again, the City of St. Francis has shown the rest of the nation what “San Francisco Values” are all about.