Federal Gay Rights Bill: All of Us or None of Us 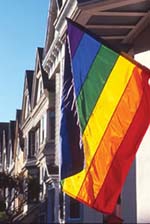 “All of us or none of us.” That about sums up my feelings about the controversy over the exclusion of transgenders from the Congressional gay rights bill that would protect queers from discrimination in employment.

Last week, U.S. Representative Barney Frank (D-MA) pushed to delete transgender folks from the legislation. A hearing on the bill was scheduled in Congress yesterday. That hearing was postponed for two weeks, after protests were staged by transgender activists across the country. Here in San Francisco, protesters held a 24-hour vigil outside House Speaker Nancy Pelosi’s office to urge her to stick with the original bill.

At this point, most queer organizations, even the more conservative Human Rights Campaign, have withdrawn support for a bill that does not include transgenders. It’s uncertain what Frank will do now.

In a four-page statement issued last week, the out gay Frank said that the inclusion of “gender identity” would kill the bill. “The question facing us–the LGBT community and the tens of millions of others who are active supporters of our fight against prejudice,” Frank wrote, “is whether we should pass up the chance to adopt a very good bill because it has one major gap.”

A veteran Congressmember such as Frank doesn’t see a problem with legislation that has a “major gap?” Besides, eliminating transgenders from the bill is more than a “major gap.” It’s sacrificing a portion of our community that desperately needs the protection. Transgenders suffer some of the worst employment discrimination in our community, and are all-too-frequently the targets of anti-queer violence.

Since the 70s, the queer movement has more often than not adopted the strategy of dropping gender identity from gay rights legislation, because it’s perceived to be too much of a hot potato. The rationale is that legislators are more likely to risk the wrath of their constituents if they don’t appear to be endorsing cross dressing or sex changes. I’m not convinced that fundamentalist Christians or conservative middle Americans actually split hairs like that. They don’t like LGBT folks–period.

Incrementalists would have us believe that if an exclusionary gay rights bill passes today, queer activists will push for transgender protections tomorrow. In Philadelphia where I spent my early activist years, an exclusionary gay rights bill was unsuccessfully introduced into City Council in 1973. It was reintroduced and passed in 1982. Over 20 years later (May 2002), transgender rights legislation finally made its way through City Council. Twenty years is a long time to wait.

In 1969, a riot in New York started by transgender folks led to the birth of the gay liberation movement. We owe it to them not to create a hierarchy of whose rights are more important or expedient for us to support. If continuing to push an inclusionary bill means waiting a few more years for it to gain the votes it needs to pass, then it’s fine by me.

Tommi Avicolli Mecca has been a queer activist since 1971. His writings and other projects can be seen at www.avicollimecca.com