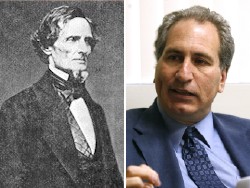 With the Tea Party taking over the Republican Party, we’re used to right-wing crackpot ideas being spewed from opportunistic G.O.P. politicians. But this weekend, Riverside County Supervisor Jeffrey Stone outdid them all – by suggesting that thirteen California counties secede, creating a 51st state called South California. Stone is upset at the state budget that Governor Brown and the state legislature passed (the first budget, since the passage of Prop 25, that didn’t require a two-thirds super-majority), and now feels that “local control” demands secession. But couched behind Stone’s self-righteous bluster is a political reality. Demographically, California is becoming more and more Democratic – and once the new lines are drawn to reflect the 2010 Census, Republicans will be even more irrelevant. The state GOP spent years hiding behind the “two-thirds” rule to block budget reform, but now the demographic dam has burst. Just like the South spent 50 years before the Civil War putting up anti-democratic roadblocks before seceding, now California Republicans have run out of options.