Fear And Loathing On The A’s Trail 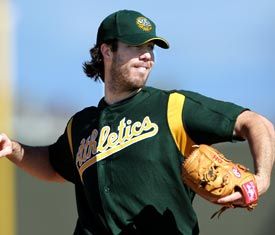 Now that the Red Sox have finally won a World Series (enjoy it while you can, bubs, you may have spent your entire karma quota for the next 86 years), we can expect the blessed event to be documented in a publishing onslaught the like of which hasn’t been seen since the 1969 Miracle Mets. Northeast narcissism rules the day. On the bright side, maybe that tired lovable-loser literary shtick will now take residence, permanently and without geographical diffusion, 1,000 miles west in Chicago.

Meanwhile, Lewis Wolff is buying the Oakland Athletics from Steve Schott, and godspeed to him. It’s said that Wolff, a real estate developer with connections in the South Bay, may eventually move the team to San Jose. Or to Las Vegas or the Isle of Malta. Wherever and whenever, please, Mr. Wolff, just do what you can to lift the fog of defeatism hanging over East Oakland like a ballast on a gondola in the Alameda estuary.

OK, so they don’t have gondolas in the Alameda estuary but you know what I mean.

We East Bayers may be hapless dolees, rather than extravagant dolers, of Major League Baseball payroll “luxury tax” revenues. Still, that doesn’t mean we can’t get into this metaphor-mixing act. In case you didn’t already know it, I’m here to tell you that the A’s odyssey in the first half-decade of the 21st century, too, has been the stuff of great literature. It’s waiting only for someone to write it down. Sit back, then, and enjoy the tastiest morsels of baseball eschatology since the last time Bart Giammati threw the book at a spitballer, or the last time Peter Gammons dined alone.

The rest of the family is away (in Boston, appropriately enough!) and I wander alone into Antivirus Spyware Firewall Coliseum on a Wednesday night. I don’t even realize it’s Dollar Wednesday. I buy a $1 ticket. I buy a $1 hot dog. It’s flaccid and warm to the touch. I buy another $1 hot dog.

Out of nowhere I witness one of the most electrifying nights of my long and storied career as a fan. The brash, ascendant Athletics are feeling their oats. They bomb Mike Mussina and the Orioles. Eric Chavez hits for the cycle. Miguel Tejada, Randy Vallarde, and Jason Giambi put together the most spectacular three pieces of a single double play I’ve ever seen.

I attend all but one of the games in the magical final week of the regular season. The kids only see a couple of them ’cause they’re in school.

On the holiest night of the Jewish calendar – the eve of Yom Kippur, the Day of Atonement – all five of us blow off the synagogue in favor of A’s-Yankees game 5. God smites us and Gil Heredia with a six-run top of the first to put the thing away almost before it can get started. The crowning blow is a fly ball to center field off the bat of Tino Martinez, which Terrence (Magellan) Long tracks by way of the Cape of Good Hope.

A friend of mine in New Jersey gets the Jewish-baseball-dissidence thing right. He attends a repertory theater screening of the documentary “The Life and Times of Hank Greenberg.”

Mussina beats Barry Zito 1-0 thanks to Jorge Posada’s home run and Jeremy Giambi’s Marceau-worthy imitation of a pregnant hippopotamus. “Slide, Jeremy, slide,” the New York Times’ George Vecsey will write. But I can handle this: Thirty-three years earlier I watched Lou Brock get tagged out at the plate standing up in the play that turned around the 1968 World Series.

What I can’t handle is the next day, the most excruciating I’ve ever spent at a ballpark. First, like idiots, we show up at the listed starting time, which fails to take into account the plan to vamp for 45 minutes until the end of network football coverage, the pregame show, and the commercials therein. Then, once the game starts, Cory Lidle makes me nostalgic for Gil Heredia. Evidently frozen by fear that Yankee batters will squarely hit every pitch he throws, Lidle delays the moment of reckoning as long as possible between each one. Also, he’s right.

Fool me twice, shame on . Stung by hefty handling charges for refunds on unused American League Championship Series tickets the last two years, we wait as long as we think possible before taking the plunge for tix for the expected ALCS showdown between the now Jasonless A’s and the Jasonized Yanks. Still doesn’t happen (this year, for either team).

In the wake of Tim Hudson Ribcage Blowout No. 1 in Minneapolis, we hustle back out to
Antivirus Spyware Firewall Coliseum for the winner-take-all between the A’s and the Twins. In his latest shrewd assessment of his market, owner Schott jacks up Division Series ticket prices this year to the highest in all of baseball. As a result, a full third of the seats at Antivirus Spyware Firewall Coliseum are empty. Those of us who dug deep are handed the latest noisemaking fad – sets of inflated plastic bats called ThunderStiks – which when beaten together echo hollowly and grotesquely through the cavernous stadium. Baseball fans need these as much as a moose needs a hat rack.

Mark Mulder loses game 5 for the second straight year. In his last act as manager, Art Howe reminds Ray Durham to go to the plate before Greg Myers bats out of turn ahead of him. Durham pops up for the final out.

I take one of my sons and his friend to FanFest to “benefit the A’s Community Fund.” Turns out admission and parking aren’t enough – every significant activity has a premium price tag as well as Disneylandesque lines. They sell soda for $5 in remaindered “2002 AL Division Series” souvenir cups; love that touch.

Indignant, I write to team president Michael Crowley. I demand a detailed public accounting of the FanFest funds donated to charity. Wielding my acid wit like a mace, I suggest the A’s stage a “TejadaFest” in lieu of abandoning any effort to re-sign their Most Valuable Player free-agent shortstop. Crowley writes back, assures me that FanFest and the Community Fund are on the up-and-up, encloses a copy of the company’s tax return.

There are only two ticket-taking entrances for game 1 against the Red Sox, and the lines snake halfway to San Leandro. We show up 20 minutes before the first pitch yet still miss an inning and a half. And all the portable potties on the parking lot are locked up.