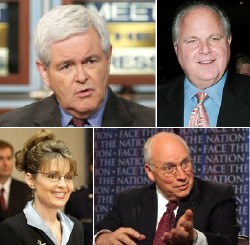 Republican Has-Beens, Amateurs, and Narcissists to the Rescue

Why are top Republicans still in “anything goes” campaign mode – dishing out cheap shots, absurd fantasies and readily disprovable deceptions? Is their governance indistinguishable from campaigning? Is outlandishness their road to redemption? Perhaps there’s some method to their madness – aside from waiting for Democrats to fail. Spearheaded by Dick Cheney’s delusions of doom, Republicans are coming to resemble clumsy, bad faith sorcerers, dispatching worst-case scenarios less about the future or winning new voters than scaring the gullible already on board.

In contrast, there are optimistic sorcerers, like President Obama. Or older ones, like Washington Irving in “Legend of Sleepy Hollow,” who summon fanciful spells because good ghost stories teach by bewitching:

“Certain it is, the place still continues under the sway of some witching power, that holds a spell over the minds of the good people, causing them to walk in a continual reverie. They are given to all kinds of marvelous beliefs, are subject to trances and visions.”

Is there anything less politically credible than transparently empty talking points, especially when delivered by tarnished messengers? They include: has-beens (Newt Gingrich), losers (Mitt Romney, Mike Huckabee), shock jocks (Limbaugh and offspring), discredited re-runs (Dick Cheney), celebrities (Jon Voight), or never-been, chance celebrities (Liz Cheney and Bristol Palin). What are Republicans talking about today with legs in 2010, let alone 2012? I ask because actor Jon Voight typified rightwing vitriol by calling for “an end to this false prophet Obama.” Compared to Obama’s feel for relevance, what matters to real people, Republicans aren’t even in the same game.

Take shrill defenses of torture years after its suspension. What moderate voters rush to Cheney’s dark embrace because he enacted waterboarding, claiming it works and it’s legal (his hand-picked lawyers told him so)? Likewise, when Gingrich impugns Supreme Court nominee Sonia Sotomayor as racist, this lie still offends Hispanic voters even after being withdrawn. Was Gingrich equally oblivious, when scoffing because Obama called himself “citizen of the world,” that Ronald Reagan declared the same words at the Berlin Wall? Are Republicans disowning their own neo-con, internationalist vision or shying away from our superpower footprint? Cheney still promotes pre-emptive attacks on Iran or anywhere else militarists smell danger.

Likewise, 95% of Limbaugh bellowing speaks not to future or the center, drawing on outdated spellbinding around his false piety and calculated outrage. How many listeners just tune in to snicker while this “big, fat liar” goes over-the-top, showing how many liberals he can slander on the head of his pin-brain? That Limbaugh has enough clout to censure would-be new voices daring to talk beyond the base speaks to the iceman already enveloping the party. Limbaugh’s contrived, terror-driven sorcery would be low farce were it not, like rotting corpses, still toxic.

Equally unpersuasive spellbinding – or sense of the future – comes from Sarah Palin, a real GOP officeholder who’s not old, balding, ugly, or male, thus her popularity with browbeaten women and horny hunters. But Palin’s recent public performances only dramatize her narcissistic, out-of-touch amateurism. Eager for tabloid media fights, she actually reinforces why 60% of voters judged her unfit too be president – a blatant gap in knowledge of national or foreign affairs. Instead of changing the future, this false prophet replays the drama queen, the martyr, along with her children, victimized by a “pathetic,” vicious media. She gives what she gets:
http://www.huffingtonpost.com/2009/06/11/sarah-palin-today-show-in_n_214587.htm

Thus, David Letterman is rebuked not simply for bad jokes about her unwed daughter getting pregnant, but for talking up “statutory rape,” showing “disrespect to females,” blaming him for the teen girl epidemic of “low self-esteem.” Without missing a beat, Palin then indicts Letterman as suspect pedophile (unsafe around her 14 year old) and, finally, the outraged fundamentalist invents a Bible lesson about sexual abuse of teenagers by older men. This malarkey goes beyond propaganda or prophesy into derangement, even hate speech. The “pathetic” media was quick to call out this righteous mother hen for being silent during the campaign when Jay Leno joked similarly about Bristol, “And you thought John Edwards was in trouble before! Now he has really done it.”

The point is, faux outrage, transparent pandering, and menacing predictions are not what Palin or the GOP need to win. Without establishing credibility on issues, Palin (and others) are obsessed with culture war sideshows, she forever parading her unwed, embarrassed daughter as if trophy to her parenting. But she typifies this misfit Republican army who, though desperate for ideas and a credible narrative line, can’t get beyond outrage, stridency, and negative visions. It is amazing to see undimmed ideologues closing ranks and marching into an Ice Age as the rest of the world takes on global warming.

Politics, goes the old joke, is the oldest profession not requiring degree, accreditation, or special talents, just election wins. But success eventually demands real-world competence, the application of a known skill-set practiced by bright politicians who understand their careers, who learn from experience, and who shift from what’s not working. It’s not as if no modern marvels of successful spellbinding exist: look only to our president in the White House. Are Republicans so blind they cannot look beyond delusion or self-inflicted damage and understand how to stay relevant? Neither the future, nor demographics favor blind GOP prophets leading the blind.