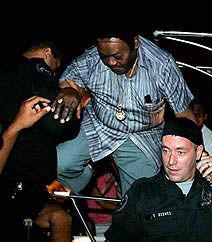 The photograph shows Domino, the singer behind the 1950s hits “Ain’t That a Shame” and “Blueberry Hill”, being helped off a boat near his home in the city’s Lower 9th Ward. His whereabouts since the rescue were not immediately known. Nor was there any information about his wife, Rosemary, friends said.

The neighborhood was heavily flooded when a levee failed as Katrina slammed into southeastern Louisiana and the Mississippi Gulf Coast. Thousands are feared dead in the storm, Louisiana’s governor and the mayor of New Orleans have said, though no official tally has been compiled.

White said she last heard from her father August 23, four days before the storm hit, and was unable to contact him Sunday.
“I didn’t have any information. I was just praying,” she said.
Writer Charles Amann said he last spoke to Domino on Sunday, and the singer refused to join the evacuation that was then under way. “He said to me, in that wonderful Southern accent of his, that no, he was staying on — that he had gone through the last one and he could go through this one,” said Amann, who is working on a book on the early days of the “American Bandstand” television program.

Many of those evacuated from the Lower 9th Ward were taken to the Louisiana Superdome and are being transferred to the Astrodome sports stadium in Houston, Texas. Alan Warner, an EMI Music executive, also saw the photograph of Domino’s rescue. But he said he did not know where the 77-year-old singer, born Antoine Domino, was taken afterward. “But the fact that he actually was rescued is just so gratifying,” Warner said.

“This is an unforgivable situation”, he told me this morning. “How is it that these reporters can get in, yet no food or water?” “It’s as if they don’t care. The poor, black population of New Orleans are suffering. I’m wringing my hands watching CNN and The Mayor of New Orleans on the airwaves, begging for more help.” If these people were white, would this be happening? It smacks of racism”, he told me.

Let’s hope to God it’s not.