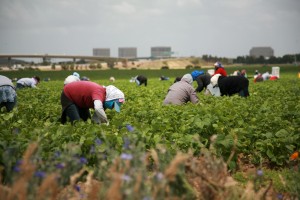 In the latest report by the Food & Environment Reporting Network, “As Common as Dirt,” produced in collaboration with The American Prospect magazine, reporter Tracie McMillan investigates how farm labor contracting–a ubiquitous, but relatively unknown, practice–often blatantly disregards labor laws governing wages, safety and health. She writes that it could be the most insidious source of abuse faced by farmworkers.
“Known in some circles as ‘custom harvesters,’ farm-labor contractors offer produce growers a ready workforce, but they also give these growers the ability to distance themselves from the people who pick their crops,” McMillan reports. “These contractors control the flow of money between farmer and worker as well as all the paperwork. They track hours worked, crops harvested, and wages paid and take responsibility for everything related to labor, from verifying immigration status to providing workers’ compensation.”

Farm labor contractors nationwide pay by the piece, which guarantees that laborers will work quickly. However, the suit alleges that this piece rate doesn’t account for the actual time farmworkers spend on the job and did not meet required minimum wage levels. Farm labor advocates view this systemized underpayment of labor as endemic to the contractor system.

Contractors can be found in the fields of nearly every handpicked crop in the United States, organic or conventional. McMillan reports how federal investigations–which determine whether workers are operating under safe conditions–dropped by 60 percent at agricultural workplaces between 1986 and 2008. In 2008, inspectors visited 1,499 farms of the more than 2 million in operation nationwide. This is because, she notes, labor inspectors often rely on complaints, rather than performing surprise inspections, leaving workers at risk for exploitation.

McMillan reveals that even when contractors are taken to task, they often avoid harsh penalties. The state of California, for example, had previously charged the labor contractor named in the recent suit. “The case was settled for $100,000, and no fines were imposed. Muñoz agreed to follow wage, hour, and safety laws going forward. Since then, Muñoz has not been inspected,” McMillan writes. As of June 2012, no payments had been made to workers, including Villalobos, who would likely qualify. Similarly, the current civil suit could take months to be decided or settled.

McMillan is the author of The New York Times bestselling book, The American Way of Eating.