False Transparency: Getting It Right about CCSF 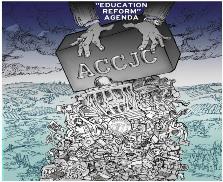 Over the holidays I smashed my nose walking into the crystal clear window of a newly designed store in a local mall. Though bruised and bloodied, my nose didn’t break, so rather than sue the corporation for damages, I have written a letter pleading with it to put stickers on the windows or merchandise behind them to protect others, especially children who might be running as they approach the windows. Apparently, in the three weeks the store had been open on the day of my accident, at least one other person had also tried to walk through the “transparent” opening.

This got me thinking about the concept of “transparency” and why I chafe at its popular usage. Why don’t people say, “I will strive to be more honest at work” instead of bragging about how “transparent” they are? Perhaps because hiding behind that word is a shield that, if you don’t know any better, you could easily smash into.

That’s how I would describe the San Francisco Chronicle’s recent article about City College of San Francisco (“Two City College managers spend big” December 27, 2015). Former Chancellor Art Tyler and his colleague from Houston, Virginia Parras, whom he hired into a newly created president position soon after he arrived in November 2013, seem to have misused tax payer dollars on expensive meals and travels—cross-country and international. The story implies that this kind of financial laxity got City College in trouble with its accreditors.

The truth is that prior to the accreditation crisis, top-level administrators did not spend lavishly on restaurants and travel. What you don’t see in Nanette Asimov’s article and so could arrive bloodied and bruised at its window, is that Tyler and Parras came to the college via a state take-over engineered by the California Community College Board of Governors (BOG) and State Chancellor Brice Harris. The special trustee, Robert Agrella, who hired Tyler, resigned in January 2014, and Harris has announced his retirement effective April 2015. Asimov does report that Tyler has been demoted and that Parras was asked to leave her job. But she doesn’t tell you that the BOG has now severely criticized the ACCJC, the accreditors who many contend have irresponsibly damaged City College’s reputation even though its stellar academics were never questioned.

Buried at the end of Asimov’s article is the fact that Tim Killikelly, faculty union president, highlights: “‘administrative spending has grown by 29 percent over three years, even as spending on the faculty has dropped 9 percent’.” The union and others critical of the accrediting agency that has been put on probation by the Department of Education have rung the alarm before. Their honest evaluation: that the parcel tax supported by San Francisco voters for their beloved college is being stuffed into a bloated reserve and used on high-priced consultants and overpaid administrators. You can walk right through the open door to that truth, which, according to the words engraved upon the City College entrance, “shall make you free.”