Fair-Wage Ballot Initiative in the Works 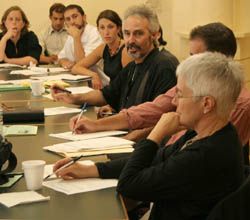 Danika Kavulich says she has “a personal stake” in increasing the minimum wage. “Being someone who’s currently working three jobs,” she comments, “it would be great to afford my studio apartment on one job.”

Kavulich is a member of Californians for Fair Wages (CFW), an independent PAC formed in January 2005 by Green Party members and other progressive activists. In May, CFW members proposed placing a statewide fair wage initiative on the November 2006 ballot, an idea that sparked the interest of wage advocates across the state. Last Friday, at a stakeholders’ conference called by CFW, representatives from a range of interested parties met to discuss the initiative and the campaign ahead.

For group members, the problem is clear. “It’s unconscionable that anyone could be working a full-time job in this country and not be able to live, or have health care, or care for their family,” argues Bay Area activist Steve Shapiro. Attendees agreed that California’s minimum wage has not kept pace with the increased cost of living, nor with skyrocketing housing costs across the state.

“The fact that [the national minimum wage] is only $5.15 an hour shows how much purchasing power we’ve lost,” laments moderator Barry Hermanson, former co-chair of the Living Wage Coalition. California’s minimum wage of $6.75 is better than the national wage, allows Hermanson, but not good enough. Through their proposal, CFW members hope not only to provide for future inflation, but also to restore the purchasing power they say California workers have lost over the past thirty years.

Though California policymakers are currently considering a minimum-wage increase (AB 48, authored by Assemblywoman Sally Lieber), CFW members do not expect it to pass. A similar bill, AB 2832, was vetoed by the governor last September. Even if the bill succeeds, activists argue that more work remains. Though CFW members welcome any wage increase, the bill’s proposed increase to $7.75 an hour would leave California residents below the poverty line, which is, itself, too low a standard in the eyes of minimum-wage activists. The poverty line is calculated upon the price of a standard food basket, regardless of the expense of housing.

To place their initiative on the November 2006 ballot, CFW must first submit the proposed legislation to the Secretary of State in September of this year. After the Secretary reviews and returns the legislation, the coalition is left with 150 days to gather the 385,000 valid signatures required to put the issue to California voters. Taking the standard 70% validity rate into account, however, CFW is seeking 600,000 total signatures.

For the time being, CFW’s first priority is to determine the specific terms of their initiative. Attendees discussed the merits of different approaches to achieving a “fair wage”, including indexing wages to the cost of living, defining different minimums in different areas, and making incremental increases over a set period of time. CFW treasurer Pat Driscoll favors the idea of incremental increases, emphasizing that this approach would benefit employers as well. “It’s fair to the worker, but it’s also fair to business,” explains Driscoll. “The way the minimum wage is handled now, there’s not a lot of predictability for businesses. This way, from a business perspective, they know what their costs are going to be in the future.”

Others argue that a minimum wage increase could result in substantial government savings. Referencing a UC-Berkeley Labor Center report, “The Hidden Public Costs of Low-Wage Jobs in California”, Aimee Durfee of the National Economic Development and Law Center adds that “[i]f wages in the state were raised to $8 an hour it would save the state $2.7 billion.” Durfee explains that many full-time minimum-wage workers receive public assistance to support their families. “Raising people’s wages would improve their standard of living, and make them ineligible for some benefits.”

Hermanson cautions that, in proposing any wage increase, activists must balance workers’ needs against an initiative’s political feasibility. “What is the wage rate that will give people a good increase, but still win at the ballot box?” he asks rhetorically, adding that a failed initiative, no matter how good it looks on paper, will change nothing.

Californians for Fair Wages has scheduled a follow-up meeting in August, and welcomes the participation of interested individuals and groups. Though members expect strong support for the initiative, few anticipate an easy campaign.

To find out more about and get involved with Californians for a far wage, call Barry Hermanson at 415-255-9494.