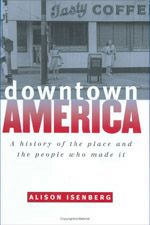 (Ed note: Due to increased focus on the proposed Mid-Market Redevelopment Area, we have decided to reprint this review of a book that discusses the track record of downtown redevelopment in America)

While reading Downtown America, I realized that most of my assumptions about the rise, decline and history of our downtown areas was wrong. The glory years of our fabled downtowns were actually quite brief, their postcard images were idealizations created by artists, and it was the Great Depression, not suburbanization, that led to downtown’s first major decline. But the book bolstered my assumption that redevelopment is a failed strategy for enhancing downtown life, and confirmed that the real estate interests pushing for urban renewal in San Francisco today have promoted the same wrong prescription for nearly 75 years.

You know those postcards of pre-1940’s America showing streamlined downtowns whose buildings are harmonized by color and height? Those cards showing downtowns as we wish they were today? Well, these downtowns did not exist then, either. In fact, as Alison Isenberg demonstrates in Chapter 2 of Downtown America, business groups paid artists to create postcards that erased potholes, overhead wires, trash, unsightly signs, and even pedestrians and traffic as part of a strategy to “simplify the unruly reality of the commercial street.”

Isenberg contrasts the actual downtowns of Burlington, NC, Montgomery, AL, and other cities with their far more beautiful postcard versions to show how city planners and business interests sought to entice consumers to shop downtown. Another part of the strategy was to create a vision of a clean, tidy downtown that merchants would then try to realize in the real-life city; of course, with traffic and pedestrians existing outside the postcard world, achieving this goal was difficult.

My prior reading on downtowns emphasized the post-World War II decline caused by the shifting of middle-class consumers to suburbia. The massive urban redevelopment projects that swept America in the 1950’s and 1960’s is widely understood as the chief strategy to entice these consumers back to faltering but now newly-built downtown shops.

But Isenberg shows that the heyday of downtown was actually quite brief. In fact, some developers were losing faith in downtown commercial districts by the 1920’s, only a decade after many were fully built. For example, Sears built its stores a mile from downtown city centers so as to avoid what it perceived as too much vehicle congestion and shopper inconvenience. And this was in the 1920’s!

Initially, chain stores were the icons of downtown America. Such stores as Woolworth and S.H. Kress formed the backbone of city’s chief commercial strip and attracted both urban and rural consumers. Even then there was fear that chains would weaken local businesses and drain money from the local economy, but it was the chains presence that
“certified” a vital downtown.

According to Isenberg’s account, the initial heyday of downtowns began in the teens and continued with mixed success until the Depression of the early 1930’s. She does not quantify a beginning and end period, but it appears that the nostalgia that many have for the good old days of the downtown commemorates a period that may have lasted less than fifteen years.

The 1930’s brought the first wave of redevelopment to downtown areas. Isenberg notes that in that decade “demolition and modernization became the dominant motifs of downtown development.” Commercial vacancies led office buildings to be demolished at an unprecedented rate, and they were usually replaced by parking lots or one or two-story buildings called “taxpayers” for their ability to generate net operating income.

Its not just post-suburbia America that had a love affair with the parking lot. In Detroit, the number of parking spots (in lots or garages) increased from 7700 in 1927 to over 31,000 in 1936. This pattern was similar in other cities, and demolitions were so widespread that there were fewer buildings in most cities in 1936 than 1929.

Keep in mind that these demolished buildings would today have been historic landmarks lending architectural luster to the boring skylines of modern American cities. But while “modernization” sounds like a better alternative to demolition, the results?because they are still visible?are an even more depressing example of the real estate industry’s lack of vision.

Older buildings had to be “modernized” during the Depression because real estate interests concluded that the modern consumer wanted to shop in a “modern” building. Isenberg displays a before and after photo of the truly spectacular Masonic Temple building in Oakland. Investors removed the building’s “gingerbread” and “antiquated doo-dads” and left a structure with clean, sleek and flat planes that lacked any architectural distinction. But American Architect magazine praised this modernization for allegedly enhancing land values.

While World War II brought increased commercial activity to downtowns, the post-war suburban boom cast new shadows over central city shopping districts. In one of the strongest portions of the book, Isenberg shows how real estate and business interests refused to “build on the emerging African-American shopping presence” and instead focused on making “America’s downtowns appealing to white, suburban middle-class women.”

This may be the book’s most critical point for those looking to apply history to today’s urban America.

With African-Americans eager to shop in the downtown stores near where they lived, the white real estate industry worked with public officials to not only ignore non-white shoppers, but to use public money to demolish their homes and neighborhoods. Isenberg convincingly shows how the pursuit of the white suburban women’s dollar led cities to drive away non-white consumers, and how business interests used the most overt racist arguments to drive African-Americans from the downtown area.

Isenberg is not the first historian to make this point but she most clearly demonstrates that America’s downtowns did not need redevelopment and demolition to sustain themselves, as their was a sufficient African-American consumer base to enable shops to thrive. This book puts the lie to the line that in America it’s not about white or black but rather it’s about green—the money to support downtown retail was there, but it was owned by members of the wrong race.

Isenberg has a long additional chapter linking the civil rights struggles to the protests by African-Americans against discriminatory practices in downtown stores. She describes how the riots of the 1960’s built further momentum for tearing down “the slums” and for downtown’s demise, when an alternative course?end discrimination against blacks in employment and shopping—was readily available.

It is hard to see how anyone could read this book and still support ventures like the Mid-Market Redevelopment Area. As residents of blue cities in a blue state, we are supposed to be guided by the facts about urban renewal, not blind faith that it will be “different” this time.

The facts about urban redevelopment are clear: its goal is displacement of non-whites and the non-middle class and their replacement by upscale consumers. This is the history from cities across America, and San Francisco’s own deplorable record in the Western Addition and SOMA.

Isenberg provides information that readers will not easily forget, and, having read many others, this is likely the definitive book on America’s downtowns. Unfortunately, she does not make it an easy read. It seems that a long sentence is always better than a short one, and the material within chapters is often organized without clear direction.

But if the test of a nonfiction book is whether readers will remember the key points, Downtown America passes with flying colors. It is not yet available in paperback, but when it does become available it should be a must read for anyone concerned with charting a new future for San Francisco and urban America.