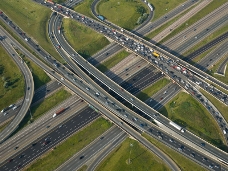 A federal loan awarded to a California highway illustrates how TIFIA, the “innovative” transportation financing program that was expanded as part of MAP-21, is still funding business-as-usual highway projects.

U.S. DOT announced last week that it would back California’s SR 91 highway expansion in suburban Los Angeles with $421 million in low-interest loans. The project is a $1.3 billion traditional freeway widening with no special environmental or social merits. It will extend two express lanes and add two additional lanes on an eight-mile stretch between the Inland Empire and Orange County, and relieve the “local commuter nightmare,” according to Congressman Ken Calvert (R-CA). The project was also the recipient of $20 million in TIGER grants.

Since the program launched in 1998, TIFIA has funded 32 projects to the tune of $10.5 billion. When it was dramatically expanded as part of MAP-21, guidelines for the federal loan program were changed so that essentially the only criterion for project acceptance is creditworthiness. Since then, observers have been wondering whether the “innovative” program would simply greenlight a backlog of highway projects. (Even when the program had more criteria attached to its loans, the Government Accountability Office found that it tilted toward “large highway projects.”)

While most TIFIA projects are about moving cars, not all of them are. Since MAP-21 was enacted, TIFIA has funded $219 million in transit and pedestrian projects — including the Orange Line Expansion in Dallas and the Chicago Riverwalk — and just more than $1 billion in highway projects, including SR 91. That’s about five dollars in highway spending for every dollar spent on sustainable transportation. This is basically the same split that existed before MAP-21. The GAO found that in 2010 and 2011, 16.6 percent of TIFIA funds were spent on transit.

Awarding this TIFIA loan was one of the first moves by new U.S. Transportation Secretary Anthony Foxx. In a press release last week, Foxx oddly called the road an example of “fix-it-first” policy, although it is quite clearly a road-widening project. “This project is a job creator that will improve mobility in the region and better connect Orange and Riverside counties,” Foxx said.

Will TIFIA continue to fund more of these “innovative” projects to build new highway lanes? It seems likely.

This piece first appeared in sf.streetsblog.org