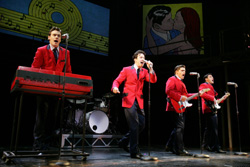 ‘JERSEY BOYS’ gives new meaning to the word “Blockbuster”. It’s a skillfully told story of four boys from New Jersey, who used to sing their harmonies under a streetlight to become the world famous group known as The Four Seasons. In their early years they sang under different group names, such as “The Romans”, “The Lovers” – then they came up with the name of “The Four Seasons” which fit like a glove. The first act is brisk as the story unfolds, interspersed with songs from their early years. The Italian New Jersey kids were street wise, and they had the ambition to make it to the top. Oh, it wasn’t easy. They had to do background singing for others – they were taken advantage of by record producers and by some of the Clubs that they performed at. Their first break was when R.C.A records offered to record one of their songs.

The story is not only wonderfully poignant, but mind blowing as well. You will definitely get goose bumps when the young Frankie Valli (Jones) and the group come up to stage front, and belt out ‘Sherry’. This was so hot – that I was afraid that the fire alarms would go off. Christopher Kale Jones (Valli) hit all the high notes of the song…and in the original key. Needless to say, the audience of all ages leaped to their feet to give the most explosive, extended applause that I have ever experienced in a theater.
At first glance when you come into the theater the set might remind you of the classic Elvis Presley movie, Jailhouse Rock. But, suddenly they do marvelous things with the set and the lighting.

I have never, ever seen lighting effects like this. It is extraordinarily superb. This isn’t just a show about singers – it’s a big, sweeping spectacle of Song, lights and real talent. You will also get some insight into the back room dealings with record companies and producers. It’s not all icing on the cake.

In the first act, there are many rousing songs like “Who Loves You”, “Big Girls Don’t Cry”, “Walk Like A Man”, “My Boyfriend’s Back” and My Eyes Adored You”.
And the audience did indeed adore “The Four Seasons”.

In the second act, when Valli becomes the lead singer and “The Star” the hits just keep on coming. There is “Rag Doll”, “Can’t Take My Eyes Off You”, and “Will You Love Me Tomorrow.” Total, there are over fifty songs in the musical. Every one of them a towering, memorable achievement.

This brilliantly crafted drama will make you cry, laugh and tap your feet. It’s unexpectedly moving and an absolute delight with a captivating cast. And as an extra treat on opening night, the original pop stars (The Four Seasons), were in the audience and came up on the stage for the Curtain Calls, each one standing next to the actor that portrays them. What a thrill! “Jersey Boys” is one of those rarities that you want to see again…possibly many times.
The Masterful Cast are: John Altieri (Bob Crewe and others), John Albrey (Nick DeVito), Erich Bergen (Bob Gaudio), Michael Ingersoll (Nick Massi), Frankie Valli (Christopher Kale Jones), Tommy DeVito (Deven May), is the tough street wise and savvy Jersey guy who put the group together. He is the glue in the show and a great actor. Jersey Boys has a huge cast. Lucky for San Francisco, they all are high-voltage actors who can play many roles in the show.

From the Pop Art backdrops to the sensational acting and singing – this entire production is probably the best thing you will see in a long, long time.

What else can I say? Jersey Boys is stylish and Jersey Hip fun. And then of course, there is a plethora of curvy babes. It’s a triumph!

The Ghost of Christmas Present conjures for Scrooge (James Carpenter, center) visions of the holiday season–including a feast of opulent fruits who dance before him.

This has been the best Christmas season ever with two new versions of “A Christmas Carol” playing at two theaters in the City. There is the tongue in cheek Gay Version (Scrooge is a Gay Fashion Designer) at the NCTC, and on the A.C.T stage is their latest revision of the Dickens’s story. And it also happens to be the most entertaining. They have made it a lot more fun. It’s not your Grandmother’s old-fashioned telling of the standard.

This version is a lot more fun. For instance Scrooge says to Christmas past: — “How dare you talk to me while I’m in my underwear!” Yes, this Scrooge is a little more bitchy than we are used to you. There is less of the King Lear kind of performance in this Scrooge. And that is a good thing. The story is now much more accessible to Children and adults alike who didn’t particularly like the Shakespearian touch.

This cast is more vulnerable, more lovable and we see even in these hard times that people still can have wonderful times, while still having very little material things. With the new freshness – the Carey Perloff production has succeeded in turning “Carol” into
A snazzy holiday treat that is fun and spirited. It’s a surefire crowd pleaser. The dark comedy drama leaves you with a sunny feeling.

Also, you will be astonished by the First Class production. The costumes are elegant and period perfect. The actors are spirited and have some great malicious moments. This time the Scrooge experience with Christmas takes us on a thrilling, exciting adventure with songs and original score by Karl Lundeberg.