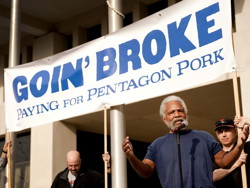 Tax Day (April 15) has passed with little attention to the chief reason U.S. students are overwhelmed by debt, millions are homeless or inadequately housed, children go to bed hungry and our public transit infrastructure is being destroyed —the allocation of half of every discretionary dollar to the military. The U.S. spends more on the military than the rest of the world combined, yet it is never enough to ease our fears. The cost of “national security” is depriving millions of Americans of the resources necessary to fulfill their dreams and leaves much of the nation living in austerity. For all of the importance of raising taxes on the wealthy, military bloat steals far more of the nation’s wealth than low tax rates. An outsider seeing the many constituency groups fighting over a pie in which half has already been given to the military would ask why people accept this status quo—but that question is off the national radar in the United States.

In 1997, four years before 9/11 and a time when the U.S. was not formally at war with any country, then Congressman Barney Frank observed that “we are either going to cut education, health care, Superfund, cops on the street or defense. Two years later we got the answer, as the Clinton Administration added $9 billion to the 1999 federal budget while saying it could find no additional funds for a host of domestic programs.

I wrote a book for UC Press that came out in 1999, Reclaiming America, that discussed grassroots strategies for reducing Pentagon bloat. But military spending soon exploded under George W. Bush, and the Obama Administration has been little better.

The President’s “Grand Bargain” seeks to increase public investment by cutting Social Security and Medicare, not slashing unnecessary military bloat. Obama’s message is that Democrats are as committed to a massive military industrial complex as Republicans, even if this means that education, housing, environmental protection and public transit are starved for funds.

The President’s budget proposal restores all but $100 billion of the sequester’s $500 billion in military cuts, restoring equal amounts from defense and nondefense programs. Obama’s proposal prompted Howard Dean to threaten to quit the Democratic Party over such skewed budget priorities

After the Sandy Hook massacre, politicians from the President on down began asking why the U.S. was spending trillions on “national security” while kids could be shot down in their schools due to the lack of gun regulations. The same question should be asked about why the U.S. has troops in Japan but lacks adequate funding for police in Oakland and other cities.

The U.S. has expensive troops and heavily fortified consulates throughout the world, but can’t find the money to rebuild its own schools, bridges, and streets. It’s long been argued that the U.S. keeps troops abroad to protect Wall Street and multinational corporate interests, but in 2013 there does not even appear to be a public debate over whether this is a proper use of public funds.

For decades, polls have shown Americans supporting cuts to military spending over reductions in education and other domestic programs. But as with polls showing overwhelming support for increased gun regulations, politicians ignore the public’s will in favor of military contractors and their campaign contributions.

The traditional media describes Wayne LaPierre, the National Rifle Association, and the Gun Owners of America as paranoid in their opposition to gun regulations, but that term is never used to describe a nation that spends more money on the military than the rest of the world combined and still does not feel safe.

As Pete Seeger wrote in the chorus of his legendary anti-war anthem, “Where Have All the Flowers Gone:”

Seeger wrote that song in 1955, well before the Vietnam War and nearly fifty years before U.S. troops entered the “big muddy” of Iraq and Afghanistan. When it comes to spending taxpayer dollars, the United States has still not learned to put the people’s needs first.

Randy Shaw is also the author of The Activist’s Handbook and Beyond the Fields: Cesar Chavez, the UFW and the Struggle for Justice in the 21st Century