by Randy Shaw and Paul Hogarth on November 3, 2008 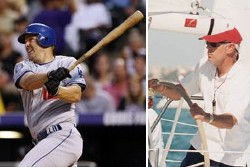 When Jeff Kent played for the San Francisco Giants, he was often referred to as a “hard ass” or “redneck.” It appears that another description would be “homophobe,” as Kent has donated $15,000 to the ballot measure seeking to end marriage equality. Kent’s experience playing in San Francisco and Los Angeles, both of which have large gay and lesbian populations, clearly did not impact his attitudes.

Meanwhile, a review of local campaign statements shows the largest single donor to “No on B”—which an affordable housing set-aside—is Thomas J. Coates of Arroyo and Coates. Coates is a millionaire Republican realtor who gave nearly $1 million to the Prop 98 campaign to eliminate rent control—which was overwhelmingly defeated last June.