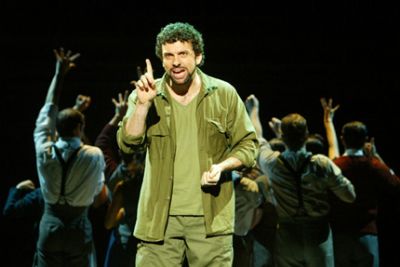 EVITA! EVITA! EVITA! — the crowd shouts as their idol, their queen, their savior stands on the balcony with a bank of microphones in her face. Evita the musical was first staged in 1978, at the Prince Edward Theatre in London. A Royal Palace for the launching a musical legend and the legendary Eva Peron, who was an illegitimate poor child. She was even forbidden to attend the funeral of her middle class father. However, as she grew older, Eva quickly learned the power of sex. They were building blocks to get to the top. You get the visual view of the revolving door where Eva climbs the ladder to fame by using men in power to succeed in the song “Goodnight and Thank You.”

It’s an irresistible story. And lest you think that you are above doing what Eva did – think again. As one of the lyrics in the musical so aptly points out “You Are the Same.” Evita opened in San Francisco at the Orpheum Theater before going to Broadway with its star Patti Lupone in 1979. The critics hated it in New York – but it set box office records and won numerous awards. Hal Prince directed.

So how has the musical fared over the years? I have seen every production in San Francisco since it first opened at the Orpheum. Each time the quality seemed to lesson. I was excited to hear that Hal Prince would collaborate with Larry Fuller in this production. Let me put it this way. It is better than the ones that preceded – but it is less than what I expected. There have been some changes. It is now a show that stars Che Guevara. He has been given more of a presence. And it is a wise move, because BRADLEY DEAN is no doubt the best Che since Mandy Patinkin. This guy has such a great voice that I was ready to overthrow the Peron regime and put him in the Royal Palace. No matter what he sings “High Flying Adored,” the song about Evita or “Oh What a Circus”, that tells about the adoration of Idol Evita. Dean’s voice is terrific and profound. You are spellbound. Your eyes and ears are glued to him. Luckily – you have plenty of time to spend with Dean- because he is in practically every musical number. The audience agreed. He became their “High Flying Adored”. Dean is a special actor/singer/dancer that doesn’t come along very often! His portrayal of Che is hugely inventive!

Another standout in “Evita” was the emotionally draining song about ‘What Happens Now’ in the song “Another Suitcase, Another Hall”, sung heartbreakingly by Kate Manning. Evita throws out the previous Mistress as she takes over. Feeling sorry for the poor girl who is only wearing a slip – she touchingly puts her expensive fur over her shoulders. See, she did care for the people.

There is some great musical numbers in this musical opera. Yes, Opera – because that is what it really is. The story is told in the songs. And it’s a fascinating story. Philip Hernandez is a noble looking Juan Peron and Kathy Voytko has a strong voice, but I did not feel much emotion in her portrayal. Great talent – but maybe not a great Evita. I was also disappointed in the character Magaldi (Gabriel Burrafato). It is a great part – but it seemed to me that for whatever reason – they downplayed it. Bad idea – since it is crucial to the rise of “Evita”.

There are changes in a few of the scenes in this “Evita”. Some of them work – and some of them didn’t seem to enhance the musical. The ending is very odd.it just trailed off after Che announces that a statue was to be erected of Evita. “They only got as far as the pedestal”, he says. Then the lights go dark. Strange ending for such a dynamic musical. Dear Mr. Prince: Here is a better idea. How about having the deposed mistress reprise at the ending “What Happens Now” – then fade the lights slowly.

RATING: THREE GLASSES OF CHAMPAGNE!!! [Recipient of the Lee Hartgrave Fame Award goes to Bradley Dean as Che for Best all around talent in a Musical.]

MISS COCO PERU REGRETS THAT SHE IS UNABLE TO BE UNDAUNTED THIS EVENING! A critic said of Miss Coco Peru that he is a drag queen extraordinaire. O.K. – I’ll go along with the drag queen part but I’m not too sure about the other stuff. I will say one thing in his favor – he definitely is a drag queen – there’s no doubt about that. And unlike many drag queens he does do his own singing, and he does have a good voice – with quite a range. And of course, he looks fabulous in his dresses.

Miss Coco belts out an exciting version of “Make Your Own Kind of Music.” In one of his bits he throws the Rainbow flag on the floor – and sez “I hate this Rainbow s–t” – the audience didn’t seem to be too amused by that. Turns out later that he just loves the Rainbow S-t. He even drinks from a Rainbow cup.

Miss Coco tells stories about his life. You know ordinary things like “I’m on a subway – and this guy calls me a faggot. I say to him – I’m wearing a dress, don’t you think I figured that out years ago.” The wording may not be exact, but you get the idea. Mildy funny – but not terribly original. I’m sorry – but I still like Lypsinka better. I don’t want to hear their stories – I want them to make fun of the establishment and of celebs. That’s what a drag queen should do. I know Miss Coco has a following, who think that he is a hoot – but I have seen better drag shows in dirty little alley bars.

This mix of camp and gloom, was weighted on the side of gloom for me. Sure I smirked a few times. I even tried to keep the corners of my mouth open in a perpetual smirk with toothpicks. Nothing worked.

Clinton Leupp is Miss Coco. The name of his show is Miss Coco Peru is Undaunted. And so is Lee Hartgrave undaunted. I wasn’t even dented. Her flyer says “All her life she dreamed of fame. She dreamed of Fortune.she’s still dreaming.” My advice: Dream Harder.

AT THE NEW CONSERVATORY THEATER. RATING: TWO GLASSES OF CHAMPAGNE.

TERESE GENECCO took Michael’s Octavia Lounge by storm. Actually it was more like a Tornado. Her show was called “Somebody Loves Me!” and everyone did. Genecco is a big fan of Frances Faye – a huge cabaret star in the 40’s, 50’s and 60’s and Genecco showed that influence with a fabulous twist and style of her own. She starts out with Go, Go, Go, Go – (in the Frances Faye tradition) as an intro to a really outstanding version of “The Man I Love.” That starts the fireworks and continues with an absolutely exciting “You’re My Thrill” and then it’s the Styne/Comdon/Green “Just In Time” with a seductive low down Sax underlying the vocal.

I was in song heaven when she sang one of my long time favorites “Don’t Blame Me.” – then in this non-stop show of extraordinary arrangements and superb vocals she hits us with a song that is very closely identified with Frances Faye – “I’m Drunk With Love”, EXTRA COOL! Was I in altered states – or was I really enjoying this show that much? I couldn’t believe that anyone could take these old chestnuts and bring so much life back into them. It’s a Cabaret miracle – and the Mother Terese is Genecco. Not only is Genecco one of the most charismatic singers to come along in a long time – but also she is also devilishly fun. When I first saw her in the room bringing water and stuff to the little stage – I thought it was her agent.

Then the bright lights came on in the room (and they are bright) – and sang with the spotlight right in her eye. How did she do it? I swear she’s the love child of Anna Magnani and Kaye Ballard with a little Stockard Channing thrown in for fun. The band is FULL THROTTLE THRILLING! They are DANIEL FABRICANT, BASS – RANDY ODELL, DRUMS – RICARDO PRUETT, BONGO – LORENZ FILL, SAX AND BARRY Lloyd on PIANO. The arrangements will make you clap and believe – just as if you have been saved and reborn. Fabricant is a Gemini (so you already know how multi-talented they are.) He plays for many singers in the area. This time he did a solo on “There Will Never Be Another You.” And yes, the audience wanted to sing it back to him. Quite simply the best! Genecco asks us – “Are your little Cabaret ears hurting?” Yes, and they are saying – Give me More, More and More!

Terese Geneco will be at the Plush Room this Wednesday Evening, March 23rd.

RATING: FOUR GLASSES OF CHAMPAGNE!!!! [A recipient of the Lee Hartgrave FAME AWARD – Cabaret singer of the year!

RANTS – RAVES – TIPS buzzin@aol.com or beyond chron Letters to editor.