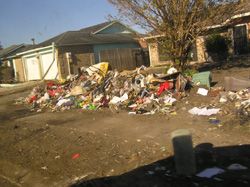 As we pull up to the apartment complex in a neighborhood East of New Orleans, all Diane’s belongs are being thrown from her second story window. A worker in a forklift hauls her belongings to the street, dumping Diane’s lifelong belongings on the curb. This is a common sight in New Orleans where evictions are increasing and what little rights tenants have are being ignored.

Since October 25th, when the Governors’ Moratorium on evictions was lifted, according to court clerks there have been 100 evictions filed by landlords every day in New Orleans. In the past 2 and a half months the landlords have simply been posting eviction summons on tenants doors for a hearing 3-5 days later, when the tenants do not show up to the hearing because they were unaware of the summons. The evictions are then pushed through the court system. If the court rules in favor of the landlord, 24 hours later the landlord can remove all of the tenants’ belongings from the unit. Landlords, under Louisiana State law, are not required to send a notice to the address where tenants have been relocated post-Katrina. Even if the landlord wanted to forward the eviction notice to a tenants’ address, Federal Emergency Management Agency (FEMA) refused to release evacuees’ information to the City of New Orleans.

November 22 a decision was reached after housing lawyers filed a lawsuit on behalf of Brenda Brooks, a New Orleans tenant and evacuee who was never informed of her eviction. Although the decision does not help Brooks with her eviction, the decision helps future tenants fight their evictions. The decision, which is being called an Eviction Moratorium, extends the 3-day summons to 45 days. This gives breathing room for tenants and housing organizers. In addition, landlords must not only post the eviction summons but also send the summons to the tenant’s current recorded address. That means that FEMA is court-ordered to release the names and address to the evacuees to the City of New Orleans.

According to National Low Income Housing Coalition, 140,000 units were destroyed in New Orleans, many of them affordable housing. Since Hurricane Katrina the housing market has risen dramatically, causing a housing crisis. Tenants who want to move back cannot afford the high rents.

“People cry to go home, they tell us there is no place to go, but there is housing for us,” said Sam Jackson a displaced resident. “They don’t want us to come back, they want to kick out low-income people out of New Orleans.”

New Orleans Housing Emergency Action Team (NO HEAT), a coalition of local housing groups, activists and tenants have formed to fight evictions, the raising rents and support New Orleans residents right of return. Using a combination of direct action and legal strategies, NO HEAT aims at stopping evictions and the closing of public housing, whether it’s in the courtroom or stopping eviction through direct action.

Jeremy Prickett, a housing organizer who works with Anti-Eviction Common Ground, a tenants right group in the NO HEAT umbrella, said, “People with money and power are exploiting this hurricane and trying to shape New Orleans in their image. They are not talking about rebuilding New Orleans they are taking about revitalizing it.”

The Eviction Moratorium is a step the housing fight that local activists are calling ethnic and class cleansing.

“This city can’t make it without minority groups. Minority groups built this city,” said Ralf Lewis, a New Orleans tenant as he showed us a notice to vacate.