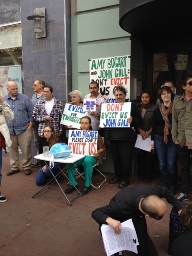 Tenants and their supporters rallied in front of 1049 Market Street on November 12, demanding that landlord John Gall withdraw eviction notices for the building. Gall wants to convert residentially occupied units at 1049 Market to offices, a move that would displace tenants and reverse progress toward revitalizing Mid-Market. It’s the residents who keep the street alive after office workers leave, which is why the city is trying to increase housing in the area.

In a September 13, 2013 memo to tenants, the owners of 1049 Market claimed that “overly restrictive” building codes “forced” them to evict the tenants. But their eviction efforts have continued even after DBI suspended the notice of violation that allegedly triggered the termination notices. The Planning Department has since ruled that 1049 Market has abandoned its historic office use, requiring Gall to apply to be a new office building under the limits of Prop M. This is an office project going nowhere. Yet despite Mayor Lee, Supervisor Kim, DBI and Planning all telling Gall to stop these evictions, he continues to proceed—which is why tenants and activists were at 1049 Market demanding answers.

I’ve defended tenants in many illogical landlord eviction attempts, and 1049 Market makes as little sense as any. Here the city is working to help a landlord take advantage of Mid-Market’s skyrocketing residential rents, only to have the owner rebuff this assistance in order to persist in a costly and ultimately fruitless plan to convert to an office building.

John Gall picked the wrong neighborhood and group of tenants for such a plan.

According to tenants, roughly thirty-two of the seven story building’s 84 units remain occupied (the sixth floor is legally live-work and is not facing eviction). Chandre Redack, who has lived at 1049 Market for nine years in a large studio with kitchenette but no private bathroom, spoke for many in noting the stress that the eviction threat has caused, “I’ve had to take time off work and worry about where I can go. There’s no place I can find in only 60 days (the notice period).”

But the owners plans face multiple and likely insurmountable hurdles.

First, they will need permits from DBI to change uses. These permits will be appealed to the Board of Appeals which can deny them with four votes.

Second, they will need building permits. These will also be appealed, and can be rejected with four votes.

When you consider the universal condemnation of the 1049 eviction notices by what Mayor Lee often describes as the city “family,” I think the tenants have a very good chance at winning these appeals.

Third, because the Planning Department has determined that 1049 Market has abandoned its office use, the owners will have to get in line with other office projects and potentially come under the limits of Prop M. Gall and his partnersu will have to fulfill all of the mitigation costs associated with a new office development.

Fourth, the owners face a very uphill battle trying to evict the tenants when they lack any of the necessary permits to remove units from housing use. They cannot use the Ellis Act because they are keeping the top-floor live-work units and not vacating the entire building (Disclosure: Stephen Collier, my colleague at the Tenderloin Housing Clinic, is representing three of the tenants facing eviction and may end up representing more).

Fifth, the owners will have to convince the Planning Commission to approve a new office development. The odds are slim, given the Commission’s pro-housing record.

Finally, if the owners somehow got Planning’s approval, the decision will be appealed to the Board of Supervisors. And with Mayor Lee and Supervisor Kim both strongly opposed to the evictions and conversion, the owners’ chances of winning at the Board are nil.

Fortunately for Gall and his partners, there is a much easier and more profitable way out.

DBI has given Gall an easy way to legalize 1049 Market for housing. In this rental market, that means huge profits.

Mid-Market needs the type of housing that 1049 Market provides. Active residential uses will make Mid-Market between 6th and 8th Streets less dark and foreboding at night, and are critical to the overall area’s revitalization (the new Trinity buildings on Market and ACT’s Strand Theater project will help, but both are still a few years away).

The legalization of residential uses at both 1049 and the adjacent 1067 Market make so much economic sense for the owners that there is a great opportunity for a “win-win-win” solution for the owners, tenants, and the city. That may explain why April Veneracion Ang, aide to Supervisor Jane Kim, reported at the rally that Kim is “encouraged by recent conversations with the owners.”

With the holidays approaching, Gall and his partners should withdraw the eviction notices now. They should begin working to create a great housing environment at both 1049 and 1067 Market.

Mid-Market’s revitalization requires housing in addition to offices and the arts The 1049 eviction crisis has reminded us of housing’s vital role in Mid-Market’s future.