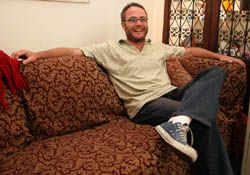 On December 16, 2003, reports Brian Basinger, God spoke to him in a dream, saying, ‘You must organize housing for people with AIDS.’ Basinger complied, and the AIDS Housing Alliance of San Francisco has been in operation ever since.

Or at least, that’s how he tells it. Activist Brian Basinger credits divine intervention for his accomplishments, but it’s clear that he too played a part. Basinger is a dynamo. As he speaks, his eyes flicker animatedly behind bottle-green glasses; he gestures, and leaps up readily from his chair to demonstrate points. He does not look like a man with a terminal illness.

Basinger is HIV-positive, and so is his boyfriend, James Nykolay. In 2002, Nykolay was immobile and underweight, living in a decrepit apartment with no kitchen and no phone. Every day Basinger, himself “skin and bones”, would hike up the street to bring Nykolay meals. “He couldn’t get Project Open Hand meals delivered, because he had no freezer to put them in,” he recalls. “We couldn’t even plug in a hot plate, because it would blow out the electrical system.” Basinger shakes his head. “This city’s idea of AIDS housing is to put someone in a crack hotel.”

Eventually, Nykolay escaped his miserable flat and moved into Basinger’s Pearl Street building, a gay safe haven ravaged by AIDS. “I was the last of thirty gay men alive there,” Basinger says – including the building’s original owner, Jack Hamm, who he remembers affectionately as “the Mother of Pearl.” But in 1997, Hamm was succeeded by a new owner, one who saw Basinger as an obstacle to dot-com-era profits.

“She was planning on selling the building,” reports Basinger, “and she was bent on evicting me . After I got sick, she thought I’d be too weak to defend myself.” The landlord refused to accept Nykolay’s Section 8 voucher, and taunted him, saying she’d evict Nykolay once his boyfriend died. Basinger isn’t one to back down from a fight, but he was tired of living under threat – especially threats to Nykolay. Together, the two struck out to find a new apartment.

“Naively, I thought it would be easy,” remarks Basinger, raising an eyebrow. For five months, the two men trekked through the city, looking for housing. Few San Francisco landlords wanted to take on the couple, not only because of their HIV status, but also because of Nykolay’s Section 8 housing voucher – one that he’d lose if they didn’t find housing within the next month. Still worse, both men were gravely ill.

“We were on our deathbeds,” recalls Basinger. “James only had one pair of shoes, and he’d put Safeway bags on his shoes with rubber bands, and we’d go walking from one apartment to the next. He has myelopathy [spinal cord disorders] and neuropathy [severe nerve pain]. I was spiking fevers . and he was on OxyContin, over a gram a day, for the pain. The moment he sat down, he’d fall asleep from the medication and the exhaustion.” He smiles fondly, a survivor’s smile. “I’d have to kick him under the table, just to keep him awake.”

Basinger was “flabbergasted” by how difficult it was to find housing, especially given his relative advantages. “We had all these things going for us,” he marvels. “I’m white. I’m college-educated . I’m driven as hell. My boyfriend is handsome, and we were in a strong, committed relationship, to provide the moral support to keep pounding the pavement.” He shakes his head. “And if we were having this kind of problem? I thought, ‘I can’t imagine what the others are going through.'”

Of course, Basinger doesn’t mention the disadvantages he’s overcome: at age fifteen, he came out to his Missouri family, who promptly locked him in the basement, then kicked him out for good. They were afraid he’d give their newborn baby ‘gay cancer’. Still, Basinger was right: he wasn’t alone in his housing woes.

“Housing is the number one unmet need of people with AIDS,” argues Basinger. He cites the inadequacy of government AIDS housing resources: only 1,000 total units of AIDS housing have been created, and only 275 rental subsidies exist – a third of which go unused, because tenants can’t find receptive landlords. What’s more, says Basinger, most AIDS advocacy groups have left HIV-positive tenants in the lurch. In his quest for housing, Basinger turned to mainstream AIDS organizations such as the San Francisco AIDS Organization and Catholic Charities, but was turned away.

“They’re afraid of turning off wealthy donors,” he scoffs. Service providers are often reluctant to stick out their necks for tenants’ rights, explains Basinger. “They get paid to provide rental subsidies for people with AIDS, but protecting existing housing? They don’t get paid to do that.” His frustration and disappointment with these groups would later shape the AIDS Housing Alliance. “They became a wonderful anti-role-model,” he quips. “The AIDS organizations didn’t do anything. So they left it for us to do.”

Finally, after countless interviews and hundreds of dollars of application fees, Basinger and his boyfriend rented an apartment from Bill Jones, a sympathetic landlord who had lost a brother to HIV/AIDS. It was in Jones’ building, says Basinger, that he heard God’s voice; at the time, he was taking Sustiva, a medication that produces vivid dreams. Shortly after he woke, the building manager called. “He said that two more units were available, and he wanted to rent them to people with AIDS.” Basinger’s face glows. “And within five minutes, I knew what I was supposed to be doing.”

In the past, as an employee of the Positive Resource Center, Basinger had provided work referrals to HIV-positive clients. It wasn’t a big leap, he says, to do housing referrals, linking HIV-positive tenants with welcoming landlords. In a characteristic flurry of energy, Basinger picked up the phone: by noon, he’d secured free office space from the Housing Rights Committee, and press coverage from both the Bay Area Reporter and the Chronicle. He beams. “We created the AIDS Housing Alliance in three hours.”

In its first year, the AIDS Housing Alliance of San Francisco served around 300 households using a staff of two and a budget of $13,000. This year, Basinger’s goal is to serve 1,000 households, and the group is well on its way. Apartment seekers from Massachusetts to Washington State have contacted Basinger for help finding Bay Area digs; once, a Hawaii widower showed up unannounced at his office, ready to relocate. “It was fine,” he says, grinning, “but you know, he could have called first.”

The activist volleys between pride in what the group’s accomplished and agitation over what it hasn’t – yet. “There’s a lot more that’s out there [to do],” he insists. “The need is so great – it’s like a vacuum.” Basinger wants to expand his list of friendly landlords, and to create a web-based service, a la Craigslist, to match HIV-positive roommates. “If there were more of me .”

His voice trails off. There may be only one Brian Basinger, but San Francisco’s HIV-positive tenants are more than happy with the one they’ve got.