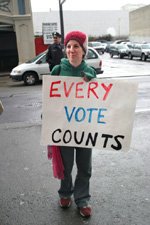 Remember Supervisor Michael Yaki? He lost re-election in December 2000, when the return of district elections ushered in a new generation of progressive leadership in San Francisco. On the Sunday night before his defeat, Yaki was dining at a restaurant in Nob Hill when he ran into State Senator John Burton. “What are you doing here?” yelled Burton. “You should be out in your District campaigning.” On Election Night, Yaki was so confident about getting re-elected that he and his wife went out to see a movie. When they walked out of the theater, he had lost to Jake McGoldrick by only 600 votes. Today is Election Day, and if politicians are wise, they should not waste a single precious moment before the polls close at 8:00 p.m. For their own political future, and if they care about democracy, they should be out in the streets talking to every possible voter and getting them out to the polls.

In our “winner-take-all” system of government, election results matter a great deal because they affect who will make the crucial decisions over the next two years. Even if a candidate barely wins or barely loses, nobody will remember what the margin was years later – which is why getting out the vote on the very last day is so important. In 2000, Supervisor Mabel Teng was so sure that she was going to win re-election that on Election Day she got her nails and hair done, went to the annual Election Day luncheon sponsored by Bob McCarthy, and went to Starbucks. She did spend part of the day shaking hands with constituents and passing out literature – but clearly that was not enough. She lost to Tony Hall by 39 votes. If Teng had spent the whole day talking to voters, or targeting identified supporters and making sure that they made it to the polling place, she could have possibly reached at least 40 more people.

Today, Democratic Party heavyweight Bob McCarthy and his partner, Angelo Quaranto, will hold their 26th annual Election Day Luncheon. It’s a long tradition in this town — where politicos, consultants, and elected officials gather and make predictions about what’s going to happen that night. But I won’t be there – and frankly, nor should you. In his book, Sidewalk Strategies: Seven Winning Steps for Candidates, Causes and Communities, local political consultant Larry Tramutola briefly mentioned the annual luncheon and said that he never really understood the purpose of it. “Voter turnout can increase 5% or more with a targeted and effective effort to remind people to vote,” he wrote. “These extra votes can often be the difference between winning and losing.”

If you want to schmooze with politicos and grab a few drinks, save that for your favorite candidate’s Victory Party. If you want to do this in a “non-partisan” setting, go watch the returns at City Hall. If you want a detailed analysis and discussion about the Election results, local pollster David Binder is doing his regular post-election presentation tomorrow at Noon. But between now and 8:00 p.m. tonight, it is your civic duty to be out talking to as many people as you possibly can – reminding them to vote. If you passionately care about a particular candidate or a particular ballot measure, help out on that campaign’s crucial get-out-the-vote effort. They need people to knock on doors, phone-bank, check the polling places and do rush-hour visibility.

Politics is a contact sport – not a spectator sport. If you’re part of the elite few who find politics fascinating, you shouldn’t be sitting on the sidelines just talking about it. I’m into politics because I passionately care about the outcome of this City, state and country – and I have strong opinions about who will or will not make this world a better place. Which is why I’m always reluctant to make predictions right before an Election. I don’t like to bet against my own interests, nor do I like to make bold pronouncements that are over-confident (as many of us were two years ago about John Kerry.) I’ve always believed that we must be the change that we believe in – and rather than spending time on Election Day predicting what will happen, we should be out working to pro-actively affect the outcome. As the old Army recruitment posters said, “Don’t Read History – Make it!”

At a time when most Americans — even in San Francisco — are so disenchanted with politics that they have tuned out on voting, why in the world would you spend your time on Election Day talking to political junkies? Your time on Election Day is better spent talking to people who may not vote, unless they are approached and given that last-minute reminder of where their polling place is. Having personally done get-out-the-vote work for the last ten years, I am always in disbelief at the number of people who forget that it’s Election Day. I’m not just talking about apathetic uninformed eligible voters – I’m also talking about passionate, engaged people who simply forget that they need to vote on that particular day.

“My vote doesn’t count” is a refrain that we always hear. One of my college professors once poo-poo’ed me when I insisted that every vote matters, as he replied that “you have a better chance of getting struck by lightning than your vote affecting the outcome.” On the one hand, it is extremely unlikely that an election will be so close that it gets decided by literally one vote. But a handful of votes can be decisive – and your influence as a citizen is not confined to merely casting your individual vote on Election Day. You can make the difference by actively getting ten, twenty or fifty people to come out and vote a certain way. Democracy is a numbers game, and in races where the outcome is still undetermined, you better believe that getting fifty people to vote will make a difference.

In 1990, Minnesota Senator Rudy Boschwitz went out to lunch on Election Day with his campaign staff at a Chinese restaurant. Some of the staff started wondering during the meal whether they should actually be out doing something to affect the outcome. When the check came, Boschwitz opened up his fortune cookie which said “you will be looking for a new job.” That day, one of the most popular and well-funded Senators in the country lost re-election to a passionate progressive Democrat who had run one of the most inspiring, energized and grass-roots underdog campaigns ever – Paul Wellstone.

EDITOR’S NOTE: Paul Hogarth always votes absentee because he’s too busy on Election Day getting other people out to vote. For feedback, contact paul@thclinic.org