Even SF Chronicle Writers Get Evicted 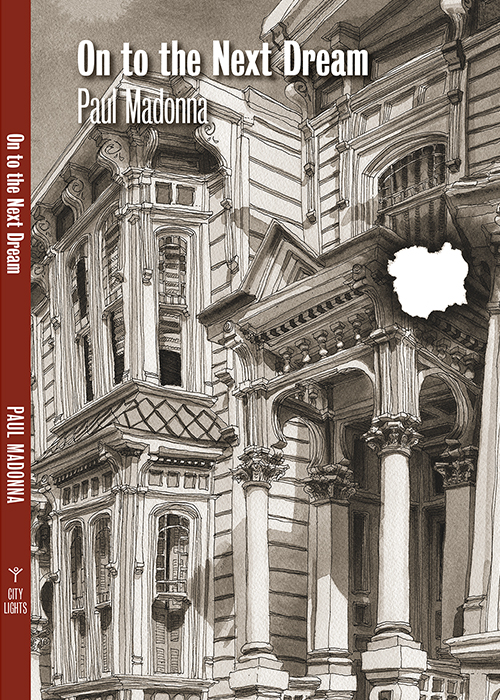 Paul Madonna is the author of the long running San Francisco Chronicle series, All Over Coffee. His new book, On to the Next Dream, offers an absurdist take on his eviction from his Mission District home of ten years. Absurdist, but all too real.

Madonna starts his book with a foreshadowing of future events that will lead readers to think he should give up writing for a career as a clairvoyant. He writes, “Imagine you’re on an airplane. It’s a long flight….You’ve already boarded, stowed your luggage, fastened your seatbelt and suffered the safety video….You’ve settled in and fallen asleep.

Now everything is shaking. You open your eyes to see a stewardess with her hand on your shoulder. “Excuse me,” she is saying.

‘Is there a problem,’ you ask…This time she grabs a fistful of your shirt. ‘You need to get up.’…She has already unbuckled your seat belt and is pulling you to your feet…You need to go, the stewardess says, and as she tugs you into the aisle a new passenger slides into your seat.”

This only seems to be an account of a recent United Airlines flight.

In Madonna’s telling, he has been replaced by another passenger because “the market has changed. We can now charge five times what you’re paying for your seat. Which means you have to get out.” When Madonna objects that he has already paid and it’s mid-flight, he is told “You were only renting. And we own. This is just the way things are.”

The story ends with the stewardess pushing Madonna out the airplane’s door.

Madonna should win a unanimous vote for best book opening of 2017.

Madonna’s opening story perfectly captures the feelings of those facing eviction from their homes  because a new owner wants them out. I have represented so many tenants who just assumed that they would stay in their current home for the rest of their lives. They knew that eviction was technically possible, but never felt it would happen to them.

Madonna’s less than 80-page, graphic filled meditation on his Mission District eviction connects the dreams he had for San Francisco with the harsh realities of the city’s housing market. He ultimately deals with his displacement by offering what he sees as “the story of every person who has ever wanted their version of the world to stay the same.”

But one critical part of Madonna’s story left me confused. He never explains the legal  basis for his eviction. He provides no details beyond a conversation with an attorney at the San Francisco Tenants Union who advises him not to move. The lawyer tells Madonna twice not to move but the author seems to ignore this advice. Instead he gets frustrated when the attorney “demanded I pay a donation.”

Madonna may be unaware that lawyers at the Tenants Union are volunteers and that the Tenants Union relies on donations and memberships to survive.  Madonna notes he was “angry,” but after being told twice not to move the book does not indicate why he did not follow that advice. Nor did he seem to do anything to fight his eviction.

I ask this question because Madonna is among many tenants who get eviction notices and then move without fighting the eviction. That is almost always a big mistake. As Director of the Tenderloin Housing Clinic I see firsthand how our attorneys stop evictions, and wish Madonna had consulted us.

I understand that Madonna may be in that group of tenants who does not want to wage a tough legal fight with their landlord. But before San Francisco tenants join Madonna and decide after getting an eviction notice that “it was time to let go. Time to move on,” please seek legal advice. It could well allow you to pursue new dreams while remaining in your longtime home.

Randy Shaw is Editor of Beyond Chron. He represented tenants facing eviction for decades.